ST. PETERSBURG – Amid demands by environmentalists that French nuclear waste deliveries to Russia via St. Petersburg cease, the French vessel Captain Lus put in to port in this city at 6:00 p.m. local time laden with depleted uranium hexafluoride, known as uranium tails. 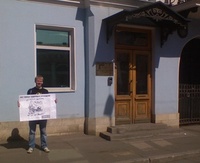 In protest of the ship’s arrival, Bellona stages a series of rotating one-person protests in front of the French consulate on the Moika Embankment in St. Petersburg.

The protests passed without conflict with city law enforcement – a first in the series of protests Bellona has been leading for most of the year against European uranium tailing shipments. According to police guarding the French Consulate, the protests drew the ire of France’s Consul General because of the current economic forum taking place in St. Petersburg.

During the pickets, environmentalists delivered an appeal to France’s Prime Minister François Fillon and Jean-Louis Borloo, France’s Minister of Ecology, Energy, Sustainable Development and Territorial Development to the Consul General.

“In accord with international principles, each country is responsible for waste produces on its territory,” reads the appeal signed by the Environmental Rights Centre (ERC) Bellona – Bellona’s St. Petersburg Office, Ecodefence, and Greeworld.

“We demand that the Republic of France respect this principle and cease import of dangerous radioactive and toxic waste to Russia with out waiting for any possible catastrophes during transport and storage of French depleted uranium hexafluoride, and to revoke the licenses allowing the formulations of contracts for export and transport of French depleted hexafluoride to Russia that have been given to the company EURODIF.”

The protesters in front of the consulate relieved each other in shifts, despite periodic strong rain showers in St. Petersburg.

Environmentalists also plan to follow the route of the uranium tails from their offloading in port to their delivery by rail to their intended storage site, taking measurements of the background radiation near the waste containers.

Uranium tails are a by product of uranium enrichment. They arrive in Russia from the German uranium enrichment Urenco and the Eurodif subsidiary of France’s Areva. Urenco has a contract with Russian nuclear fuel giant Tekhsnabexport (Tenex) to keep delivering uranium tails to Russia until 2009, and France until 2014.

The foreign depleted uranium hexafluoride has traditionally been sent for storage in Novouralks, near Yekatrinburg, Seversk, near Tomsk, Angarsk, near Irkutsk and Zelenogorsk, near Krasnoyarsk. The tails are sent to Russia under the auspices of re-enrichment, but since the contracts began, very little re-enriched uranium tails have been sent back to their countries of origin. 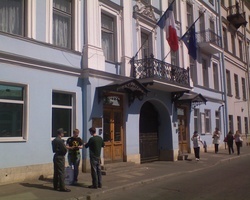 Russia is already home to more than 700,000 tons of depleted uranium hexafluoride.

The United States classifies uranium tails as waste, but many European countries, which see them as raw material for reprocessing and re-enrichment. Russia currently lacks a specific opinion on what, precisely, uranium tails constitute.

Sergei Kiriyenko, head of Russia state nuclear corporation, Rosatom, has been equivocal on the subject, promising not to renew French and German contracts for the import of the tails, which end in 2009 and 2014 respectively.

Article 48 of Russia’s environmental protection laws forbid the import of radioactive waste into Russia for any purpose. To sidestep this in the interest of fulfilling its foreign contracts, however, Rosatom currently classifies uranium tails as raw material for reprocessing.

Rashid Alimov reported and wrote from St. Petersburg and Charles Digges wrote and translated from Oslo.