ST. PETERSBURG – The MV Shouwenbank has put into this city’s port with yet another load of depleted uranium hexafluoride, known as uranium tails, from the German-Dutch uranium enrichment giant Urenco– the second such shipment in just over a month, the Bellona and Ecodefence environmental organisations say. 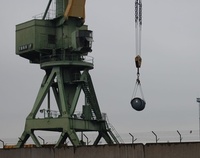 The ecologists will continue to follow the load, as they have done with previous loads brought by the Shoewenbank, and to take radiation background measurements. Bellona and Ecodefence have cooperated to organise a protest against the continued shipments of uranium tails that will take place tomorrow at 2:00pm, Friday April 18th.

Interested parties should call +7.921.995.6118 to find out the location of the protest. Former protests whose locations have been pre-announced have led to overwhelming and undue police intervention, according to Bellona’s organiser and editor of Bellona’s Russian language pages, Rashid Alimov.

When last a load of uranium tails was delivered to St. Petersburg, and activists took radiation levels of the delivery – which were 30 times above normal background radiation – while it was sitting in a railway switching station in a suburb of St. Petersburg, they were confronted by a guard wielding a Kalashnikov.

Two other peaceful demonstrations against the Urenco waste shipments were also broken up by police and protesters – Alimov among them – were arrested.

“A factual import of radioactive waste into the country is taking place,” said Alimov. “Transporting such loads presents an unjustified risk to residents of St. Petersburg and all Russian points along the rail route to Novouralsk near Sverdlovsk,” where the Urenco shipments have been sent since 2003, said Alimov. 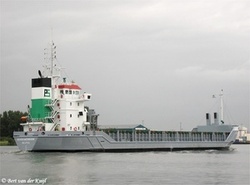 Urenco waste has also been sent to the Siberian cities of Seversk, near Tomsk, Zelenogorsk, near Krasnoyarsk, and Angargsk, near Irkutsk. Several reports from 2003 to 2005 by Russia’s former nuclear regulatory agency, Gosatomnadzor – which was divested of many of its biting teeth and re-dubbed Rostekhnadzor in 2004 – indicate that much of this waste was put out for storage in the open air.

This policy, read the reports’ understated conclusions, “does not correspond with contemporary demands of safety.”

According to assessments by British nuclear giant BNFL, a breach to the hermetic seals of containers of depleted uranium resulting in a leak during transportation, for instance, would lead to possibly lethal poisonous concentration within a 32 kilometre radius from the point of the leak.

The waste sent to Russia in the current shipment in St. Petersburg Port is from Urenco’s enrichment facility in Gronau, Germany and was loaded onto railcars to be sent to Russia a week ago. At the end of last week, the Shoewenbank was loaded and set to sea from Rotterdam.

According to the German Federal Ministry of Ecology, the contract that Urenco has with Russia to accept these shipments expires in 2009, but it has still not been decided whether the uranium tails will continue to be shipped after the contract runs out. Urenco representatives told the German newspaper Taz that the issue of extending the contract “is not being discussed at the moment.”

Such statements worry environmentalists as they could mean the contract will indeed be extended.

The contract between Urenco and Russia’s uranium enrichment monopoly Tekhsnabeksport (Tenex) provides for a total delivery to Russia of 100,000 tons of uranium tails, of which approximately 80,000 have already been received.

“By sending their tails to a Russian enterprise, Urenco is trying to shed its responsibility for radioactive and toxic waste on the cheap,” said Vladimir Slivyak, co-chairman of Ecodefence, one of the organiser of Friday’s demonstration, as well as previous ones.

“We demand a halt to this cynical and amoral business, which we are deeply convinced contradicts Russian legislation,”

In the United States, uranium tails have been classified as radioactive waste since January 2008 by decision of that country’s Nuclear Regulatory Commission. France and Germany still do not consider the material to be waste, and so send it to Russia.

Meanwhile, Russia is the one country in the world that accepts depleted uranium hexafluoride on an industrial scale from other countries.

Rashid Alimov wrote and reported from St. Petersburg and Charles Digges translated and edited from Oslo.