ST. PETERSBURG – In the late evening hours of Sunday, the load of radioactive waste that had arrived in St. Petersburg’s port from Germany’s Urenco enrichment corporation on Thursday set out by train for storage in Novouralsk in Central Siberia from a rail switching point in the populous Avtovo region of this city.

The 1,000 kilogram load of waste has already been the subject of vociferous protests that led to the arrest on Friday of Bellona Web’s Russian page editor Rashid Alimov and Andrei Ozharovksy of Ecodefence. Both activists were free three hours after their arrest without charge, but Alimov was fingerprinted and made to sign a document saying he would appear before police whenever he was summoned.

Activists unfurled a banner reading “No to Radioactive Waste Imports” as the train set off from Avtovo station Sunday night. Alimov reports that passers-by who saw the banner near the tracks – which wend their way through apartment buildings and past the popular St. Petersburg Children’s Circus – altered their course to get away from the waste train. 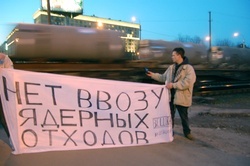 “It is worrying that the train with uranium tails was located for a considerable time next to a load of combustible oil materials,” said Alimov.

“In an accident, the population of St. Petersburg would have been subjected to unjustifiable risk.”

When heated to 54 degrees Celsius, uranium hexafluoride turns into gas and if the hemetisisation of the containers is compromised, the gas is released within minutes. Such a leak, according to research by Britain’s BNFL nuclear corporation, a lethal concentration of the gas could be reached within a 32 kilometre radius of its release.

The transport of this most recent load was delayed for two days, and the security surrounding the train was fortified, possibly as a result of the high profile environmental protests.

On Friday, activists unfurled a banner reading “No to Radioactive Waste Imports” from a bridge across the railroad tracks, chanted “Send the waste to Putin’s Dacha” – in reference to the summer home of President Vladimir Putin near St. Petersburg – and lit signal fires. Alimov and Ozharovsky were detained by the Kirov District Police. Ozharovsky is filing a complaint with the St. Petersburg prosecutors because police ripped his coat while man handling him.

Towns endangered by the shipment
The waste, according to sources familiar with the delivery who work within the railway department, will leave St. Petersburg, and pass through the towns of Mga, Posadnikovo, Tikhvin, Yefimovskaya, Podporozhe, Babayevo – where the engine will be changed, and then to Cherepovets, Vologda, Buye, Galich, Sharya, Kirov, Perm, and finally Novouralsk.

The souces also indicated that the route could follow an alternate path after Posadnikov would take it thorugh Nebolchi, Kabozha, Pestrovoa, Sonkovo, Rybinsk Yaroslavl, then Buye or Nerekhta to Krostoma, where will then follow the rest of the route from Galich to Novouralsk.

The residents of these towns are all vulnerable should any accidents occur, as are the railway workers who will be bringing it to its destination.

Railway workers told of dangers
During Friday’s protest, activists also handed out fliers addressed to railway workers, reading: “The rail transport of (nuclear waste) is a potential dangerous operation, and therefore railway workers coming on duty in the next three to four days must be exrememly careful. The first to be hurt in the event of an incident could be Russian railway workers.”

Uranium tails
Depleted uranium hexafluoride is a byproduct of uranium enrichment arising during the production of nuclear fuel for nuclear power stations, as well as for the enrichment of uranium for weapons purposes.

Russian legislation forbids the import of radioactive waste into the country.

“Especially cynical is this newest load of radioactive waste, which takes place on the 22nd anniversary of the Chernobyl disaster,” the activists said.

Rashid Alimov reported and wrote from St. Petersburg and Charles Digges wrote and translated from Oslo.