ST. PETERSBURG – Two activists – one from Bellona and one from Ecodefence – were arrested during a protest the two organizations arranged against the ongoing shipments of depleted uranium hexafluoride from German enrichment giant Urenco, another load of which put in to the Port of St. Petersburg Thursday. 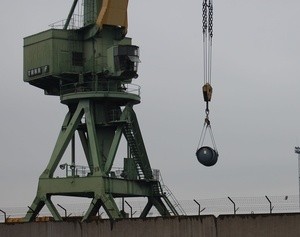 The Bellona activist who was arrested while the demonstration was gathering in the Avtovo region of St. Petersburg was Rashid Alimov, editor of Bellona St. Petersburg’s Russian pages. Andrei Ozharovsky of Ecodefence was also arrested, though his passport was taken by officers and his coat was ripped in the scuffle.

After being arrested while talking to journalists, Alimov was freed three hours after being brought to the 31st precinct in the Kirov Region of St. Petersburg.

The protest drew activists of many stripes and organizations from Bellona and Ecodefence to the Yabloko liberal party, the Other Russia coalition and St. Petersburg’s anarchists group. 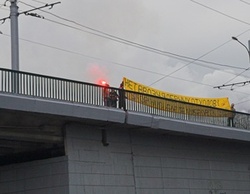 He was not charged with anything, and Bellona St. Petersburg’s legal advisor was present at the police station

Ozharovky is meanwhile filing a report with the prosecutors office of St. Petersburg for ripping his jacket, said Alimov.

The area of the protest had been kept secret and available to interested parties only by calling the activists by telephone to avoid skirmishes with police that have characterised past protests against the uranium tails shipments.

The activists and journalists were to meet at Avtovo and proceed further in their demonstration. But according to Krivonos, protestors were greeted by an overwhelming police force that was already there lying in wait, including five police cars and a van bearing approximately 15 to 20 uniformed officers and other in plain clothes.

The protest was against the arrival of the MV Shoewenbank freighter from the port of Rotterdam carrying 1,000 tons of depleted uranium hexafluoride sent from Urenco’s enrichment facility in Gronau, Germany.

Import of nuclear waste
“A factual import of radioactive waste into the country is taking place,” said Alimov. “Transporting such loads presents an unjustified risk to residents of St. Petersburg and all Russian points along the rail route to Novouralsk near Sverdlovsk,” where the Urenco shipments have been sent since 2003, said Alimov yesterday in comments prior to the protest.

Urenco waste has also been sent to the Siberian cities of Seversk, near Tomsk, Zelenogorsk, near Krasnoyarsk, and Angargsk, near Irkutsk. Several reports from 2003 to 2005 by Russia’s former nuclear regulatory agency, Gosatomnadzor – which was divested of many of its biting teeth and re-dubbed Rostekhnadzor in 2004 – indicate that much of this waste was put out for storage in the open air.

This policy, read the reports’ understated conclusions, “does not correspond with contemporary demands of safety.”

According to assessments by British nuclear giant BNFL, a breach to the hermetic seals of containers of depleted uranium resulting in a leak during transportation, for instance, would lead to possibly lethal poisonous concentration within a 32 kilometre radius from the point of the leak.

History of the German waste
The waste sent to Russia in the current shipment in St. Petersburg Port is from Urenco’s enrichment facility in Gronau, Germany and was loaded onto railcars to be sent to Russia a week ago. At the end of last week, the Shoewenbank was loaded and set to sea from Rotterdam.

According to the German Federal Ministry of Ecology, the contract that Urenco has with Russia to accept these shipments expires in 2009, but it has still not been decided whether the uranium tails will continue to be shipped after the contract runs out. Urenco representatives told the German newspaper Taz that the issue of extending the contract “is not being discussed at the moment.”

Such statements worry environmentalists as they could mean the contract will indeed be extended.

The contract between Urenco and Russia’s uranium enrichment monopoly Tekhsnabeksport (Tenex) provides for a total delivery to Russia of 100,000 tons of uranium tailings, of which approximately 80,000 have already been received.

“By sending their tails to a Russian enterprise, Urenco is trying to shed its responsibility for radioactive and toxic waste on the cheap,” said Vladimir Slivyak, co-chairman of Ecodefence, one of the organiser of Friday’s demonstration, as well as previous ones.

“We demand a halt to this cynical and amoral business, which we are deeply convinced contradicts Russian legislation,” he said.

The German subsidiary of the German-Dutch Urenco joint venture is owned by two large-scale German energy giants, E.On and RWE.

According to information given to Ecodefence by the board of directors of both companies, Russia has received 80,000 tons of radioactive waste in the form of uranium tails – a byproduct of uranium enrichment – from Urenco. Another 20,000 tons expected that under the terms of a contract Urenco has with Russia’s uranium enrichment monopoly Tekhsnabeksport (Tenex).

The French concern Eurodif also sends depleated uranium hexafluoride to Russia on a contract that runs out in 2014.

In the United States, uranium tailings have been classified as radioactive waste since January 2008 by decision of that country’s Nuclear Regulatory Commission. France and Germany still do not consider the material to be waste, and so send it to Russia.

Meanwhile, Russia is the one country in the world that accepts depleted uranium hexafluoride on an industrial scale from other countries.