ST. PETERSBURG – The offloading of a cargo of radioactive waste from a German ship onto railroad cars was underway in the port of St. Petersburg amid protests from Bellona and Ecodefence who were on hand to observe radiation levels. 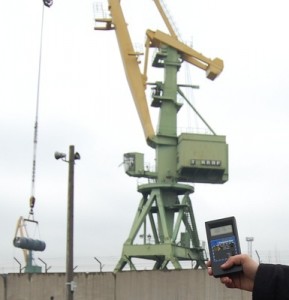 Some unexplained America radwaste containers were also present among the load of German waste, environmentalists observing the offloading procedure said.

Environmentalists with the Bellona and Ecodefence say the offloading of the MV Shouwenbank – which carried 2,000 tons of radioactive waste into the Port of St. Petersburg in January – unloaded another 1,000 tons in about 75 containers on Thursday. The waste arrived from the Gronau facility of the German-Dutch Urenco enrichment corporation.

The environmentalists will continue to follow the load as it is transported by train and to measure background radiation until it reaching its destination, most likely Novouralsk in the Ural mountains. (Photos of the offloading – link)

A protest arranged by Bellona and Ecodefence is scheduled for 4:00 p.m. Saturday at the corner of Nevsky Prospekt and Maloy Konyushennoy in St. Petersburg. All who have an interest in stopping the shipments of German uranium tails to Russia are invited to attend.

“The transport of such materials subjects residents of large cities, like St. Petersburg to an unjustified danger from toxic and radioactive hazards,” said Rashid Alimov, editor of Bellona Web 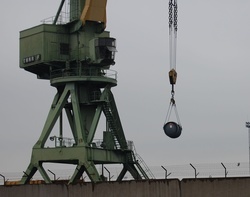 The agreement is facilitated by USEC, the American enrichment corporation. Officials responsible for the Megatons to Megawatts programme could not immediately be reached for comment about why American containers were turning up in the German waste shipments.

Officials US Department of Energy (DOE) and National Nuclear Safety Administration – a semi-autonomous subdivision of the DOE – who have been queried by Bellona Web about the presence of American radwaste containers among the German shipments have said the containers must be part of the Megatons to Megawatts programme.

However, observations by Bellona indicate that the containers clearly indicate in English that they contain depleted uranium hexafluoride.

Asked again on Thursday about the American containers, a highly placed official with the DOE, who requested anonymity because he is not allowed to speak publicly on this issue, told Bellona Web in an email: “The United States regards uranium tails as radioactive waste, and the DOE and the NNSA do not have any waste shipment agreements with Russia,” the official wrote.

“Russia has more than enough depleted uranium hexafluoride to enrich, so I don’t see why they would need US tailis, but I cannot explain the presence of American containers among the shipment,” the official concluded.

Ecologists at the site of the offloading also noted that the containers were being transported by vans to the railhead from which they will depart for Siberia without police accompaniment, which is a violation of Russian highway regulations.

Uranium tails – waste or raw reprocessing material?
Since 2003, the German uranium tails have been shipped to Novouralsk. Other tails from Germany, the Netherlands and France have been sent are Seversk, near Tomsk, Angarsk, near Irkutsk, and Zelenogorsk, near Krasnoyarsk.

“By sending their tails to Russian facilities, Urenco is attempting to get rid of the responsibility for their radioactive and toxic waste on the cheap,” said Vladimir Slivyak, co-chairman of Ecodefence.

“We demand cessation of this cynical and amoral business, which we are deeply convinced contravenes Russian legislation.”

Rosatom chief Sergei Kiriyenko said last year that he would sign no new contracts with Urenco or the French Eurodif enrichment firm for delivery of uranium tails, thus admitting indirectly that the initial agreement was a mistake.

Nevertheless, the conditions of the contract, which expire in 2009 and 2014, are unknown and no one can say whether it contains language for its automatic renewal.

Ecodefence asserts that the export of uranium tails is also a violation of German law. Environmentalists have filed suit with the Prosecutor of Munster, Germany.

As noted by the DOE official, the United States considers uranium tails to be radioactive waste by a decision of the Nuclear Regulatory Commission on January 18th 2005. Many European countries on the other hand still prefer not to consider the material waste and send it on to Russia.

Russia is the only country in the world that accepts uranium tails from abroad on an industrial level. Uranium tails are what is left over after the enrichment process for power producing uranium is complete.

Russia has already amassed some 700,000 tons of uranium tails form within the country and abroad, for which there are no long terms plans, meaning most of the tailings are sent here as waste.

Article 48 of the Russian Law on the Environment forbids the import of radioactive waste and nuclear materials whatever the intentions. The tailings, however, are shipped to Russia under the label of raw material for reprocessing.