Norway’s foreign minister has announced plans to donate $5 million toward the creation of an international uranium fuel bank, a concept that was forwarded to discourage developing or “rogue” nations from pursuing nuclear power and weapons by controlling the atomic energy client list.

Published on February 27, 2008 by Charles Digges 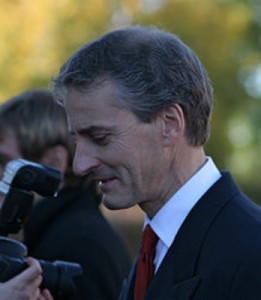 But many international environmental organisations, including Norway’s Bellona, have expressed concern over the sort of damage that the massive nonproliferation effort will entail.

The International Atomic Energy Agency (IAEA) has been considering several sites in which to situate this bank – one located in Angarsk, Russia, another in Germany – since it was gifted $50 million by American investment tycoon Warren Buffet in 2006. Buffet gave the money on the condition that other nations raise the additional $100 million estimated for realisation of the project.

The United States contributed $50 million toward the project in May 2007, and Store announced that: “Norway plans to lead an effort to raise the remaining $45 million” needed for the fuel bank.

Nunn praised Norway’s announcement, saying: “Norway’s financial and political commitment to the fuel bank is an important and impactful step forward in our efforts to address the daunting challenges associated with the spread of nuclear technology.”

While supporting the nonproliferation goals behind building a multi-national fuel bank, Bellona urged caution in moving too hastily.

"While Bellona realises the importance of putting the nuclear fuel supply under multi-national purview, we urge Store to donate this money with all due consideration for the environmental impact such a nuclear fuel bank will cause in the territory where it is eventually built," said Bellona’s Nils Bøhmer.

"It is clear from studies conducted by Bellona that the proposed Angarsk facility meets neither the nonproliferation requirements of the IAEA, which will ultimately be responsible for the centre, nor the requirements of environmental nuclear safety that must be observed in Russia’s already damaged ecological condition."

Old ideas new again
The fuel bank idea – something that was dusted off from the annals of the administration of US President Dwight Eisenhower – has gained momentum in recent years among western nations that are afraid of nuclear proliferation in Iran, which had made several important advances in its uranium enrichment programme.

“The ultimate goal, in my view, should be to bring the entire fuel cycle, including waste disposal, under multinational control so that no one country has the exclusive capability to produce nuclear weapons,” said IAEA Mohamed ElBaradei at the conference in Oslo.

“I don not believe that any country will give up its right to engage in fuel cycle activities unless the multinational framework is based on equal rights and obligations for all participants.”

Russia out on the Ritz to clinch enrichment centre
Though a number of other countries have forwarded ideas of their own about creating the fuel bank – which would also include nuclear reprocessing services and storage of pure nuclear waste – on their territory, Russia has probably stumped the loudest under the direction of Sergei Kiriyenko, director of Russia’s federal atomic energy agency, Rosatom.

Almost as soon as the IAEA made its announcement that it would be looking into various locations, Kiriyenko swung into action with the zeal of promoting an Olympic bid, and announced the facility would be built on the territory of the Angarsk Electrolysis Chemical Combine in Siberia, which has long experience enriching uranium and producing fuel.

Kiriyenko also announced a vacancy for co-founders of the centre, promising them access to the supply.

“Any co-founder of the centre would have the right to not only use uranium enrichment services, but also take part in its management, thus having access to the information on its product costs and pricing principles,” Kiriyenko said.

“This in turn will ensure transparency of the enriched uranium supplies. Furthermore, co-founders will receive dividends from the income earned on uranium enrichment services.”

Kiriyenko was backed up weeks later by Russian First Deputy Prime Minister Sergei Ivanov, who promised the centre’s goods would be open for the picking by any country willing to help build it.

Uranium-rich Kazakhstan was first in line to join Russia in the project, and the creation of the joint Russian-Kazakh International Uranium Enrichment Centre was off to a rolling start.

Environmentalists toss their underwear in protest
Within days of Kiriyenko’s announcement, however, locals environmental groups in Siberia registered their protests loudly.

A group of local women attempted to present Regional Governor Alexander Tishanin with a pair of lead underpants, and vowed to churn them out on assembly lines if the Angarsk centre was realised.

But lead panties may not be heavy enough to outweigh the warm endorsement of the centre’s realisation in Angarsk by the United States.

John Rood, assistant US secretary of state for international security and nonproliferation, told reporters that the United States, “supports Russia’s initiative with Kazakhstan government support on the Angarsk International Uranium Enrichment Centre which will be open for many countries" according to the US State Department website.

Environmentalists have warned sternly that the construction and operation of the plant – to be located 30 kilometres from the Siberian city of Irkutsk and 100 kilometres from Lake Baikal, the world’s deepest lake – will inevitably pose yet more nuclear woes for Russia: As Russia will produce uranium fuel for a number of nations, so, too, will it be obligated to reclaim the spent nuclear fuel once it is burned in foreign reactors – especially for those countries that have little to no nuclear storage space of their own.

Environmental damage Russia’s cross to bear, says US State Dept.
And the US State Department seems unperturbed by that, as well as any other environmental hazards that will arise.

“It is hoped that the Russians can deal with any associated environmental risks – this is, in essence,” said the official.