ST. PETERSBURG-Three ecologists – two from Bellona – were detained by police near St. Petersburg today while trying to measure radiation levels around a load of uranium tails sent to Russia from Germany.

The activists were released about an hour later.

Rashid Alimov, editor of Bellona’s Russian pages, along with Alexey Snigirev, also of Bellona, and Tatyana Kulbakina, of Murmansk’s Nature and Youth, where arrested near the Izotop radioactive waste facility in the Leningrad Region.

A photographer with the newspaper Moi Raion was also detained with the activists.

Alimov said by telephone that he and the other activists established that radiation background levels around the waste were higher than normal. No reason for the detention was given by police.

On January 24th, Bellona and Ecodefence, another Russian environmental organisation, staged a protest against continuing shipments of uranium tails to Russia from Germany in central St. Petersburg.

Specifically, the protest, in which some 40 environmentalists participated, was aimed at the arrival of the MV Shouwenbank, which arrived in St. Petersburg carrying 2,000 tons of uranium tails – the radioactive and toxic waste produced during uranium enrichment. 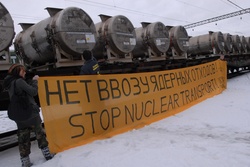 See also an article by the St Petersburg Times : Environmentalists Held For Trying to Measure Radiation