ST. PETERSBURG – Protestors from the Russian environmental groups Bellona and Ecodefence will greet 2,000 tons of uranium tails arriving in the port of St. Petersburg for transport to Siberia Thursday, representing yet another Russian public demonstration against the persisting shipments of radioactive waste from Germany.

Published on January 22, 2008 by Vera Ponomareva, translated by Charles Digges 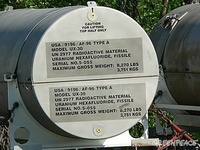 Upon its arrival, the shipment of uranium tails will go by road from St. Petersburg to Kapitolovo, where the Izotop facility is located. It will then be loaded on a train and delivered most likely to Novouralsk, in the Sverdlovsk Region of Central Siberia, for storage, where the German shipments have been going since 2003.

Environmentalists will greet the German freighter MV Shouwenbank with protests on Thursday at 1:00pm when the ship is scheduled to put in. Environmentalists plan to follow the shipment from port to where it will be loaded onto railway cars and sent to storage.

“Transport of such loads is extremely dangerous. They are prone to accidents with broken hermitic seals on containers, which could poison a huge number of people, which could lead to the toxic and radioactive contamination of significant portions of land, as well as large cities,” said Rashid Alimov, of Bellona-St. Petersburg, and editor of Bellona Web’s Russian pages. Aside from that, noted Alimov, Russia is already a dumping ground for more than 700,000 tons of uranium hexafluoride – uranium tailings.

In November 2007, a truck carrying radioactive waste form St. Petersburg’s Konstantin Physics Institute to the Radon nuclear waste storage facility in the Leningrad Region overturned on slippery roads. The load remained within the truck and nothing leaked, but the dangers are apparent.

Piled up tails – waste or raw reprocessing material?
The uranium tails, which are formed during uranium enrichment at German-Dutch enrichment firms, are the property of Europe’s Urenco. Since 1996, more than 80,000 tons of this waste has been imported to Russia. As per the condition of a contract valid until 2009, Russia is awaiting some 20,000 more tons of the waste from Urenco. The waste is then delivered to one of four possible locations in Siberia: Novouralsk, Seversk, Angarsk or Zelenogorsk.

This is in contravention of Russian legislation banning the import of pure radioactive waste. However, the uranium tails squeak through customs by being labeled raw material for reprocessing.

Many European nations do not view tails as radioactive waste. Russia is far from clear on the issue. Yet, viewing tails as waste is consistent with the view taken by other countries, like the United States, which in January 2005 transferred responsibility to its Department of Energy (DOE) which manages US radioactive waste.

“By sending their tails to Russian companies, Urenco is trying to shed responsibility for radioactive and toxic waste on the cheap,” said Ecodefence co-chairman Vladimir Slivyak. “We demand a stop to this cynical and amoral business, which, by our convictions, contradicts Russian legislation.”

Rosatom hints uranium tails may be waste
Sergei Kiriyenko, chief of Russia’s nuclear agency Rosatom, declared last year that no new contracts with Urenco were forthcoming, tacitly acknowledging the original contract had been a mistake. Nevertheless, the conditions of the contracts that run out in 2009 and 2014 are unknown, and it is unclear whether their language contains anything stipulating that they will automatically be renewed.

In Ecodenfence’s opinion, the export of uranium tails is also in contravention of German law. Ecologists have already appealed to prosecutors in Germany regarding Urenco’s possibly illegal activities.

German activists protest shipments
German activists that came out against the shipment due in St. Petersburg on Thursday accompanied it with many protests. Seven anti nuclear protests took place along the rail line from Gronau to Rotterdam.

In Gronau, where the German enrichment facility is located, environmentalists took readings of the radiation background surrounding the railroad cars bearing the tails in the presence of police. At a distance of three metres, the level measured 0.38 microsieverts, higher than the norm of 0.10 to 0.13 microsieverts.

“This shows how the dangers of such transports have been criminally underestimated by the bureaucrats,” said Mattias Eickhoff, a member of a regional network of anti-nuclear-groups around Gronau, Germany. “They are dangerous first of all for Urenco workers, railroad workers, the police, who accompany the loads, as well as for railroad passengers.”

Some minutes after the train’s departure in the early morning hours of January 17th, the train was stopped for more than six hours – when one activist, Cécile Lecomte, suspended herself across the tracks from ropes attached between two trees at a height of seven metres. Police cut Lecomte down after six hours.

“We are protesting the export of German radioactive trash abroad,” Lecomte told German reporters. “Thousands of tons of radioactive waste lie in the open in Russia.”

Then, on January 18th, as the containers of waste were transferred to the ship in Rotterdam, Greenpeace’s Argus vessel sailed into port. The transfer of the containers was halted temporarily. As a result, the shipment was delayed in port for more than two hours.

In October 2007, as another shipment of uranium tails arrived in St. Petersburg on the German Doggersbank freighter, environmental protesters gathered at the Legislative Assembly. St. Petersburg police broke up the protest, but activists nonetheless succeeded in passing an appeal to city legislators and the city governor. Environmentalists had earlier appealed to the transport and nature conservation prosecutors’ offices regarding the shipments of tails.