ST. PETERSBURG – Nine activists against of Russia’s policy of importing radioactive waste, including Bellona’s Rashid Alimov, were arrested Thursday during a protest in St. Petersburg where the ship Doggersbank put in to port with a load of uranium tails from Germany.

Published on October 11, 2007 by Bellona, translated by Charles Digges

The protest, held in front of St Petersburg’s legislative assembly building, was organised by members of Bellona, Ecodefence!, and an array of other protestors who came to the scene bearing a paper mache ship.

Within minutes they had also unfurled a banner reading in both English and Russian ”Stop Nuclear Transport!”

The protestors were released several hours later from the Admiralteisky Regional police station around 7:00pm, and charged with administrative violations, brought because the protest – despite several advance requests by protestors to authorities – was unsanctioned.

“The actions of the bureaucrats, who baseslessly forbade the protest, and the police, who used physical force against peaceful demonstrators, was directed at in intimidating the activists and preventing future protests against the import of nuclear waste," Ecodefence! co-chairman Vladimir Slivyak, on of the detained demonstrators, told Bellona Web.

Alimov, Editor of Bellona Web’s Russian-language pages who was detained with Slivyak and seven others, agreed.

“We consider the dangers of importing nuclear waste into Russia to be too high to remain silent about it,” he said after his release Thursday evening. Alimov said all arrested participants had their mug shots taken by Sergei Nabokin of the St. Petersburg police UBOP, or anti-organised crime division.

Appeal passed by protestors to the Legislative Assembly
The protestors managed to pass an appeal to stop the import of nuclear waste through St. Petersburg to the city’s legislative assembly prior to arrest. 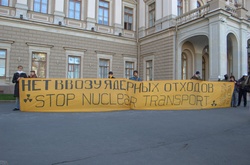 In recent months, Bellona Web has send analogous requests to RosTekhNadzor, the Russia Federal Service for ecological, technical and atomic oversight – that organ responsible for regulating safety in the nuclear industry. But no answers have been forthcoming and Bellona Web lawyers are considering turning to the courts to have the information released.

Over the last six months, environmental protests against nuclear transport have taken place in the Russian cities of Yekatrinburg and Tomsk in Siberia, as well as in The Netherlands and Germany. In October 2006, Bellona and Ecodefence! conducted similar protests in front of the German Embassy in Moscow.

At present, the greens of The Netherlands have initiated a suit against the Dutch Government with the aim of cancelling its licence to deliver uranium tails to Russia.