NEW YORK – First deputy prime minister of Russia, Sergei Ivanov, said any country willing to help foot the bill for building the Angarsk International Uranium Enrichment Centre in eastern Siberia will receive fresh uranium supplies for its own nuclear programmes from the facility.

Published on October 25, 2007 by Charles Digges 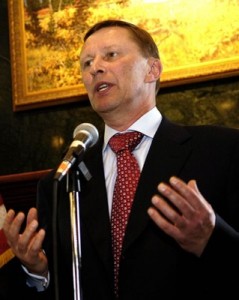 The statement by Ivanov, reported by RIA Novosti Russian newswire, represents something of a departure from what the International Atomic Energy Agency (IAEA) and the US government envisioned when giving their endorsements of the project. Initially forwarded as a way to control uranium supplies to states viewed as ‘rogue nations,’ Ivanov’s assertion opens the nuclear fuel supply to anyone with the cash to pay for it.

The centre, part of Moscow’s non-proliferation initiative to create a network of enrichment centers under the UN nuclear watchdog’s supervision, will be based at a chemical plant in Angarsk. The centre will also be responsible for the disposal of nuclear waste – another proposition that exceeds Russian legislation, which forbids the import of pure nuclear waste for storage on Russia territory.

Russia has been somewhat stuck for attracting potential partners in the Angarsk project and only have a commitment from one other country – the former Soviet Republic of Kazakhstan, which holds 15 percent of the world’s uranium reserves.

"So far we have only cooperated with our Kazakh partners in this field," Ivanov said, according to RIA Novosti.

Kazakhstan partnered up with Russia on the project in October 2006, signing documents that will establish cooperation beginning in 2013.

Ivanov said a board of directors had already been formed for the International Uranium enrichment Centre, as well as a general director appointed for the relevant open joint stock company, RIA Novosti reported, though Ivanov failed to name names.

More countries expected to join in
The Russian-Kazakh agreement and corporate establishment documents for the Centre envision the participation of other countries as well.

"This is only a beginning, and we still have to do a lot, the more so considering that other countries have shown interest [in the project]," Ivanov said.

Ukraine’s Fuel and Energy Ministry said in June that the country intended to join the project in the near future.

Ivanov invoked an increasingly popular argument for the establishment of a centre that would enhance the nuclear industry worldwide: namely that oil and gas reserves were highly contingent on geopolitical crises in regions that have enormous oil reserves.

“The trend is not improving,” said Ivanov and asserted that nuclear energy was the surest way to assuring energy autonomy for many nations.

Ivanov said that due to the depletion of hydrocarbon reserves, the world is increasingly looking to nuclear energy as an alternative. He added that oil and gas supplies were highly contingent on military and political situations, which have been unstable of late in the main producing regions. "And the trend is not improving," Ivanov added.

Environmental and proliferation risks
Many countries have adjusted their power generation programmes, increasing their overall use of nuclear energy – a dangerous trend in the view of the Bellona foundation, which is raising the alarm both about the Angarsk Centre, and the international trend toward nuclear power as an alternative to greenhouse gas producing fossil fuel plants.

"The amount of nuclear power generation in Russia is not great, only 15 percent, with 80 percent in France and 30 percent in Germany, but Russia will build two nuclear power units annually in order to increase its share to 27 percent by 2030," Ivanov said.

Russia currently accounts for 40 percent of the world’s enrichment facilities, he added.

Ivanov’s remarks, however, ignore serious questions about the amount of radioactive waste and spent nuclear fuel Russia would have to absorb – on top of it’s already enormous amount of domestic spent nuclear fuel that it cannot safely store – as stipulated by international agreements. These agreements specify that countries producing nuclear fuel for others are obligated to take back the spent product if the consumer country has no safe storage of its own.

As yet, no country in the world has come up with a way to permanently store radioactive waste safely, which makes nuclear power, in Bellona’s view, a dubious proposition for solving the current global climate change crisis. In short, nuclear power replaces one form of pollution with another that is equally dangerous for thousands of years to come.

Ivanov’s assertion that the Centre will be open to all comers who have the money to help build it also compromises the notion that the Centre will help serve as a bulwark against nuclear proliferation. Iran, one of Russia’s chief nuclear partners and the focus of worldwide anxiety over what the West claims is its nascent nuclear weapons programme, would, in Ivanov’s framework, be a welcome customer. Replete with oil cash, the Islamic republic has almost complete a $1 billon reactor that is scheduled to go online next year.

Other Middle Eastern countries, wishing to sell their oil reserves to an oil addicted West have also said they would like to build nuclear power plants. France is helping Libya in this regard.

Ivanov said fuel for nuclear power plants was a market product and any country represented in the International Atomic Energy Agency that was also signatory to the Nuclear Non-Proliferation Treaty (NPT) had the right to buy it. Signatories to the NPT include Iran.

"But this is only in theory," Ivanov said, according to RIA Novosti.