The Murmansk Region has accumulated a large amount of spent nuclear fuel from nuclear icebreakers. The spent nuclear fuel (SNF) is being stored in floating technical bases – three highly radioactive nuclear service ships called the Lotta, the Imandra, and the Lepse – as neither regional authorities nor the country as a whole have suitable storage facilies. 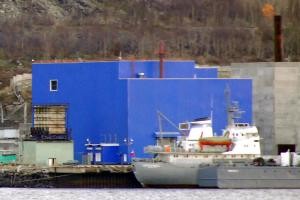 Atomflot has therefore constructed a safe, on-land storage facility that will significantly decrease the dangers of storing radioactive waste in the Murmansk area.

“This is the first such project in Russia, that is, the first container-type storage facility for SNF in Russia,” said Sergei Zhavoronkin, director of Bellona-Murmansk. He said the technologies used on the storage facllity project could be applied at other facilities, in particular at the nototious Andreyeva Bay.

“This is a multi-faceted project,” Mustafa Kashka, deputy technical director of Russia’s Northern Nuclear Fleet told Bellona Web. “Implementation will enable us to raise the safety level for fuel storage, because on-shore storage is more secure than (storage) at sea.”

“On the other hand, the storage facility will enable us to unload the Lotta base, and free up vessels so they can take more active part in getting fuel off submarines,” Kashka said.

Project technical characteristics
The container-type SNF storage facility is meant to store fuel that at present cannot be reprocessed due to Russia’s lack of state-of-the-art reprocessing technology. The fuel can be stored at the facility for up to 50 years.

The facility is designed to hold 50 TUK-120 ferroconcrete containers. The transportation assemblage guarantees nuclear and radiation safety during transportation, loading and unloading of SNF and during SNF storage operations.

The TUK-120 cask was developed specially to transport and store SNF from nuclear submarines. It includes three hermetically sealed barriers that guarantee secure storage of SNF.

During development of the TUK, research was carried out into long-term dry storage of SNF that proved that storing SNF in an inert medium and preventing moisture from entering the cask’s environment would see storage lifetimes limited only by normative demands on control of the fuel state, and could reach 50 years of safe storage time.

Following a positive testing programme, the container was certified to Russian and international standards. The containers are built to withstand fire, flooding, and major shocks like aircraft impact.

“Cutting-edge technologies were used during the design of the containers. The containers were made at Sevmash and meet all requirements. The constructions have been through serious tests,” Zhavaronkin said.

Project history
Originally, Atomflot planned to build a storage facility for SNF from nuclear transport reactors. The facility was planned to be large-scale, but construction started during Perestroika and was later halted.

Building No. 5 at Andreyeva Bay, where construction was suspended, was later restructured as a dry storage facility.

“We must give the British their due,” Kashka told Bellona Web. The British company Crown Agents won a contract from the British Department of Trade and Industry, and both administer and provided oversight for the project.

The final touches on the project coincided with the reorganization of a number of Russian government organizations, as a result of which no government expertise bodies were working for six months.

“The British side trusted us, which meant we were able to reduce project implementation time by a year, thereby making significant financial savings,” Kashka said.

Project planning started in December 2003, construction work got under way in 2004, and a state commission finished the storage facility in August 2006.

“The short agreement period for all documentation and construction of such an important facility is very important,” Zhavoronkin said. “It is good that we did not get bogged down in red tape. I can say with certainty that British taxpayers’ money was well spent.”