An international conference on Multilateral Technical and Organizational Approaches to the Nuclear Fuel Cycle with the Aim of Strengthening Nonproliferation Efforts, organized by Rosatom and the IAEA, took place in Moscow, July 1315. Prior to the start of the conference, the head of Rosatom, Aleksandr Rumyantsev, and a representative from the IAEA, Yuri Sokolov, held a press conference, at which our correspondent was present. 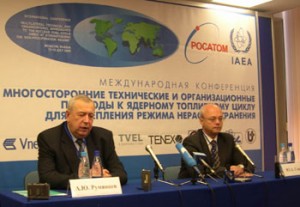 For starters, here are two lyrical digressions, the first of which is rather high-minded. Half an hour before the press conference, I bore witness to an activist from Greenpeace, having ascended the towering pedestal of the God of Trade, which stands before the location of the conference, the World Trade Center in Moscow. He hurried not when returning to the sinful earth, upon which two policemen and two World Trade Center security guards awaited him.

Above, by the statue of the God Hermes, a banner with the English words Here they sell our future waved in the breeze. Finally the activist descended, and was arrested.

The second of my digressions is more down-to-earth. Every time I arrive at an event hosted by Rosatom, I see well dressed people and tables, generously set for the coffee break. I know perfectly well that I, a journalist, will be given a bulging press-release packet filled with a program, a nice little nametag and some other junk, after which I will be lead into a beautiful conference room. Then the main figures of the press-conference will begin taking questions.

But they rarely give to-the-point, concrete, sincere, exact, certain, or even full or objective answers, because honestly, as it seems to me, they really couldnt care less what we write, or even if we write anything at all. They have their own games, their own rules, and their own parties. The Russian people, however, and their representatives in the media, seemingly dont get to join them. Apparently, someone told them one time that the nuclear industry is the domain of the chosen, and that much, or better yet all of it, should be shrouded in secrecy. There is one principle to their thought process: the less you know, the better you sleep at night. 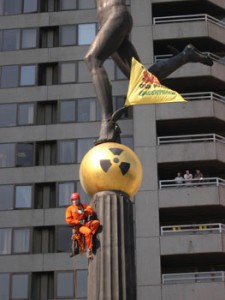 To an awkward question posed by one of the journalists Rumyantsev responded with a reproach, stating, youre a journalist, arent you? Youre supposed to work with the facts. Meanwhile, or so it seemed to me, the director himself assiduously avoided the very same facts. Except for one: that the conference had begun.

Sokolov further addressed the issue of the overall volume of the worlds spent nuclear fuel, adding that, if one were to gather all the spent fuel assemblies together in one place, they would be roughly equal in size to an average four-story, three-entryway apartment building. And, he continued, if one were to make a prediction for the next few centuries, all of the worlds spent fuel would fit into the space of one football field.

Rumyantsev had no comment on the possible location of said football field.

At the end of the press-conference, one person noted that the head of Rosatom catches the ball quite well. I dont have any idea what he was talking about, but I can say that Rumyantsev certainly knows how to parry concrete questions with vague answers.

For some reason  of course this is out-of-place  I couldnt help but remember the former head of the Ministry of Atomic Energy, Evgeny Adamov: he was another one that knew how to get away from difficult questions. So far, however, his skills have failed to help him get out from behind bars.