Rosatom: It is expedient to dismantle RTGs at Mayak

Radioisotope thermoelectric generators (RTGs), the bulk of which are used as power sources for lighthouses along Russias northern sea-coast, should be dismantled at the Mayak Chemical combine, says a proposal by Rosatom published on their official Web site (www.minatom.ru). 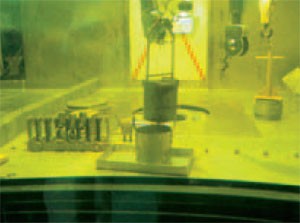 The Web site released this view in an article about a recent international seminar on RTG decommissioning held at the Kurchatov Institute.

The Soviet Union produced about 1 500 RTGs. The engineered life span of all of these generators, which have a highly active strontium-90 cores, has long ago been surpassed. But the continual incidents, involving RTGs,including the recent mishaps, when two generators were damaged falling from a helicopter on the Arctic Zemlya Bunge islandsuggest that the problem is not receiving attention it deserves.

Most RTGs are owned by the Russian Ministries of Defence and Transportation, while some belong to the Ministry of Natural Resources and Russian hydro-meteorological service.

Currently, RTGs are dismantled in Moscow at the Institute for Technical Physics and Automatisation, which developed and produced RTGs during Soviet times. After dismantling, the generator corewhich are the capsule-form radioactive heat sources containing strontium (RHS-90)are dumped at the Mayak combine in Chelyabinsk region.

Taking into consideration that the withdrawal rate of the RTGs is going to increase, an acute necessity emerged to find an additional or alternative variant for their dismantling. It looks like its Mayak which is expedient for RTGs dismantling, reads the statement from Russias Rosatom.

The participants of the seminar at the Kurchatov Institute representing Germany, Denmark, Canada, Norway, Russia, the United States, France and the NEFCO international organizationagreed to consider a variant to speed-up the decommissioning, which stipulates RTGs would be dismantled at Mayak at the rate 100 per year. It was also announced that the wish to participate in equipping this dismantlement point at Mayakcalled a hot chamberwas expressed by the German representatives.

According to Rosatom, in case the decision would be positive, the decommissioning of all Russias RTGs with dumping all the RHS-90s would be finished not in 2011, as it is planned, but two years ahead of the schedule.

Currently, Mayak is under an investigation by the Chelyabinsk regional prosecutors office, which launched a criminal case on radioactive contamination, defined by the article 246 of the Russian Criminal Code as aViolation of the environmental protection rules while carrying out operations. The investigation invited as witnesses representatives of non-governmental organizations, Nadezhda Kutepova, of Chelyabinks Planet of Hopes and Vladimir Slivyak of Ecodefense! in Moscow.

Meanwhile, in March, also on the Rosatom web-site, the deputy head of Rosatom, Sergey Antipov, claimed that a hot chamber is planned to be build with the assistance of the US Department of Energy at DalRAO, near the nuclear submarine base in Vilyuchinsk, Kamchatka. The goal was the same: To not send RTGs to Moscow and back. The dumping and vitrification was also planned to be carried out at Mayak.

Building of an interim storage facility for RTGs taken from different sites in Russia’s Far East has been already started at DalRAO with DOE funds.

And if a hot chamber built there, we are able to dismantle RTGs there, said Sergei Antipov, mentioning that with long-standing help from Norway, and new-found support from the United States, Russia has removed and decommissioned some 200 of about 920 RTGs.

Even earlier, in negotiations with American and German colleagues, Minatom mentioned a variant according to which the contents of RTGs would be stored in regional Radon dump-sites. For example, a plan is under discussion to build a long-term storage for RTGs in the Siberian region in a territory of one or several Radon facilities. But Radon combines are designed only for handling low-and medium-level radioactive waste, while RTGs pertain to high-level waste.

Most Russian RTGs are completely unprotected against potential thieves or intruders, and lack even minimal security measures like fences or even radioactive hazard signs. Nuclear inspectors visit these sites as seldom as once every six months, and some RTGs have not been checked for more than a decade.

The biggest danger coming from these unprotected RTGs is their availability to terrorists, who can use the radioactive materials contained in them to make so-called "dirty bombs" bombs that are triggered by standard explosives, but which disperse radioactivity. The damage from such an explosion could surpass by many times that from a conventional bomb, at the ground zero areapotentially dozens of kilometers depending on the power of the explosives dispersing the radiationwith remaining radioactively contaminating the area for years to come. 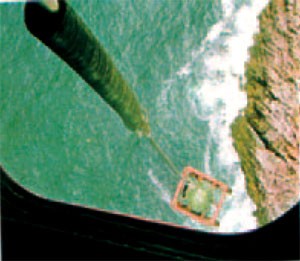 The most recent incident and international help
The most recent known RTG accident occurred when two RTGs were being dismantled on September 10th 2004, but no information was released about it until four months latereven though substantial gamma radiation was measured above the accident site. The two RTGsNos. 4 and 5 of the Efir-MA model produced in 1982were being transported from the New Siberia island lighthouse off the Northeastern arctic coast of Siberia.

They were suspended from a helicopter by cables for transport to the Russian polar station at Bunge. When the helicopter ran into heavy weather the crew was forced to jettison the two RTGs from a height of 50 meters on the tundra at Zemlya Bunge island, 112 kilometres from another Russian polar station, Sannikova. They have not yet been recovered.

According to information eventually released by Russias Federal Service for Energy, Technology and Atomic Oversight (FSETAN in its Russian abbreviation), the impact compromised the RTGs external radiation shielding. At a height of 10 metres above the impact site at Zemlya Bunge island, the intensity of gamma radiation was measured at 4 milliSieverts per hour.

Questions have been raised as to whether any of the newly-found US funding financed this misadventure. Bryan Wilkes, spokesman for the National Nuclear Security Administration for the DOEwhich manages the DOEs nuclear remediation effortssaid at the time in an interview with Bellona Web that he was unaware of the September mishap, adding that the DOE had tighter controls over how its money was spent and the criteria that govern that spending.

The question of how the funds of donor-countries geared toward helping Russia with the decommissioning of different nuclear objects, including RTGs, was discussed at the international seminar in the Kurchatov Institute.

It should be mentioned, the seminar was not so easy both in its format and in its course, commented Sergei Antipov on the Rosatom web-site.

Regretfully, such places, where donors dont see their participation and their help, exist. And there we are left to face the problem alone. But I hope that when we show the donors the full picture of RTGs condition, their position may begin to change, he added and proposed elaborating an RTGs decommissioning Mater Plan akin to the recently published master-plan on decommissioning of the nuclear submarines and several other objects in Northwest Russia.

Such a mater plan should stipulate all the priority measures, and what works are funded by each donor-country.

Earlier, at the RTGs decommissioning workshop in Oslo in February 2005, the Contact Expert Group (CEG) of the International Agency for Atomic Energy (IAEA), defined this problem thusly: "The workshop recognises the great importance of the exchange of information on a regular basis between all parties involved in order to eliminate duplication of efforts and overlaps."

Actually, the words "duplication and overlaps" coyly mean the lack of transparency in spending funds in Rosatom leading to the situation, wherein the same work is paid for twice, or even more from different sources.

The seminar at the Kurchatov institute also "proposed that in order to eliminate duplication and overlaps in the funding of the work on RTG decommissioning, to assign fields of activities to the donor countries (according to the geographical principle or to the fields of activities)."

It was also mentioned that none of the donors claimed the intention of carrying out and maintaining operations on RTG decommissioning in the Western and the Eastern parts of the Northern Shipping Route, as well as on the mainland, "so that these regions are still out of cooperation".

The lack of transparency in spending international support funds has often been criticized, including in a report by Russias Audit Chamber. The report, analyzing activities of Minatom (the ministry, which was transformed into Rosatom in 2004) in 2002, it was mentioned that the Western donors pay two times more for the same decommissioning operations Russia carries out.

Apart from financial abuses, the donors are anxious not to let the funds, given to Russia as aid, to be the cause of the new incidents.

In 2003 Norway allotted money for decommissioning of two of Victor-II class nuclear submarines. Almost simultaneously with signing of this contract, another rusted-out Russian submarine, the K-159, sank with 800 kilograms of uranium while being towed to a dismatlement point on the Kola Penisula , killing nine of the 10 crewmembers on-board. The fact that the Norwegian-funded decommissioning of submarines stipulated the same dangerous towing practicewhich Bellona brought to lightforced the Norwegian government reassess its policy toward Russian nuclear clean-up projects.