ST. PETERSBURG—Fourteen tonnes of titanium metal was stolen from laid up submarines at the Kola Peninsulas Sayda Bay—where approximately 50 irradiated hulls, some still loaded with spent nuclear fuel, bob and rust at dockside—by a well organized group that could have included local shipyard workers and even police, officials said Wednesday. 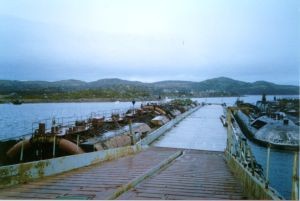 UPDATED May 12th: New information on how much titanium Sayda Bay is missing

This latest theft, said authorities is part of some 30 tonnes of titanium that has disappeared from bulkheads on decommossioned subs at Saida Bay over the past five years.

The most recent loss of 14 tonnes was discovered during internal checks of the derelict subs’s titanium bulkheads, said a representative of the Murmansk Regional Police in an interview with Bellona Web. Earlier checks of exterior buikheads, carried out in 2003, revealed that 17 tonnes of titanium was missing.

The police representative, who requested his name not be used, said it was impossible to say when the remaining 17 tonnes had gone missing, as submarine compartments have been kept at dockside for the last five years, making them more accessible.

The total financial loss in the valuable scrap metal and other damages incurred during the break in amount to 1.7m roubles about $55,000, a spokesman for the Murmansk Regional Police Department said in a Thursday telephone interview with Bellona Web. According to the spokesman, who asked not to be identified, the stolen titanium scrap should fetch between 50 and 70 roubles per kilogram, judging by local black market prices.

Alexander Golubev, who is investigating the case for the Murmansk Regional Prosecutors office’s Department of Speciail cases said, in faxed answers to questions sent to him by Bellona Web, that his office has opened two criminal cases in connection with the incident.

Most of the titanium was taken from the upper sections of submarine bulkheads, said Vladimir Panyov, head of safety at the nearby Nerpa shipyard, who is closely associated with the Sayda Bay case. He said in a telephone interview with Bellona Web that the buoyancy of the submarine hulls hit by the thieves was not affected.

He also said that the submarines selected by the thieves had already had their nuclear fuel removed and were located in what he called Sayda Bays safe zone where submarine hulls that have been unloaded of their nuclear fuel and are emitting radiation at acceptable norms are stored.

No radiation danger
We have no information that the stolen metal exceeded acceptable radiation norms. High radiation levels are just not possible in the safe zone. Our experts have made certain of this, said Panyov. There is also no danger that anything is going to sink. The stolen material came from the upper sections of the submarines bulkhead, which will have no effect on their buoyancy.

Golubev, in his responses, underscored that the stolen metal poses no radiation danger.

"The metal from the bulkheads absolutely had radiactive residue, even if only a little," he said in an interview with Bellona Web.

"The spend nuclear fuel was taken out, thank god, but the contaminated reactor compartments and other equipment remains."

He also took issue with the notion that the pilfered vessels were safe from sinking. He explained that the bulkheads are the "ribs of the firmness of a boat" which give the hull its strength. They also support the weiight of the hull’s interior, including the reactor compartment, which on a first generation sub weight some 800 tonnes and rise to 1100 tonnes on second generation subs.

At least half of this material, said Chernogorov, carries radioactive residue of some kind.

"Without bulkheads, the hulls resistance is destroyed and all this heavy filler material could end up on the bottom," he said.

‘Safe zone’
Until the massive theft, though, the safe zone was poorly guarded, Panyov said. Security consisted of fences and occasional patrols by Sayda Bay security staff—which unlike the so-called danger zone, is secured around the clock by several guard-posts and reinforced fencing.

Panyov said that the safe zone was now outfitted with its own guard post and that security measures were being taken to ensure that nothing like this is ever repeated.

Sayda Bay, which will receive EUR300m worth of repairs and safety upgrades funded by Germany that will eventually enclose the ailing and rusted out submarines under a roof-like facility. Energiewerke Nord GmbH, or EWN, the German contractor selected for the work will also be supplying special cranes so submarines can be de-fueled on land. Though EWN officials would not comment on the thefts, it is apparent that security upgrades what will come with the German project are all the more imperative.

Details of the theft and the search for suspects
The theft, which according to prosecutors occurred in early April, may have involved as many as four groups of professionally trained naval and law enforcement workers—from welders, to people to load the stolen metal, to a group to transport the material, to a group to unload the precious titanium metal on the black market, prosecutors were quoted as saying in the Murmansk edition of the Russian Komsomolskaya Pravda newspaper.

According to Golubev the thieves concentrated on the titanium bulkheads of the docked submarine hulls, he said in an interview with the paper.

Golubev said the suspects supposedly reached the submarines—which, as per usual practice, are stored in sawed-up sections that are held afloat by pontoons—in boats in which they brought portable welding material. He also alleged that the Sayda Bay guard units turned a blind eye to the crime in progress, the paper reported.

Nikolai Zaytsev, also of the Murmansk Regional Prosecutors office’s Department of Special cases told Interfax Russian news agency that one suspect, who had allegedly tried to purchase some of the stolen metal has been detained.

Golubev told Komsomolskaya Pravda that his office had managed to establish that no fewer than four groups were involved in the theft, each with specialized tasks, such as welding, loading the stolen material, transporting it, and selling to local scrap metal buyers for 50 to 55 roubles per kilogram.

Efforts to locate the suspects are therefore being concentrated in the nearby closed naval cities of Gadzhiyevo and Snezhnogorsk, Golubev told the paper. Golubev also said that several criminal cases have been opened in connection with the theft, and that two of the cases are investigating unspecified police officers in Gadzhiyevo.

This investigation will not be complete in a month, Golubev said, according to Komsomolskaya Pravda. Based on the information we have, we have to question an enormous number of people. Of paramount importance, he said was to understand whether these people were working alone, or if their work was organised by someone and concisely organised."

His colleague Zaytsev estimated that the investigation of the thefts would take some four months, Interfax reported.