Russia: a region of extremes

MOSCOW—A seminar late last month on the handling spent nuclear fuel, or SNF, and radioactive waste on the Kola Peninsula—home to Russias Northern Fleet and civilian nuclear-powered icebreaker base—produced equal measures of bureaucratic pomposity and surprise hints at much needed cash and help. 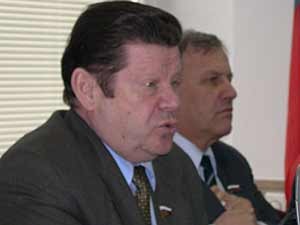 First to the help. According to British officials, the British contractors Crown Agents are currently in detailed discussions with the Murmansk Shipping company on establishing a project to build a Spent Nuclear Fuel Facility at the Atomflot site Murmansk which would be used to secure icebreaker fuel currently on the floating Lotta storage facility, a run-down service ship.

The United Kingdom, or UK Government has yet to see the detailed project proposal and give financial approval. If financial approval is eventually forthcoming it will be part of the UK’s contribution to the G8 Global Partnership initiative. The annual budget for this initiative is $51.3 annually. The Atomflot project was estimated at the Moscow seminar to be $19m. But the UK official said it would likely be closer to $12m.

Financial approval will particularly depend on their being appropriate physical protection build into the SNF facilility and satisfactory completion of Environmental Impact Analysis and other risk assessments, the official said.

Crown agents won a tender in 2000 to create casks and pads for waste from the Lotta, but funding delays meant the project did not begin until this year.

A formal announcement about the project will be made once all the necessary financial and risk assessments have been completed, the British official said.

The contractual leadershi from Crown Agents, should it come through, is a major step in alleviating radioactive threats from floating SNF storage facilities on the Kola Peninsula. The project may also draw greater attention to the Lepse, another Kola Peninsula based service vessel loaded with damaged spent nuclear fuel and which presents an even greater radioactive hazard.

Now for the bureaucrats and what they had to say—including a warm endorsement of the Soviet proliferation of nuclear weapons. Chairman of the Russian State Dumas Committee on the Environment Vladimir Grachev presided over the March 29th seminar.

Opening the meeting, Vladimir Grachev noted that the problem of radiation and nuclear safety in the whole was very pressing for Russia and for the whole world. Expanding military might, many countries, including Russia, adhered to the principle might is right, well see about the rest later.

Onward and upward. According to Grachev, western countries are simply obliged to fund Russian programmes to dispose of nuclear powered submarine and radioactive waste since it was, really, you know, the Wests fault that the former USSR and, later, Russia continued to arm itself to the teeth with nuclear weapons.

A great country asks for a great pile of waste
Russias nuclear might, as Grachev said, is the only factor that will preserve a great one sixth of the country. Such a great territory, said Grachev, needs to be used effectively: Russia, after all, is big enough to find a place to find space for radioactive waste disposal. What difference would contributing one sixth of its space to that purpose make?

Concerning the use of the one sixth of enormously huge Russia as a nuclear waste repository, Grachev mentioned that the environmental situation in this part of Russia is critical. The reason for environmental deterioration is that 114 nuclear powered submarines have been withdrawn from service. Naturally, the Grachev summed up, we have a backlog of problems that need to be solved. And this is a global task, a task for all neighboring countries.

Looking ahead, I would like to note that after the seminar I asked Grachev to give an interview to me for Environment and Rights the St.Petersburg, which I edit and is run by the environmental and human rights organization Bellona. Reluctantly, Vladimir Grachev agreed—I was insisting, I must admit.

I will tell all the truth about you, traitors, he said. You have various sordid gains and write what you are ordered to write. Grachev noted he regularly read Environment and Rights, and clearly was aware of who was ordering which articles to the detriment of our motherland. I immediately asked Grachev to order an article from me about him and asked him for money to fund the journal. Looking at me with disbelief, he called for his aide and said, Pencil in Pasko. When he calls, dont give him the brush-off. And with a proud look he headed toward a news camera crew.

I will tell the readers of Environment and Rights and Bellona Web about the interview and how it proceeded when the time comes. 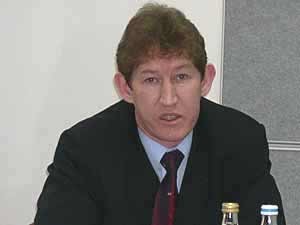 West will give money anyway
Among the major problems connected with radioactive waste disposal in Murmansk and the Kola Peninsula, Antipov also mentioned the problem of on-shore engineering bases. The overall radioactivity of accumulated waste at Andreyev Bay alone, he said, exceeds the activity of the Chernobyl nuclear power plants contamination after it exploded in 1986. Over the last three years, $60m has been annually allocated from the Russian state budget for an all-inclusive radioactive waste disposal programme. However, Russia is unable to deal with the problem alone, and, fortunately, the West is well aware of that. Of course, the West will be funding radioactive waste disposal—but only if the expenses can be justified.

According to Antipov, $4 billion is needed to resolve all the radioactive waste problems in the Kola peninsula region over a ten-year period, to which Grachev responded: So we have got some work to do.

Germany has already allocated part of the EUR300m it promised in October. Great Britain and Italy have also offered help. Antipov stressed that Norway regularly decent good money— without fuss and muss, as former Commander of the Northern Fleet Vyacheslav Popov put it.
He did, however, note that this money is allocated against a complicated background of internecine government quarrels in Norway, where some political parties are demanding stricter relations with Russia.

Speaking about SNF handling at prospective on-shore facilities, Antipov underlined that such facilities were impossible without special robotic technologies to handle the highly active SNF.

Analysis has shown that the transportation of the entire volume of SNF on the Kola Peninsula to Mayak is impossible for many reasons. As an alternative, the construction of a long-term storage facility in the Murmansk Region has been offered. (One ministers ambiguous statements draw one to the conclusion that such a storage facility will turn out to be not only long-term, but a final disposal facility, or geologic repository. In either case, we shall hardly live to see this problem solved completely.)

The Lepse, the Lotta… and elsewhere
Oleg Bogorodsky of the Murmansk Shipping Company described the situation at radioactively hazardous sites in the Murmansk Region. He noted that more than 70 ships requiring nuclear technological maintenance are concentrated in Russias Northwest. Most of them have past their engineering lifespans and are in unsatisfactory technical condition. SNF and radioactive waste have been accommodated in such ships. But the designs of these ships, he notes, do not provide for proper shielding against radiation leaks. An accident aboard such a ship in the Kola Bay could lead to an ecological catastrophe in the Kola Peninsula area, with grave radiological consequences for the entire population. The residents of neighboring Scandinavian countries might also be affected as a result of a trans-border spread of radionuclides.

Bogorodsky also said that Russias former had been Minatom commissioned to devise the Concept of Nuclear Power Submarine Dismantling. According to this document, separate concepts of the dismantlement of nuclear powered surface ships need to be developed. An integrated solution to this problem should also allow for dismantling atomic ice-breakers and further handling and storage of irradiated compartments of decommissioned ice-breakers. The government plans to decommission nuclear ice-breakers that have exceeded their engineering lifespan beginning in 2008.

Bogorodsky said that SNF was currently handled and transported to the Mayak Combine for further reprocessing according to a special transportation and technological scheme that involves SNF storage and handing by the Lotta and Imandra enterprises, and the Murmansk Shipping Company. Atomflot, where the civilian nuclear powered ice-breaker fleet is based, puts the SNF aboard Mayak-bound trains. Atomflot is one of two enterprises in Russias Northwest from which SNF is shipped and where submarines are decommissioned.

The floating Lotta base is the only location in Northwest Russia capable of putting SNF in transportation packaging. Thee Northern Fleets ships and on-shore bases are not so equipped. The Lottas engineered lifespan expires in 2006, and then its SNF will have to be taken from the ships storage facility. As a result it will be necessary to create a new on-shore complex at Atomflot allowing for the temporary storage of SNF in containers, as well as a facility capable of packaging regular SNF shipments to Mayak for reprocessing. To resolve this problem, Atomflot and the British company Crown Agents—on the initiative and participation of the Murmansk Shipping Company—are in the process of concluding an agreement to modernise Atomflot’s on-shore SNF storage facility and upgrade it with necessary infrastructure such as casks and pads for SNF storage and transportation, seminar participants and UK officials said. The project is estimated at $19m if it receives UK approval. The unloading the Lottas entire volume of SNF alone will require approximately 70 containers at a cost of $17.5m alone.

At the seminar a documentary film by Murmansk journalist Sergey Filippov about the intense radioactive hazards of the Lepse was shown. Filippov, who also works at Bellonas Murmansk office, told the participants about the documentarys filiming and thanked Bellonas Oslo office office for its assistance in completing the project.