Two Strontium containing Radioisotope Thermoelectric Generators, or RTGs, used to power navigation beacons and lighthouses were found literally ripped to pieces by unknown vandals during regular checks by the Russian Navy’s Northern Fleet in the area of the Kola Peninsula last week.

The damage was so severe that Murmansk Regional officials designated the incident as a "radioactive accident."

It is assumed by local authorities that the vandals were scavenging for valuable metals, including stainless steel, lead and aluminium, all of which could easily be dumped on the scrap metal market in Murmansk. But the vandals also took with them the depleted uranium casing, which is used to protect the RTG’s strontium-90 cores.

The strontium-90 cores—which have a half life of 26.5 years— were left at the sites of the navigation devices. They are highly radioactive—emitting some 1000 roentgens per hour—and local police officials and officials from the Murmansk Regional Federal Security Service, or FSB, said in interviews with Bellona Web that the suspects could well be dead or seriously ill. They have therefore expanded their search for the suspects to include not only the areas from where the RTG’s were stolen, but to Murmansk area hospitals as well. They are also combing local metal scrap yards, a Murmansk FSB official said in a telephone interview.

The day after the incident was revealed, Deputy Minister of Atomic Energy Sergei Antipov told Bellona Web in an interview in Murmansk that Russias Ministry of Atomic Energy, or Minatom, is actively looking into substitutes for the strontium-90 batteries. One option, he said, was other nuclear sources. But he also said Moscow was considering solar power arrays for the navigation devices that were developed by Norway,

He noted however that Norwegian solar array designs were not sufficient for Russias purposes and that Russia would have to design its own.

That the generators, known as RTGs, could so easily be reached and torn down literally to their radioactive cores is disturbing news for both the environmental and nuclear security communities.

Both groups have warned Russian officials about potential disasters that could occur should terrorists get their hands on any of Russia’s aged 1000 RTGs—many of which have not been checked in years, and many of whose locations, by admission of Russian Ministry of Defence, are unknown. In Northwest Russia alone, there are some 150 of these strontium generators. All 1000 of these generators have exceeded their engineering life span, in some cases, by as much as a decade, according to a source in the Defence Ministry who spoke with Bellona Web on the condition of anonymity.

In the wake of the discovery, the Murmansk Region Administration today issued a statement indicating that on November 12th, the Hydrographic Department of the Northern Fleet—while conducting a regular inspection of the lighthouses—discovered a completely dismantled Beta-M type No. 255 RTG, which was used to power the navigation lighthouse No. 414.1 in Olenya bay in the Kola harbour.

The statement indicated that the RTG had been completely dismantled, down to the depleted uranium protection vessel. One radioisotope heat source was found near shore in water 1.5 to 3 meters deep.

The next day, according to the Murmansk Administration statement release Monday, yet another Beta-M type No. 256 type RTG, which powered lighthouse No. 437 on Yuzhny Goryachinksy island in the Kola harbour was found in precisely the same condition—all of it’s valuable metals had likewise been stripped, including the depleted uranium, and a radioisotope heat source was found on shore on the northern part of the island. 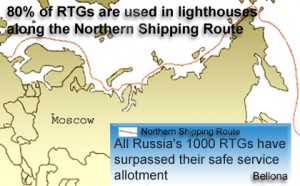 No overview or control of RTGs
The destroyed RTGs are the responsibility of the Russian Ministry of Defence, which carried out periodic checks on the units—that are still locatable—once or twice a year. Many RTGs in the Arctic north of Siberia and the coast of the rough Russian Far East have, according to sources at Minatom, literally been lost, or "orphaned."

According to Murmansk Regional Administration radiological officials interviewed by Bellona Web, this is the second such incident in the region. The previous case occurred in 2002 near Kandalaksha. In that case, three RTGs were vandalized. Local radiological officials believe the thieves mostly look for non-ferrous metals, which RTGs contain in large quantities in their layers.

Further afield, a similar incident occured in the Leningrad Region in March of 2003 when a Beta-M RTG was vandalised. The Navy carried out a control inspection of this RTG in June of 2002—almost a whole year before the accident was discovered. And in 2002, three hunters in the former Soviet republic of Georgia were severely irradiated after stumbling across an RTG that had been in the woods for years. Huddling around the strontium battery as a heat source, all three received high radiation doses and spent months in the hospital battling radiation sickness.

It is Bellona’s position that the Russian Federation must provide stricter controls over its RTGs and carry out an immediate inventory on all currently operating RTGs. In addition to the health risks these radiation sources—found in isolated areas with little to no warning about their presence—pose, RTGs represent an obvious non-proliferation threat. Their strontium components can easily be fashioned by terrorists into a so-called "dirty bomb," which is a conventional bomb stuffed full of radioactive materials. Fear of such radiological dispersal devices has grown the world over after the attacks of September 11th 2001.

RTGs
There are approximately 1000 RTGs in Russia. Most of them are used as a power source for lighthouses. RTGs are operated by the Defence Ministry, the Ministry of Transport and Russian Hydro-Meteorological Service. The Ministry of transport runs more than 380 RTGs, whereas the Ministry of Defence operates 535, including more than 100 located on the Kola Peninsula. Most of the RTGs, which fall under the auspices of the Defence Ministry, are located along the Arctic coast, or the so-called Northern Sea Route.

Since 1960, nine different models of RTGs have been developed. The Beta-M type RTG is most commonly use and there are around 700 of them in operation across the Russian Federation.

Beta-M type RTGs put out 230 Watts of power. The weight of a standard RTG is 560 kilograms altogether, and the weight of the radioactive portion is around 5 kilograms. This active portion contains 35,000 to 40,000 Ci of activity. The radioactivity of an RTG at the distance of 0.02 to 0.5 meters is 800 to 1000 roentgens per hour. These radioactive sources can reach temperatures of up to 500 degrees Celsius.