Minatom and Environmentalists Square Off on Ministry Steps Over SNF Imports

Some fifty environmentalists Thursday swarmed the rainy sidewalks in front of the Ministry of Atomic Energy, or Minatom, and went head to head with the bureaucrats inside — at least from shouting distance — to once again draw attention to the dangers associated with Russia’s policy of importing radioactive waste.

Published on November 22, 2002 by Charles Digges 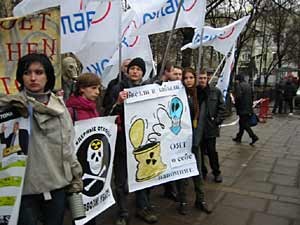 The hour-long protest — which resulted in no arrests, despite a heavy police presence and the several Minatom security personnel dispersed among the crowd — was arranged by Green Yabloko, an offshoot of the consistently anti-Kremlin, pro-environmental Duma faction led by Grigory Yavlinsky — and the Moscow anti-nuclear group Ecodefense!.


Featured on the sidewalk in front of the ministry were activists dressed in gas masks and death-shrouds, holding banners that read “Say No to Nuclear Imports.” Another banner featured a mock-up of the periodic table that replaced the entries for radioactive elements with dollar signs — a lampoon of Minatom’s scheme to import nuclear waste and charge for its storage and eventual reprocessing, a plan ministry head Alexander Rumyantsev said will net Russia $20 billion over ten years. Also visible from the windows of the bureaucracy were dozens of Yabloko party flags.


From the sidewalk, protestors hectored Minatom employees through bullhorns with chants of “Down with nuclear imports” and “Nuclear money in social hands,” and distributed literature to passers-by.


“The Ministry of Atomic Energy thinks it has won this war [to import radioactive waste], but it is mistaken — all it has won is a tactical battle. The war is ahead,” said Vladimir Yashin, of Yabloko’s youth movement, to the crowd.


“Today we demand that any money made on nuclear imports be put under strict, independent, social control,” Yashin said to a cheering audience and the camera and microphones of Russia’s remaining independent television and radio stations. A statement released by the Moscow Yabloko offices prior to the demonstration alleged — in contrast to Minatom’s earlier pronouncements about publicizing the kind of funding it was drawing from the import plan — that “information about what the federal budget is getting [from imports] is a state secret.” 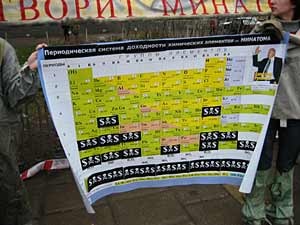 With some 90 percent of the world’s spent nuclear fuel (SNF) controlled by the United States, however, it is no secret that Minatom is having trouble signing contracts with all but former Soviet Bloc states, and has sent several delegations to Washington, hat in hand, to request rights to at least some of that fuel.


The occasion for Thursday’s demonstration was the four-year anniversary of the first arrests made against protestors of Russia’s imports of radioactive waste, when two members of Yabloko party were detained in front of Minatom’s monolithic Stalin-era offices on Bolshaya Ordynka street for picketing SNF imports from the Soviet-built Kozlodui nuclear power plant in Bulgaria.


The activists have long since been freed, but the Kozlodui imports remain an especially thorny issue with environmentalists and government authorities alike. The Bulgarian plant, like many others in the former Eastern Bloc, has been shipping its SNF back to Russia for some 20 years — many years prior to the passage of last year’s laws legalizing radioactive imports — because it ran on Soviet, now Russian, fuel, which means that what happens to the fuel after it is burned in Bulgaria is Russia’ prerogative. In the majority of cases, that means Russia takes the fuel back for storage and future reprocessing.


But since 1998, SNF returns by the Kozlodui plant have been characterized by shoddy waste packaging, one barely averted and potentially catastrophic railroad accident, and a financial scandal when, in 2001, the Cyprus-based Energy Invest and Trade Corporation, through which Bulgaria’s waste removal payment was to be transferred to Russia, was discovered not to exist.


In the fallout of that scandal, government sources said that President Vladimir Putin was so enraged he fired Deputy Atomic Minister Valentin Ivanov and top officials at Tekhsnabexport, or Tenex — Russia’s international fuel broker. 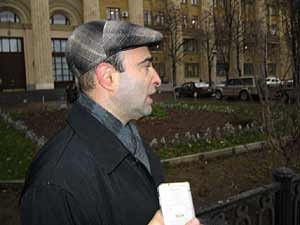 “The arguments I am hearing are absolutely unfounded,” said Nikolai Shingarev, Minatom’s chief of information policy, who put in an appearance at the demonstration.


Shingarev, however, said that nothing untoward had been found in that 2001 shipment, which amounted to a flat contradiction of Dmitriev. Furthermore, Shingarev asserted that payments for the 2001 SNF shipment from Bulgaria were made to Russia in three instalments through a British bank “that didn’t involve any offshore transactions.”


He would not specify the amount received for the shipment, and offered no further evidence of the involvement of the British bank, but he said that 20 percent of the proceeds from Bulgaria’s check had gone to ecological improvements. Last year’s laws allowing radioactive imports stipulated that “up to 39 percent” of the profits would be put toward ecological improvements — meaning the Bulgarian fee contributed almost half of the sum allowable for environmental clean-up.


A year after the legislation’s passage, however, Russia has yet to sign any major import contracts. The recent refusals of the formerly cooperative Moldova and Romania to allow transportation of Bulgarian spent fuel through their territories to Russia have doubtless added insult to injury for Minatom’s import plans. 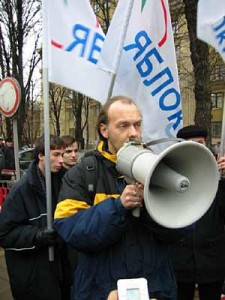 Environmentalists, however, are enjoying the laurels of their success.


According to Ecodefense! co-chairman Vladimir Slivyak, sustained pressure from environmental groups in these countries hobbled the Russian-Bulgarian deal so severely that only three shipments from Kozlodui have been made to Russia in the past four years.


“This attests to our huge success and I think it is worth noting this as an anniversary and a time to congratulate one another,” he told the demonstrators.


Late this summer, Minatom officials negotiated SNF transportation contracts from Kozlodui with Ukraine, and Kozlodui officials predicted the first shipments would be leaving by the beginning of November. What makes this latest deal especially unpalatable to the environmental community is the suspicion — which was confirmed to Bellona Web by a member of the Bulgarian government — that Bulgaria is simply trying to get rid of as much radioactive waste as possible before joining the European Union.


When that happens, at an unspecified date in the future, European Commission regulations will prevent Bulgaria from sending toxic waste abroad to countries that are considered not to have adequate facilities to deal with this waste. Though the EC has no stated policy on SNF exports to Russia, EC officials generally agree that Russia is unequal to the task of safely storing, reprocessing or disposing of spent nuclear waste.


Slivyak, while cautioning that some storage capacity was available at Zheleznogorsk, added that the fuel would sit for some 30 years before it is ever reprocessed or interned permanently. As for Mayak, a southern Urals reprocessing facility and the prime candidate for handling foreign SNF, Slivyak said, “they don’t have a kopek to modernize or reconstruct their storage and reprocessing equipment.”


“The equipment they are using is more than 30 years old, so taking more fuel from abroad is just crazy.”