Russia’s Atomic Energy Ministry says it’s discussing a deal with the United States in which the Kremlin’s cessation of nuclear assistance to Iran’s controversial Bushehr reactor project would mean imports to Russia of US origin spent nuclear fuel (SNF), a deal the ministry, or Minatom, has been courting for more than a year, a Minatom spokesman and a prominent nuclear industry magazine reported. 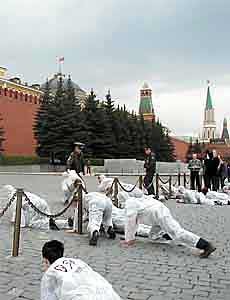 The report was immediately dismissed by US embassy officials in Moscow, who said they had heard nothing about the supposed deal. These officials further expressed their reservations about Russia’s SNF import program as a whole, characterizing it as a proliferation risk.


But according to the article, published September 30th in Nuclear Fuel — as cited on the website of the US based and privately funded Nuclear Threat Initiative, or NTI — the United States is planning to offer Moscow a series of import contracts on US controlled SNF if Minatom agrees withdraw from its $800 million 1000 megawatt reactor project in Bushehr Iran.


If true, the United States — which controls an estimated 90 percent of the world’s nuclear fuel — seems to be hoping that Minatom will view long term SNF import programmes involving US controlled fuel as more profitable than short term contracting jobs in countries that US President George Bush has characterized as part of the “axis of evil.”


Under former President Bill Clinton, the United States “never understood that unless Minatom is offered an alternative way to make money” it would not stop doing business with Iran, a Russian diplomatic source was quoted as saying by Global Security Newswire, or GSN, which publishes on NTI’s website.


Minatom spokesman Yury Bespalko confirmed to Bellona Web Tuesday that talks on the SNF for Bushehr swap were taking place.


“Yes there are discussion about such a deal underway between Minatom and the United States, but they are taking place among ‘mid-level’ managers — this has not reached discussion among the highest authorities on either side,” he said in a telephone interview Tuesday.


“At present, we are still pursuing our cooperation with Iran,” he said.


But the US Embassy in Moscow poured cold water on the deal outlined by Nuclear Fuel and said that the US position about the Iranian reactor had not changed.


“We have no knowledge of such a deal and repeat that the Bushehr reactor programme should be shut down without any deals at all,” an embassy spokesman said.


“We also view the import of spent nuclear fuel [to Russia] as a proliferation problem that has not been addressed.”


However, GSN further reported that Russian diplomats have recently said the possibility of receiving and reprocessing spent fuel and supplying mixed-oxide — or MOX — fuel to foreign customers has Moscow talking to Washington again after the chill cast on their relations by the by the dispute over the Iranian reactor.


But, Minatom — and particularly Atomic Minister Aleksander Rumyantsev — has been actively pursing Washington for import rights to US consent fuel. Without import rights to at least of this US controlled fuel, Minatom has scant hopes of becoming a major competitor on the SNF storage and reprocessing market, which is controlled mostly by England and France


Aside from the report in Nuclear Fuel, Minatom’s import wish was recently given a small endorsement by Russell Dyer of the US Energy Department (DOE), who said in an interview with Nuclear.ru at last month’s irradiated fuel conference in Moscow, that small quantities of US controlled SNF may soon be shipped to Russia.


But the financial and quantitative parameters of the apparent SNF-for Bushehr deal, as recapped from Nuclear Fuel by GSN, are foggy.


It is unclear, for instance, whether Minatom would be allowed to start seeking contracts in any country holding US consent fuel, or if the United States would control which countries where allowed to import.


Furthermore, if spent fuel is to be imported for the production of MOX that will be sold to foreign customers, it is currently unclear — as Bellona reported in August — whether MOX fabrication will take place, if it ever does, at Zheleznogorsk, as had been previously envisioned in DOE plutonium disposition plans, or at Mayak, a site so contaminated that industrial level production of the fuel would be beyond devastating.


Russia’s modest debut on the SNF market was made possible last year when a dubious package of legislation was rifled through the State Duma by then Minatom chief Evgeny Adamov, who promised Russia would reap $20 billion over the next 20 years in storage and reprocessing fees.


The legislation package, which became three laws, was hugely unpopular and environmentalists around the country collected 2.5 million signatures — more than the required 2 million in 60 regions of the Russian Federation. The referendum was scuttled by the Central Election Commission, however, which disqualified some 600,000 signatures for minor technical reasons, some as insignificant incorrect street abbreviations.


Suffice to say that what is limiting Russia’s aspirations to becoming an SNF storage and reprocessing magnate is not the opposition of nearly 90 percent of the Russian public — according to a recent poll commissioned by Minatom — but the mammoth US control has over spent fuel, which has restricted Russia’s client base to former Soviet fuel customers like Bulgaria and Ukraine — a drop in the bucket compared to reprocessing giants like France and Britain.

Should Minatom overcome US security reservations and Russian environmental opposition, Russia’s new clients, according to Nuclear Fuel, as citied by GSN, could include western European countries, as well as Japan, South Korea and Taiwan, the last three of which buy US made fuel, though lack the resources for building their own geologic repositories for spent fuel storage.