Standing in the heat, swatting at mosquitoes and answering sometimes hostile questions at a tent city pitched by environmentalists at the side of the road that leads to the closed nuclear city of Zheleznogorsk is probably not how Eduard Zavdugayev wants to be spending his afternoon. 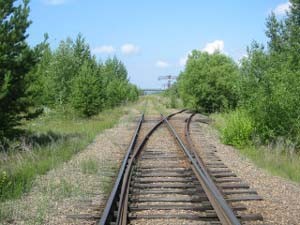 Just 15 kilometres up that road is his office in that city, which is shown on few maps, and he is probably missing the air-conditioners administration officials get this time of year when the summer sun burns into the flat Siberian plains.

Zavdugayev is the chief public affairs officer for the administration of Zheleznogorsk — also known as Krasnoyarsk-26 — which houses one of Russia’s three remaining plutonium burning reactors and an estimated 3,000 tonnes of high level spent nuclear fuel (SNF) in its RT-2 facility. His administration is angling for the import of even more foreign and domestic SNF to the region to fill a proposed 20-tonne capacity nuclear waste storage repository to be built in the region.

This combination of activities and plans has made the Zheleznogorsk State Chemical Combine (GKhK) a lighting rod for fierce arguments between the state and environmentalists about not only the import of SNF, but its possible internment within the Krasnoyarsk region.

The SNF imports championed by the combine also called into question principles of democracy on July 1, when the Krasnoyarsk Regional Court upheld the scrapping of a locally generated signature drive that would have forced the issue of accepting foreign SNF in the Krasnoyarsk area to a regional referendum. The court kicked the question back to Moscow, saying the handling of SNF was a federal decision.

Irreconcilable differences
As such, Zavdugayev — as an advocate of foreign SNF imports and the proposed SNF internment facility — was not making many friends at the camp when he was invited earlier this month for a dialogue with the environmentalists.

"This to me is not an environmental protest," he confided to Bellona Web about the camp.

Casting a jaded look at the protest banners and cars on the highway that honked their support of the camp, Zavdugayev said the gathering was "an opportunity for a bunch of young kids to come out to the woods, rest a little, have some fun. And none of them has a clue as to what we do down the road at Zheleznogorsk — and I bet not one in ten of them could explain what SNF is."

"They all think life in Zheleznogorsk is horrible, that the city is glowing with radioactivity, but it is some of the best living you can know in Russia," he added. "There’s no crime, you can walk the streets at night, there is a supply of food in the stores unmatched by what you can get in these surrounding villages."

Indeed, many gathered at the camp would have loved to get a closer look at what happens in Zheleznogorsk, but entrance permits for Russians who don’t live there take several days to process, and permits for foreigners take a month and a half. Bellona Web, at the invitation of Zavdugayev, plans to file the necessary paperwork for a legal visit.

Even so, the trips are strictly ushered affairs, say journalists and activists who have gone on them, which show the brighter face of the city that houses a plutonium reactor, is begging Moscow for more waste, and is one of the biggest radioactive polluters in Russia, contaminating Siberia’s Yenisey River.

Nevertheless, Zavdugayev repeated an oft-cited dictum regarding Russia’s closed nuclear cities, the pass regimens and barbed wire that keep out undesirables, the adequate funding base from Moscow, and the high military presence that lead to cleaner, safer streets and well-stocked stores is a fair exchange for living on top of a potential Hiroshima.

Health in the closed city 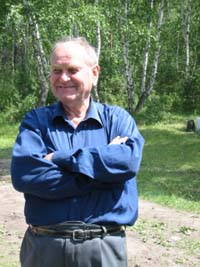 Similarly unattended are the railroad tracks that bear trains full of SNF into the territory of the closed city. Bellona Web observed only one checkpoint located a few kilometers from where the restricted area actually began, and it was easy enough to walk along the tracks beyond the restricted area as hikers and flower pickers and approach the sentry box, from where guards control the gate.

The gate — as rickety as the unmanned guard tower 100 meters behind it — could be seen to hang about a half meter’s distance from the ground giving a person ample room to roll under. The sentry box itself was empty when Bellona Web arrived and only after several shouts did the gatekeeper — an old woman obviously of pension age — appear.

She would not let the group of activists pass through her gates, though she happily offered to guide them to areas closer to the restricted nuclear zone — but not officially on its grounds — reachable through holes in the fence, where more verdant flower fields could be found. The group chose against exploring that option.

"These tracks are one of my main concerns," said Spirin. "Anyone dressed up as a mushroom hunter can get close to them. My fear, naturally, is that terrorists will blow up the rails and cause a spill of highly radioactive SNF."

For now, though, there are relatively few people Spirin can share his fears with, besides groups of like-minded activists who occasionally drift in his remote direction.

"The authorities are not going to pay attention until something awful happens, and even then, their reaction will be flaccid," he said. "Let whoever in and out of the city through these fence holes as long as the administration can keep the notion of peace and security and block outsiders from interfering with their plans, even if it means pressuring the residents of Sosnovoborsk into silence."