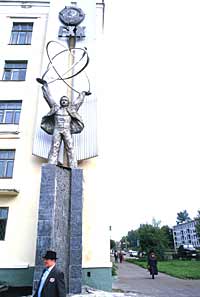 As he pulls the garments off a special hangar, the smell of sweat and dirt waft into the room. Measuring todays guests with the eye of a tailor, he selects a burlap, sweat stained workers jacket for one, a soiled had and a set of coveralls that smell like they may be stained by some sort of animal feces — he doesnt know — for a second, and another tattered, fetid uniform-type jacket for a third. This third also gets a pair of mud-strained work boots to replace her distinctly western sandals.

Now you look like locals, says the 38-year-old Spirin, obviously pleased with the transformation. It is not that his fashion sense is skewed, but rather that he is an expert in local camouflage, so that the occasional groups of environmentalists and reporters that visit from Moscow and the west blend in as they look around his town, which has essentially been drained dry by its neighbour, the closed nuclear city of Zheleznogorsk, or Krasnoyarsk-26.

Federal money, when it comes to the remote region some 35 kilometers from Krasnoyarsk, is earmarked for buttressing the programmes at Zheleznogorsk, which is home to one of Russias last three plutonium reactors. The closed city also holds 3,000 tonnes of spent nuclear fuel (SNF) at its RT-2 facility.

The reactor is scheduled — by a US Department of Energy plan — to be shut down by 2005 or 2006, and an aged fossil fuel plant refurbished to take on the burden of heating the region. But even then, the reactor itself will have to stand for 50 years while levels of radioactivity subside to levels making its dismantlement possible.

Meanwhile, the Russian government, and many in the Krasnoyarsk and Zheleznogorsk administration are lobbying to have an underground internment facility built in the region to store a minimum of 20 tonnes foreign and domestic SNF — a proposal that has met with widespread, though largely ignored, protest locally.

In Sosnovoborsk — a collection of ramshackle barracks-style buildings initially erected for the workers that constructed Zheleznogorsk — area doctors, speaking on the condition of anonymity — say they are treating high levels of cancer related to radiation sickness in middle aged patients, though no official statistics were available.

Many patients are former workers at the Zheleznogorsk Chemical Combine, but there are other, said one doctor. More disturbing and isolated cases are people who have nothing to do with the combine are getting ill — it suggest contamination that townspeople dont know about.

The factory or the devil
This is precisely this sort of hidden knowledge that Spirin wants brought out in the open. But to bring the message to the people, he has not been speaking from podiums, or lobbying the government — that would require, at the very least, a tie, something, by his own admission, that he doesnt own. His chosen method is a sort of word-of-mouth grassroots agitation.

Unlike his colleagues in the West, he has no banners to unfurl, t-shirts to sell or pamphlets to pass out — the printing costs are too high. But what he can tell you off the top of his head wont be found in such detail in a leaflet. If you want a view of the monolithic closed nuclear structure that is destroying his region, he wont show you photos. Instead, hell dress you up like a mushroom picker and take you to the legal edge of closed citys perimeter.

His means, to say the least, are modest — he is no mini-Greenpeace. But he has an ardent passion that the people of his area have to know whats going on. So equipped with oratory and years of self-study of the region, he tells them.

Theres a saying, you might not concern yourself with politics, but sometime, politics will concern itself with you, said Spirin in an interview with Bellona Web.

Its the same with ecology around here — you may not deal with it yourself, but one of these days its going to deal with you.

As a whole, Spirin says, the town has an inkling of what it is up against ecologically but as long as the environmental corrosion continues in relative silence, people are inclined look the other direction.

When nothing is wrong, ecology is the 35th item on your list, he said. Youve got other problems — with work, with feeding your family, with school — but when the food is bad, when your kids are getting sick, when the territory in which you grew up is polluted, and its no longer your territory but the factorys — or the devils — thats when ecology deals with you.

An unlikely activist
A glance at Spirins resume shows he is no born environmentalist. Throughout his adult life he has done mostly odd jobs like loading trucks, working as an electrician and a plumber. But he does have what could be called upper level experience in the human rights field — which came about serendipitously — and it was among this working-class milieu that Spirin found his most abiding allies.

Another electrician friend of mine and I decided to open a local chapter of Amnesty International out here in Sosnovoborsk, Spirin said.  We were among the first two registered groups in Russia, the other at the time being in St Petersburg.

But, as Spirin recounts it, the St Petersburg group ran into registration problems meaning the Sosnovoborsk group briefly became the primary group in Russia, and he was told while doing a pick-up job loading a truck that he was the chief of the all-Russia delegation for Amnesty International.

For about two days, my colleagues and I were the big bosses for Amnesty International, he said.

Youve got to understand, throughout my working career I have been pretty much working class, and here we are, all of a sudden, my friends and I, who are out their rewiring flat-blocks, unloading trucks, unclogging stopped up toilets, are running Russias Amnesty International at the same time.

Ecology deals with Spirin
Eventually, St Petersburg dealt with its red tape and the locus of power shifted back. But Spirins taste for helping his local community did not. This taste eventually found an outlet in the local newspaper, in 1997 where he began putting together two pages weekly for children under the rubric Ochkariki — meaning literally children who wear glasses, but bearing the connotation in Russia of young scientists, or curious students.

Part of the page was devoted to answering questions from young readers, which became more and more ecologically advanced. The kids werent dumb, said Spirin, and they were less inhibited than their parents about asking about out local ecology, what was going on at Zheleznogorsk, what SNF was, how close SNF trains came to Sosnovoborsk — they understood it was affecting their lives.

The pages quickly became a hit and Spirin began to make numerous environmental contacts. The second version of Ochkariki was published as a free-standing journal, basically run off on a copy machine someone had access to, but nonetheless all the copies were picked up a devoured.

A third, more professionally designed edition stands ready on a computer owned by Spirins friend, another electrician, but Spirin has run into prohibitive printing costs, as well as local Mafiosi who want a cut of the proceeds of the magazine Spirin was planning on distributing for free.

Nonetheless, Spirin expects it to see the light of day somehow, even if he has to print and distribute it himself. .

I dont work as a professional in this — I receive no salary — but I have this theory that you have to do it all yourself, and for yourself, for your own people. And nourish them in the process.

Administrative Attention
Nevertheless, this process of nourishment entails no small risk of harassment by local police and the Federal Security Service, all of whom would rather he keep his mouth shut about the dangers looming down the road. His own co-environmentalist, Panina, lost her job for her actives and her son has been brutally treated by local police.

Spirin, nonetheless, jauntily responds he has no job to take away.

Im unemployed, have no money, and they know I would fight them in court for my right [to disseminate ecological information] for the next few decades, he said. I am too stubborn to stop and they seem to understand this.

Activisms Several hats
AS a result, the city administration, which — unlike the security services — has an ambivalent, if abiding, interest in find out what Spirin has to say, is on the brink of putting him on the payroll in an advisory position.

According Vladimir Slivyak, co-chairman of Ecodefense!, which has been lobbying the Sosnovoborsk administration to help Spirin create a local environmental information centre, a recent meeting between Slivyak, Spirin and Sosnovoborsk officials yielded encouraging results.

According to Slivyak, Spirin will likely be furnished with one room, a small salary and a job title — his first in years — through the Sosnovoborsk Administrations Department of Cultural affairs for the creation of the centre.

At present, the city is willing to go as far as giving Spirin the room, and many of the basic materials that Spirin would need will have to be donated by Ecodefense! and other organizations. So far, one individual has committed to giving Spirins center a computer. But the computer needs a modem, and Spirin by his own admission needs training.

Unlike classical western conceptions of grassroots activity, Slivyak said that activists in Russia have to be able to coordinate community information meetings, climb smoke stacks to hang banners, and then dust off, change clothes and go lobby the authorities.

The lobbying that gets done in the West is really what Russia is lacking in, said Slivyak in a recent interview. There, youve got people on the street, but also people in offices talking to politicians who make the decisions — here I have to do both things, coordinate actions, and then go talk to officials at the Nuclear Power Ministry.

Spirin, though, seemed unfazed by the new hats he will have to wear should the deal for the environmental information centre come through.

I have wanted to engage the officials in this seriously for years, and this shows they are willing to take it seriously too, he said. Though, I suppose Ill have to buy a tie.