In Eastern Siberia, three reactors continue to churn out weapons grade plutonium at the rate of 1,500 kilograms a year. The conversion of these reactors, which until recently had been the responsibility of the decade old, Pentagon-run Cooperative Threat Reduction act (CTR), have come no closer over the past decade to reaching fruition. 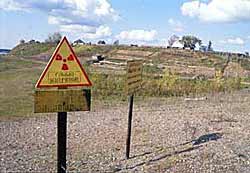 Meanwhile, the spent nuclear fuel (SNF) from these reactors continues to be shipped to local radiochemical plants, where it is reprocessed for weapons grade plutonium. These three reactors — one in Zheleznogorsk (Krasnoyarsk-26) and two at Seversk (Tomsk-7) — are imperative, insist local plant directors, to maintaining heat and electricity through the winter, regardless of the plutonium they produce.


Enter the US Department of Energy (DOE) — to which this program has been transferred — with a $49.3 million budget to not refurbish, but shut down these reactors altogether and build or refurbish fossil fuel plants to meet local energy needs, which the plutonium producing reactor have been supplying.


The DOE may also get another $75 million in unspent Pentagon, or Department of Defence (DOD), funds that remained in DOD coffers when the program was transferred.


The reshuffled programme will also reduce the non-proliferation risks associated with the waste from the three reactors, which creates another 1,500 kilograms of weapons-grade plutonium a year — adding to Russia’s unofficially estimated 125 tonnes. Official calculations for an exact figure are underway at Physics Energy Institute in Obninsk, but the preliminary results are still classified. The US, by comparison, has produced about 100 tonnes of weapons-grade plutonium beginning from 1945. The plutonium produced at the Seversk and Zheleznogorsk reactors is currently stored on-site.


According to a report on the Bush Administrations non-proliferation budget requests released in April by the Russian American Nuclear Security Advisory Council (RANSAC) — a non-governmental agency that advises both governments — this reactor elimination program was taken out of DOD hands because of Congressional restrictions prevent the use of CTR funds for purposes beyond weapons security and destruction.


Just this week, DOE officials were in Moscow to lay groundwork for the new plan. These officials declined to discuss the project “at this stage,” but Russian officials interviewed by Bellona Web see a number of looming issues before the reactors — which are located in closed nuclear cities — are shut down for good in about 2006. 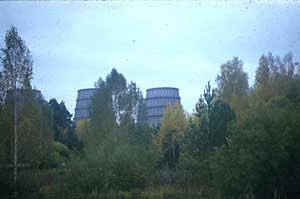 Among them are concerns for job that will be lost once radiochemical plants — which reprocess the fuel from these reactors — are shut down. Vladimir Kuznetsov, a former Nuclear Regulatory inspector and now with the NGO Green Cross, said in an interview with Bellona Web that the SNF from these reactors is reprocessed for weapons-grade plutonium.


Further quarrels are bound to erupt when it comes time to chose a place to build the fossil fuel plants — in the closed cities, or on surrounding civilian territory, plant officials and environmentalists said.


“A conventional heat plant, called Sosnovoborsk, is located 20 kilometres from Zheleznogorsk and has been under construction since late 1980s,” Anatoly Mamaev, member of a Siberian NGO Citizens’ Centre for Nuclear Non-Proliferation, told Bellona Web. The construction of the plant was later frozen after the collapse of the Soviet Union.


Meanwhile, until the fossil fuel plants are built — which may take $300 million by Duma Deputy Sergei Mintrokhin’s reckoning — the reactors will continue to operate and produce plutonium.


History of the Pentagon programme transfer

About a decade ago Russia operated a total of 13 plutonium reactors. Since then, 10 of these reactors have been shut down. The ones at Seversk and Zheleznogorsk have been allowed to continue operation thanks to the heat and energy they supply the surrounding region. By comparison, the United States has closed all of its 14 plutonium producing reactors.


In 1997, Russia and America signed an agreement under the aegis of CTR with the Russian Nuclear Ministry to convert the remaining three reactors in a way that they stop generating additional volumes of weapons-grade plutonium — the so-called core conversion project. The DOD, with cash and advice, was to implement that program, and a target date for full conversion of the reactors was set for Dec. 31, 2000 — a date that came and went with little progress made.


More clouds began to develop over the project. All three reactors were on average 32 years old and pioneers of the Chernobyl type RMBK reactor. The reactor in Zheleznogorsk went into service in 1964. Seversk’s reactors followed in 1965 and 1967. They were simply getting old.


Russia’s Nuclear Power Ministry, Minatom, began dragging its feet as the original conversion deadline of Dec. 31, 2000 approached because of the radiochemical reprocessing plants that would be closed, sending hundreds of workers home for New Year’s without jobs perspectives.

–>
In a rare accord, Minatom agreed with GAN and reported to the DOD that conversion was not expedient. DOD officials proposed the alternative plan of funding the construction of conventional fossil fuel plants through taking care of regional energy needs by 2006, and so the programme was reassigned to the DOE.


Meanwhile, the reactors would continue to operate, producing heat, energy and plutonium. Minatom’s erstwhile alliance with GAN, therefore, had a silver lining for the Nuclear Ministry: Minatom will gain another eight years of plutonium from the reactors.

Aside from the Congressional stipulations that CTR focus on weapons security and destruction, it also became clear, according to one official close to the process, that DOD was getting set to take a bath.


The program was “mismanaged — one word, mismanaged,” said the official speaking on the condition of anonymity.


“In the end a good feasibility study was not performed,” by the Russians for the core conversion project, he said.


“The original cost estimate for it when it was under DOD control was $75M — but they never realized that in addition to whatever conversion was required, the reactors also would require a different type of fuel — and that was a $100 million cost. That was not accounted for.”


In the end, the official said, the repeated feasibility studies had ballooned to $300 million and the schedule kept slipping, but, said the official, it was up to the Russian side to determine these fine points of the core conversion program.


“We cannot do their feasibility study, we cannot come up with their cost analysis? only they can tell you,” the official said. “They say ‘you you’ and we say its not our program, you are managing it. You tell us what the schedule is. You tell us what’s feasible, what’s required. We will review and decide whether we going to pay for it. So, in other words it was a fundamentally flawed approach.”

If all goes according to schedule under the new DOE stewardship of the “Elimination of Russian Weapons Grade Plutonium Production” the reactors will continue to produce plutonium in exchange for local power while the fossil fuel plants are being built.


At the end of that time, the reactors themselves will have to sit for another 50 years, loaded with spent fuel, until radiation reached levels acceptable for their dismantlement.


From now until the reactor’s closure date, they will have produced another 6000 kilograms of weapons-grade plutonium, which begs the question — why isn’t SNF from these plants put into conventional storage instead of reprocessed into basically worthless plutonium?


According to the anonymous official, the decision taken bilaterally by the Russians and Americans to continue reprocessing instead of opting for storage came out of space considerations at plants.


“It’s easier to store it in plutonium oxide form after its been reprocessed,” he said. “— It’s very uneconomical to just store spent fuel. It’s very bulky, it’s something that cannot be easily handled, it’s very hot.”


But even though the expected shut down date for the reactors is projected for 2006, experience shows such deadlines can be less than binding. The reactors, therefore will most likely die of natural causes. Minatom has managed to keep the worthless radiochemical plants operating so far and may succeed in doing so for another eight years.