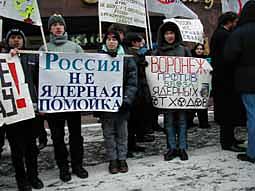 Last week, the Russian State Duma passed an amendment to the Law on Environmental Protection, thereby removing the last roadblocks for massive import of nuclear waste. At the same time the environmental group Ecodefence! reported that railroad carriages, destined for Russia, where being loaded with Bulgarian spent nuclear fuel. By the end of 2002 a steady flow of special trains is supposed to arrive in Siberia.


The proponents of the law stress that the import will be “important for the development of Russian industry and science.” Their opponents, however, express their scepticism towards the theory. They also question the financial part of the project. Russian authorities believe the income from the spent nuclear fuel import will constitute at least $20 billion. Environmentalists believe the sum will be much smaller, and that it will not be used to the promised clean up of areas contaminated by the nuclear industry. A Duma deputy from Yabloko faction, Sergei Mitrokhin, describes the “magical” 20 billions as a “myth”. He also believes that the Western governments now might end up abstaining from sending their waste to Russia, because they are afraid the long transport routes could expose the waste to possible “terrorist sabotage”.


Opposition Duma members have tried to reach a compromise with the parliamentary majority. Yabloko representatives presented a proposition suggesting that the waste be returned to the countries of its origin after reprocessing in Russia. The proposal was rejected by the Duma.


So was the attempt to make Sergei Mitrokhin a member of a new presidential commission on nuclear waste import control. The commission, will instead have five Duma representatives, who are all in favour of the waste import. Moreover, they all have close ties with the nuclear power industry. Vladimir Grachev, Mikhail Zlikhanov and Peter Romanov all represent interests of the Ministry of Nuclear Energy in the Duma. Robert Nigmatulin is the brother of the deputy minister on nuclear energy. And Sergey Shashurin has a criminal record. A couple of years ago he tried to start up a business together with the Kurchatov Institute with the aim to import radioactive waste from Taiwan and store it at Sakhalin.


There is a fierce public opposition against the import of nuclear waste. Three out of four Russians oppose the new law. On Wednesday a number of Russian environmental organizations held demonstrations in major cities along the Trans Siberian railroad. Leaflets handed out warned against the danger of an environmental catastrophe: “Look at the condition of our railroads: almost every week there are different accidents. When there is a train with nuclear waste coming, any accident may turn into a terrible environmental catastrophe, where thousands of people living along the Trans Siberian railroad might suffer!”


The liberal Yabloko party insists there must be held a national referendum. However, this might turn out to be easier said than done. Last year Russian environmental groups collected 2.5 million signatures for a referendum, only to be stopped by the Central Electoral Committee, which declared 600,000 of them invalid. Consequently, the organizations did not get the required two million signatures. Also this year the initiators will face obstructions. Ten days after Yabloko announced its intention to organize a second collection of signatures, a group of Duma members suggested to change the very law about national referendums.