Next week the Kozloduy nuclear power plant in Bulgaria will make a decision on transporting their spent nuclear fuel to Mayak for reprocessing.

Published on September 4, 2001 by Thomas Nilsen 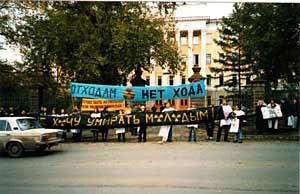 By 2003 the storage pools with spent nuclear fuel at Kozloduy NPP will be filled to capacity if the fuel is not transported away. The only alternative place to transport the spent fuel is to Russia, says the plants management. Negotiations are under way with Russia, which in the first place manufactured both the Bulgarian reactors and its nuclear fuel.

– The Russians have offered us very attractive terms of spent fuel storage and processing. We believe it should go where it came from in the first place – Russia, says the plant’s executive director Yordan Yordanov in an interview with the Bulgarian news agency BTA.

He wants to ship the entire amount of spent nuclear fuel generated at the plant to Russia. The storage pools are becoming a major cause for concern. – Unless it is solved by 2003, we will have to shut down the nuclear power plant, Yordanov said.

The challenge for the plants management is to find funding for the transportation to Russia for reprocessing. Therefore, a plan to export electricity to other countries is made. The proceeds from export of a mere 1,000 kWh of electricity can cover the costs. At present the Kozloduy NPP utilizes less than 60 percent of its capacity. If it operates its reactors at full capacity, and sell part of the electricity abroad, the extra income will cover the costs to get rid of the spent nuclear fuel.

A decision on this will be made at a September 12 meeting of the consultative council. The Kozloduy NPP operates six reactors of the Soviet designed VVER-440 type. The Russian environmental group Ecodefense has for years opposed the planned shipping of spent nuclear fuel from Bulgaria to the reprocessing plant in Mayak in the South-Ural.