The five member US Nuclear Regulatory Commission (NRC) approved for the first time in 34 years the construction of a nuclear power plant to be built by Atlanta, Georgia-based Southern Co. to build two reactors at its Plant Vogtle site near the town of Augusta.

Published on February 12, 2012 by Charles Digges 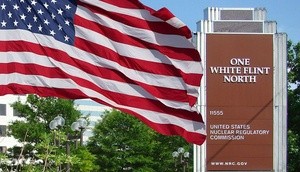 The approval is the first since prior to the Three Mile Island accident in Pennsylvania in 1978, one of the world’s most serious nuclear accidents until it was overtaken by Chernobyl in 1986.

Though the majority of the NRC voted to move ahead with the build, the vote was overshadowed by the lone dissenter, Commission Chairman Gregory Jaczko whose advisory role to the Japanese during the Fukushima crisis was significant.

Jaczko said according to US press reports that he was not satisfied that the license would compel Southern Co to adopt safety improvements that result from the ongoing review of the Fukushima accident.

Jaczko said it would be “very difficult” to get Southern’s compliance after the license was issued, the Los Angeles Times quoted him as saying.

Christopher Paine, a nuclear expert at the Natural Resources Defense Council, to the Associated Press that the NRC had “abdicated its responsibility” and given up the power to force Southern to adopt new safeguards that are developed as the Fukushima review unfolds.

The AP1000 reactor design is touted in on Westinhouse’s web page as having a “simplified plant design [that] includes overall safety systems, normal operating systems, the control room, construction techniques, and instrumentation and control systems.”

But Kudrik pointed out that the new and untested reactor design was really nothing more than a slightly modified version of the Pressurized Water  Reactors developed in the 1950s that are in use throughout the western world, and which underwent some slight modifications in the 1970s. Westinghouse notes that the AP1000 has fewer of the parts that usually cause various types of incidents and hazards. The reactor therefore has fewer pumps, fewer valves and fewer small tubes.

Kudrik noted that, “[Westinghouse] also says [on thier web site]  that they have implement technology in the AP1000 for passive cooling of the reactors. This was developed in the 1970s, so there’s nothing new.” 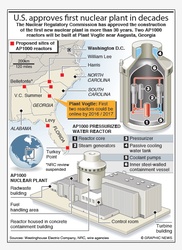 “Fukushima and other nuclear accidents have shown that the most unlikely scenarios may affect nuclear power plants,” Kudrik continued. “Although the likelihood of nuclear accident is very small, the consequences are so enormous that Bellona does not consider nuclear technology as a solution for world energy supply,” he said.

Nine US environmental groups plan a challenge to the new license in federal court in Washington, Stephen Smith, executive director of one group, the Southern Alliance for Clean Energy, an energy policy and environmental organization in Georgia, Tennessee, the Carolinas and Florida, said AP.

The groups say that the approval process was rushed and that regulators failed to incorporate lessons from Japan’s accident.

“In a very literal sense, the rubble has not cooled in Japan, and the NRC has granted a license for a new, unproven reactor design here in the United States,” Smith said.

The groups want federal judges to require the NRC to prepare a new environmental impact statement for the new reactors. They want the new statement to explain how cooling systems for the reactors and spent fuel storage pools will be upgraded to protect against earthquakes, flooding and prolonged loss of electrical power.

It may take several years before it becomes clear whether the license approval represents a rebirth of an industry.

Westinghouse officials told the Los Angeles Times they expected another license approval for their reactors from the NRC in coming weeks and noted that there were about 20 in various stages of planning, 14 of which would use the company’s new design.

The new reactors would mainly be located in the South.

Not all of those projects are likely to move through licensing, experts say, and there have been repeated claims over the last decade that the US nuclear power industry was on the brink of a renaissance. In fact, the industry is likely to move cautiously forward, if only for economic rather than safety reasons.

The heyday of nuclear plant construction almost bankrupted the US electric utility industry and saddled ratepayers with high bills for decades.

Former NRC member Peter Bradford, now a law professor in Vermont, told the paper that Thursday’s approval did not change the poor economics of nuclear power. What makes a difference in Georgia is that the state has ruled that customers are going to have to pay, he said.