The attorneys general of New York, Connecticut and Vermont have filed suit against the US Nuclear Regulatory Commission for the to challenge and NRC policy stating that spent nuclear fuel can be stored on site at nuclear power plants for up to 60 years.

Published on February 17, 2011 by Charles Digges 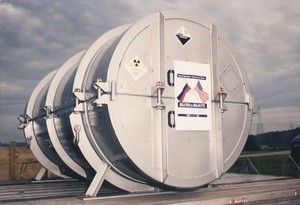 In the long run, cramped space for the storage of spent nuclear fuel in the United States could have unwanted consequences for Russia.

The NRC decided in December to extend from 30 years to 60 the amount of time that nuclear waste could be stored at the nation’s 104 reactor sites. NRC spokesman Neil Sheehan said Tuesday that the commission’s studies found such storage to be safe. This has been supported in the past by US Energy Department chief Steven Chu.

Schneiderman announced the suit at a news conference in White Plains, New York, about 22 kilometers from the controversial Indian Point nuclear plants in Buchanan, according to the Associated Press. Nuclear waste storage is among the issues in Entergy Nuclear’s fight to get new 30-year licenses for the Indian Point plants.

“Our communities deserve a thorough review of the safety, public health, and environmental risks such a move would present,” Schneiderman said, adding that “”I am committed to forcing the feds to take the hardest look possible at the risks of long-term, on-site storage, before they allow our communities to become blighted and our families, properties, and businesses threatened by radioactive waste dumps for generations to come.”

President Barack Obama is supporting more nuclear plant builds in the United States But waste storage is a major pot-hole, especially for nuclear utilities that were counting on the Yucca Mountain site in Nevada to take their waste.

Yucca Mountain has been killed by the new budget submitted to Congress by the White House, which makes no provisions for any Yucca related projects – an initiative several Republican Congressmen said they would oppose. This puts extra pressure on nuclear plants to come up with storage solutions, the attorneys general have complained.

In his 2009 budget, Obama deflated the overwhelming majority of expenditures on Yucca, a project that had been running for more than a decade, and dropped its application for a license with the NRC based on several potential leaks into groundwater found by an independent assessment of the site.

The states’ against the NRC

State utility regulators are suing the government in a separate case over the government’s obligation to provide final internment for spent nuclear fuel.

Obama established a panel in 2009 to review alternatives to storing spent fuel in the geological flawed Yucca site. The panel is exploring technologies for reuse of some components of the fuel and developing a process for choosing the site for a repository.

Speaking about the three-state suit against NRC, Vermont Attorney General William Sorel told the New York Times that,  “a prudent federal response to the problem of spent fuel storage might be different from one site to the next — that’s what this is about.”

With the ending of the Yucca project, said Sorell, there is more pressure on the nuclear power industry to come up with permanent waste storage solutions.

“If we take our feet off the accelerator there, the politics and other considerations of permanent storage will be allowed to go unresolved for a longer period of time,” he told the paper.

But the disposition of the lawsuit, and even the NRC’s position on storing waste on site, is unclear.

According to another NRC spokesman, David McIntyre, the lawsuit filed by the three states does not fully grasp the nature of the NRC decision doubling safe onsite storage from 30 to 60 years.

McIntyre told the New York Times that this was only an “opinion” from the Commission on how long waste could be safely stored, and not a rule or regulation permitting any plant to store spent fuel onsite for that long

But the nuclear industry and others who support more reactor building in the United States say they view the adoption of the NRC policy as a legal basis for new reactor construction and a way to handle long-term storage in the absence of other alternatives.

How US spent fuel is stored now

Problems with this approach arise because most nuclear power plants in service in the United States were designed to keep spent fuel onsite in earthquake proof pools before it was to be eventually removed for reprocessing.

An environmentally-based decision from the Administration of Jimmy Carter in the 1970s however, put the brakes on developing reprocessing, favoring an open fuel cycle wherein spent nuclear waste would be stored.

Reprocessing, as the Russian and other European examples show, creates several more tons of solid and liquid radioactive waste than it does usable fuel, and, hence, still leaves open the question about how to store highly radioactive by-products of nuclear energy.

The downside of this decision for US nuclear power plants is that most of them have too little space to store their spent nuclear fuel.

With no place to send the it, nuclear operators have instead built “dry casks,” small steel and concrete silos, filed with inert gas, into which spent fuel can be sealed. Most nuclear plants in the United States either currently store fuel in casks or have plans to do so, said the New York Times.

The NRC licenses such casks for 20 to 40 years of use, and after that, decides if the engineered life expectancy of such casks can be renewed. In some cases, reports the New York Times, casks designed for 20 years of use have been granted 40-year extensions on their use.

McIntyre quoted by paper as explaining NRC’s underlying logic for extending onsite storage from 30 to 60 years as being that “the casks are working really well.” They also require security guards.

McIntyre acknowledged that the use of casks at plants does not require an environmental impact assessment – which as presented problems – but that at times public hearings have been held, the paper reported.

One big for instance of the issues arising from the absence of environmental impact assessments is the current situation at Connecticut’s Yankee nuclear power plant.  This plant, which was torn down in 2007, is still host to dry casks of all of the fuel it used over its 28-year running period.

What are possible consequences for Russia?

The Obama panel exploring alternatives to Yucca, some of which are termed “recycling” – which reads as reprocessing – would put an end to the Carter Administration decision for a closed nuclear fuel cycle in the United States as well as a practice favored by Bellona as well as many other environmental groups internationally as well as in the United States.

A new civilian nuclear pact signed by the United States and Russia, called the 123 agreement, could allow for the import of US spent nuclear fuel to Russia, where Russia’s overburdened facility at Mayak – dubbed the most radioactively contaminated place on earth – would attempt to grapple with the new influx of spent fuel, most likely unsuccessfully.

Yet Russia has long sought access to US origin fuel for reprocessing, something it has publicly projected will be a $20 billion industry.

Another place US origin fuel may be reprocessed is an international uranium fuel bank slated to be built in Angarsk Russia, for which American tycoon Warren Buffet donated $50 million to the International Atomic Energy Agency on the condition that other nations raise the additional needed $100 million to complete the project.

The Mayak reprocessing facility operates at less than half of its projected annual throughput of 400 metric tons of waste, and the shortfall languishes on site awaiting its turn.

A full scale uranium fuel service facility in Angarsk, would, according to Sergei Kiriyenko, head of Russia’s state nuclear corporation Rosatom, move much of this activity to Siberia, relocating Mayak’s unsolved problems to a different locale in Russia.

None of the countries participating in funding the potential fuel bank have addressed the pending environmental consequences such a fuel bank.