NEW YORK – The US nuclear industry got a big boost and big oil took a hit when US president Barack Obama submitted his federal budget proposal to Congress last week, making good on a promise to the nuclear industry in his State of the Union speech last month to include it in America’s efforts to cut greenhouse gas emissions.

Published on February 7, 2010 by Charles Digges 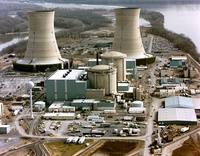 The increase in cash and loan guarantees for the nuclear industry were seen largely by analysts as a tactic to get more opponents of the languishing climate bill on board so real legislation can finally be passed by Congress. But the new policy represents a major shift in President Obama’s attitude to nuclear power. His stimulus package, which passed Congress shortly after Obama had taken office,  provided lush support for renewable energy and prodived scant resources and loan subsidies for new nuclear power.

A year later, however, the proposal of building more nuclear power plants was greeting by rousing applause from the Republican side of the aisle during Obama’s State of the Union address at the end of last month.

It is thought by many observers that Obama’s treasured climate bill, which has been foundering in the Senate since autumn, faces little to no chance of being passed this year unless large concessions on renewable energies are made, and Republicans – who no longer face the Democratic supermajority – are not thrown a substantial bone.

The budget submitted by the White House for 2011 calls for an immediate $36 billion increase – building to an eventual $54 billion increase – in federal loan guarantees to new nuclear power plants over the next 10 years, an amount industry experts say is enough money to build seven new nuclear power plants in the United States, which is currently operating 104. These plants supply about 20 percent of the country’s energy.

Over that same period, however, Obama wants to eliminate some $36.5 billion in subsidies to oil and natural gas companies – essentially swapping the money from one dangerous technology to another.

The US Department of Energy already has authority to grant $18.5 billion in loan guarantees, enough for two to four nuclear plants. If approved by Congress, the additional guarantees could help finance about six more plants, according to Steven Kerekes, spokesman for the Nuclear Energy Institute, an industry lobby group based in Washington DC.

The new federal loans for nuclear in Obama’s proposed budget will be a huge boost for the industry, which has not filed a new application to build a nuclear power plant since the late 1970s in the wake of the near melt down at Three Mile Island in 1979.

Indeed, even without plans for a new nuclear build, the Obama administration has been kicking the tires of old plants – including Three Mile Island – to see how much power can be squeeze from US plant, none of which are younger than 40 years old in an effort to offset greenhouse gas producing sources

Yucca is still off the map in Obama’s present budget after he an Energy Secretary have appointed a special blue ribbon panel to begin discussing options to Yucca.

It had been assumed even in the run up to Copenhagen in December that many countries – including the US – would re-examine their nuclear capabilities as a chip to throw in on reducing emissions. But Obama, after gutting the budget for the deeply flawed Yucca Mountain nuclear waste storage site in Nevada last year, had also said that no new nuclear plants would be built until suitable storage for America’s spent nuclear fuel could be found.

Is nuclear a realistic alternative to cutting emissions?

US observers have commented that nuclear alone will not even begin to make a significant dent in US carbon emissions for decades – well beyond the point at which the International Panel on Climate Change (IPCC) has said damage will be irreversible.

Nor, noted analysts, will a nuclear build out preclude reliance on coal power that must be regulated by a policy that makes carbon emissions cost money.

Joseph Romm, a climate change expert at the Center for American Progress, a non-partisan policy think tank based in Washington DC, says support for nuclear power will be ineffective without a comprehensive climate change policy that puts a price on carbon.

“You aren’t going to stop building coal plants because you have new nuclear plants,” he says. “Coal plants are still cheaper to build.”

There is also a high risk of default on the loans for companies building state-of-the-art reactors.

The Union of Concerned Scientists again on Friday cited a 2003 Congressional Budget Office report that estimated the nuclear industry’s history of project cancellations and cost overruns places the risk of default at around 50 percent. To protect taxpayers, the groups said, the government’s credit fee should reflect that big of a risk.

Bellona has on many occasions, including at the Copenhagen climate talks in December, voiced its opposition to relying on nuclear power to reduce carbon emissions. Bellona says that the billions that stand to be poured into nuclear power plants will divert funding from cheaper, renewable sources that, if cultivated, would supply the energy many countries, including the US, intend to draw from nuclear sources.

Once that money is spent on building nuclear power plants, the group has reiterated, the world will be left not only with a worsening climate emergency, but an overabundance of nuclear waste and spent nuclear fuel as well. This is an especially poignant problem in countries like Russia were 97 percent or more of spent nuclear fuel storage space is already occupied.

As for the US, some 60,000 metric tonnes of spent nuclear fuel is also homeless now that Yucca is off the table. Though ditching Yucca had been, in the eyes of many powerful environmental groups, including Bellona, as well as lawmakers, one of the better decisions made by the Obama administration, experts from the Union of Concerned Scientists have said the panel now examining alternative sites could take decades to come up with something workable.

No country in the world has yet addressed storing nuclear waste and spent nuclear fuel safely for more than 100 years, where over 100,000 is the estimated reasonable time frame over which this waste will become inert.

Other critics of nuclear power maintain that the new projects are likely to be hit with heavy cost overruns, and that pledging government credit to support large-scale reactor construction is poor energy policy.

“A massive increase in taxpayer subsidies for nuclear power would be a mistake,” Christopher Paine, director of the nuclear programme at the Natural Resources Defense Council, said.

“Energy sources should compete for public dollars based on how well they provide the clean, efficient and affordable power we need,” he told ClimateWire. “On that basis, nuclear power has a long way to go. It remains a high-cost, subsidy-dependent, radioactive-waste generating, water-depleting, non-renewable energy source that still carries with it the low probability of a high-consequence accident.”

She called it “irresponsible” to balloon the programme so it can match the rising cost of building next-generation nuclear power plants.

If Obama’s nuclear loan proposal is tucked into the Energy Department budget plan, as expected, the proposal would appeal to Senate Republicans who have said nuclear power is a zero-emissions energy source that should be part of any federal plan to address global warming and increase energy security.

“These loan guarantees would enable utilities to lower the cost of financing and cost the taxpayer little to nothing when the loans are paid back,” Senator Lamar Alexander, a Tenessee Republican, said.

“It is a very useful step toward providing more confidence for the nuclear renaissance,” said Connaughton, who served as chairman of the White House Council on Environmental Quality in the Bush administration. If Congress backs the loan guarantee increase and continues other incentives, Connaughton said, and the administration makes it clear that nuclear power is part of the response to climate change, then the industry will come forward with a growing number of reactor projects.