Foreign radioactive waste may soon be headed for the United States

In a move that would be familiar to the anti-nuclear movement in Russia, a federal judge in the United States has ruled that a company in the state of Utah can dispose of several tons of European generated nuclear waste in Utah, representing the first time the country has ever allowed foreign waste to be stored on it’s territory. 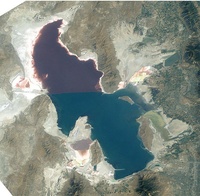 The decision has sparked a flood of environmental controversy. Bellona, which supports the policy that each country should be responsible for its own nuclear waste storage, joins the protest of the US court ruling.

Aside from setting a precedent for storing nuclear waste from other countries, said many US environmental groups and members of US Congress contacted by Bellona Web, there is precious little storage space to go around now that the Administration of President Barack Obama has shelved the infamous Yucca Mountain facility and projects may soon be ramping up to build new nuclear power stations.

The decision also comes at a time when the United States is grappling with how to deal with storing far more dangerous radioactive substances like plutonium as the Obama Administration lays out his intentions to make deep bilateral slashes with Russia in the US nuclear weapons arsenal.

Final approval of the Utah storage plan lies with the US Nuclear Regulatory Commission (NRC), and the Utah company has filed an application, an NRC spokesman told Bellona Web Monday. The court decision rules in favour of EnergySolutions, Inc. which wants to import 20,000 tons of low-level radioactive waste from Italy.

Responsible spokespeople at the Italian Embassy in Washington, DC would not comment on their country’s need to send radioactive waste to the United States telling Bellona Web that, “the issue is controversial and still undecided conclusively.”

Italy has four nuclear reactors, according to the World Nuclear Association, two of which were shut down after the Chernobyl disaster in 1986. The Italian government has announced intentions to build new nuclear power plants by 2013.

After the Italian waste is processed in Tennessee, about 1,600 tons of the material would be stored in Utah. The waste is expected to enter the United States through ports in South Carolina and New Orleans.

EnergySolutions, Inc. says that the move will improve its relationship with foreign customers, with the aim of building disposal facilities abroad. The company has pledged to limit the amount of international waste disposed of at its Utah facility to 5 percent of its remaining capacity.

At issue before the court Friday was Utah Governor Jon Huntsman’s use of his veto power over an interstate compact to keep out foreign waste.

Congress established in the 1980s a compact – called the Northwest Compact – such that states could band together to dispose of their own radioactive waste to ensure that no one state would become the US national dumping ground for nuclear waste. The decision came roughly at the same time that Congress decided that Yucca Mountain in Nevada would become the United States dumping ground for nuclear waste.

Yet, even since the Congressional ruling establishing the Northwest Compact, only a site in Washington State and one in South Carolina serve as disposal sites under the compact.

EnergySolutions, near Salt Lake City, was never intended under the original Congressional decision to be a part of the disposal compact. It therefore challenged the parameters of the compact in federal court, saying that the compact could not regulate a private facility.

"We have always felt confident in our legal position," Steve Creamer, EnergySolutions’ CEO, said in a prepared statement. "We are pleased that this ruling ends any question on this matter."

The company’s pending import license for low-level radioactive waste has drawn a deluge of negative reaction.

Tom Clements, Southeastern Nuclear Campaign Coordinator for the environmental group Friends of the Earth, said Saturday he’s encouraging port officials and unions to use all legal means to keep the waste from coming on shore, the Associated Press reported.

"Italy and the rest of the world must deal with their own radioactive waste and not continue irresponsible attempts to dump their dangerous material here," said Clements.

Utah Congressman Jim Matheson and Tennessee Congressman Bart Gordon, both Democrats, said in statements that the EnergySolutions site should preserve its capacity for domestic waste in the wake of the Yucca Mountain project’s  shutdown.

The congressmen contend that the disposal site, which is the only one available to 36 states, should preserve its capacity for domestic use as the US increasingly looks at expanding the use of nuclear energy.

"It’s wrongheaded to think that other countries can simply solve their own radioactive waste disposal problems by dumping thousands of tons of it in Utah," Matheson said in his statement.