Japan’s foreign minister, Masahiko Komura, criticised his subordinates after they failed to notify him for nearly a full day about a potential radioactive leak aboard a nuclear powered US Navy submarine, Japanese officials confirmed to Bellona Web in email interviews Wednesday.

Published on August 6, 2008 by Charles Digges 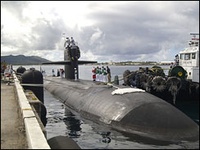 Komura said he learned of the leak from Japanese Television reports on Saturday, a day after his subordinated where apparently notified by the US Navy that the USS Houston, a Los Angeles class fast attack submarine, leaked trace amounts of radiation during a stop-over last spring in Sasebo in Western Japan, Japanese government spokesman Nobutaka Machimura said.

One crewmember of the Houston was exposed to the radiation, US Naval officials said.

After the stop over, the Houston crisscrossed the western Pacific from March to June, spending a week in Sasebo in late March and stopping over at its home base of Guam and Hawaii from May to June.

The problem was discovered on July 24 after the sub went through a regular maintenance check in Hawaii, US Naval officials confirmed to Bellona Web, adding the water had not been in direct contact with the nuclear reactor and that the member who was exposed to the water proved to be unaffected.

The Navy reported the case to health authorities in Hawaii on July 25th.

According to Japanese government statement, the government was informed Friday by the United States Navy that the Houston might have discharged an amount of radiation that was considered too small to be harmful.

Machimura, said earlier in a news conference that the radioactive amount — estimated at less than half a microcurie — was too insignificant to “affect the human body or the environment.”

One microcurie is one millionth of a curie.

Japan protests new US nuclear vessels
The Japanese government and American military have been trying to ease public resistance to the stationing in September of a nuclear-powered aircraft carrier, the George Washington, in Yokokusa, southwest of Tokyo.

The scheduled arrival of the USS George Washington, which will replace the diesel-powered aircraft carrier USS Kitty Hawk, has caused protests in Japan, the only country to have been attacked with nuclear weapons.

Some 10,000 people turned out in the Japanese city of Yokosuka last month to protest the American plan.

Relations between the Japanese public and the US military have also been strained in recent months by incidents of misbehavior involving US servicemen.

Government embarrassed
The announcement of the leak was an embarrassment for the government of Prime Minister Yasuo Fukuda, who shuffled his cabinet on Friday in a bid to raise his low approval ratings, the Associated Press Reported.

Most government officials learned of the leak Saturday from television reports even though the United States Navy had informed the Japanese Foreign Ministry a day earlier.

“I, too, came to know about it this morning on television,” the foreign minister, Masahiko Komura, said at a news conference on Saturday.

The most significant of these occurred in July 2005, when the USS San Francisco, also a Los Angeles class fast attack submarines, ran aground near Guam while en route to Austrailia, killing one crew member. Another 20 of the submarine’s 127 strong crew were injured, triggering a large scale rescue mission to tow the sub to port in Guam.

Other incidents involving US submarines worldwide include a 2007 collision between the USS Newport News and a Japanese tanker in the Straits of Hormuz in the Persian Gulf. Damage to both vessels was insignificant.

Another US submarine collision in the Persian Gulf was reported in September 2005 when the USS Philadelphia collided with a Turkish cargo tanker. The sub put into Bahrain, Saudi Arabia for repairs. A coast guard vessel that examined the Turkish freighter said it did not require repairs.

In 2003, the US Navy infuriated Italian officials when the USS Hartford, also a Los Angeles class sub, when they tried to conceal that the sub had run aground in the Mediterranean after it set sail from its Italian base in Sardinia.

The USS Hartford, hit the rocky seabed of the Mediterranean with such force that rudders, sonar and other electronic equipment were severely damaged.

By it’s own admission, the US Navy tried to keep the incident under wraps, but the USS Hartford’s sailors returned home early from what was supposed to be a six-month deployment, US media caught on to the accident and force the Navy to come clean.

Not smooth sailing for USS George Washington
The aircraft carrier, USS George Washington – which is currently deploying to Japan to relieve the USS Kitty Hawk – has also had its share of problems while in transit to its new quarters in Japan. A large-scale fire broke out on the aircraft carrier after it set out for Japan in May. The fire was traced to crew members smoking near improperly stored flammable materials.

While there was no damage or threat to the nuclear reactor, the ship was diverted to San Diego for repairs. It is now expected to arrive in Japan at the end of September.

The Navy this week fired the captain and his deputy, saying an investigation into the fire led to a lack of confidence in the leadership of both men, US Naval officials said.