Uranium windfall for US government poses tough questions for DOE

NEW YORK-Having accumulated vast quantities of uranium when world prices were low and buyers were scarce, the United States Government now has a surplus on its hands when prices have soared some 10 times since the price slump, Washington must now face tough questions about what to do with its nuclear piggy bank.

At issue is some 25 million kilograms of uranium hexafluoride –so called high assay uranium tailings – that was incompletely processed at US government enrichment plants during the price slump. The enrichment plants separate uranium-235, a rare type that splits easily in bombs and reactors, and uranium-238, which does not.

During the uranium price drop, Washington decided to save money by skimming off only the uranium 235, which is easier to obtain during processing, sources at the US Department of Energy (DOE) told Bellona Web Tuesday.

“In the old days, they left a lot of good stuff behind,” said Julian Steyn, a uranium expert at Energy Resources International, a consulting firm in Washington in remarks reported by the New York Times. He could not be reached for further comment.

Uranium feeding frenzy
Frenzied lobbying from the US to Europe has broken out over who should receive the treasure chest of uranium-235, which is slated to become reactor fuel after it is run through an enrichment plant.

The estimated market value of the uranium in question is some $700 to $3 billion, DOE officials said – yet one of the most vociferous companies vying for this mother load – the United States Enrichment Corporation, or USEC – says it should essentially get the surplus for without paying anything. In return, said USEC, the United States will get boosted technology at its single enrichment plant and increased energy security.

But USEC is facing tough opposition on Capitol Hill, where many representatives say that giving the uranium to the company would be rewarding it for fiscal mismanagement.

Last Thursday, several senior members of Congress, led by Michigan Democratic Representative John Dingell, who is chairman of the House Energy and Commerce Committee – asked the Government Accountability Office to evaluate the options.

USEC’s Elizabeth Stuckle said that the company “denies allegations [of financial mismanagement]” and said that USEC obtaining the high-end assay tailings – some of which contain an enrichment of 50 percent or higher – would be a financial and technological advantage to both the company and the DOE.

In its current form, the material is not attractive to the makers of illicit bombs, because the technology to sort the two types of uranium is cumbersome and found in just a handful of plants around the world, DOE representatives told Bellona Web.

USEC and the HEU-LEU agreement
USEC was formed in the 1990s to privatize the enrichment monopoly that the government had run since the days of the Manhattan Project. USEC is also the US government’s agent in a key post-Cold War Soviet nuclear disarmament project called the HEU-LEU, or “Megatons to Megawatts” programme.

The HEU-LEU agreement, which is scheduled to run through 2013, stipulates that the US buy 500 tons of HEU from Russia for a total of $7.5 m. USEC is currently purchasing the uranium at the rate of 30 tons annually for an average price of about $440 m, and shipping back both the enrichment and uranium components, according to USEC representatives.

Uranium could provide ‘value’ to DOE and upgrades to USEC
Stuckle said whether the high assay uranium tailings were obtained by USEC or not would have little impact on the HEU-LEU agreement. But according to a senior Senate aide, who spoke with Bellona Web on the condition of anonymity Tuesday, the uranium gift could make or break USEC.

The aide who has been briefed on the discussions said that the company’s future was uncertain and that if it were sold and broken up, the government would effectively be subsidizing some other entity “which could have serious implications for the HEU-LEU programme, though it is hard to predict what [kind].”

But if the uranium windfall does come their way, USEC believes that it will provide modernisation of its World War II era enrichment facilities and royalties to the US government.

At the moment, the single enrichment facility operating in the United States is in Paducah, Kentucky, and was built by the old US Atomic Energy Commission. It is run by USEC. 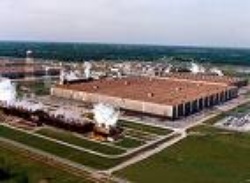 The technology at the plant, though, is outdated, and USEC is struggling to commercialise a more efficient system, using centrifuges, at another plant, in southern Ohio. Stuckle said she could not project how much the project would cost, but said it is approaching a number of investors and other fuel cycle facilities to raise capital.

One of USEC’s primary arguments that the government should give it the remaining uranium is that it is a way to ensure that any new enrichment technology that is developed is American owned.

“Essentially, it would be a win-win situation for everybody,” said Stuckle.

That solution would add uranium to the market thus lowering high prices, Stuckle said, and prolong the life of the Paducah plant and help pay for the centrifuges, whose technology the government owns and licenses to USEC. The government would collect royalties and receive new technology.

Other USEC officials said the DOE could transfer much of the uranium to it with the stroke of a pen, but DOE officials have indicated they are reluctant to act without guidance from Congress.

Congressional reaction
So far, the reaction from Congress to the notion of turning the high assay uranium tailings over to USEC has been resoundingly negative, and has been called a “bailout” by Dingell for “executives who have mismanaged their companies.”

“There needs to be vigorous oversight of USEC’s request for a bailout, to ensure the taxpayer’s interests are protected,” said Dingell in a statement issued to Bellona Web.

USEC, he said, had “squandered resources on multimillion-dollar golden parachutes, stock buybacks and dividend payments that frequently exceeded their earnings.”

USEC President and CEO John Welsh protested these claims in a letter to Dingell, a copy of which was obtained by Bellona, saying the uranium enrichment programme “would benefit US utilities and individual consumers by meeting a near-term shortfall in uranium supply, as well as provide value for DOE, afford an opportunity for value creation by USEC that serves the US energy security interests, and extend the life of the Paducah enrichment plant in Kentucky.”

The tailings, accrued over 40 years, wrote Welsh, were only recently discovered to have value.

“Recent changes in the market fundamentals for uranium supply and demand have led to dramatic increases in uranium prices that justify cosideratons for DOE tails re-enrichment to generate uranium for use in the market,” read the letter. Welsh explained that the Paducah plant, built primarily for weapons manufacturing, had been designed taking little account for the amount of electricity it consumes – driving USEC’s operating costs up by 50 percent at the facility.

Allowing USEC to re-enrich the 25 million tons of tailings at the Paducah facility, the letter continued, would put USEC on better footing to secure financing for one of the company’s primary projects – the American Centrifuge Plant in New Mexico.

Stuckle said all of the considerations laid out in Welsh’s letter were currently under negotiation.

Selling the uranium
If the uranium is sold, it would be up to Congress to decide what to do with the income. One possibility would be to use the money to offset cleanup costs in the DOE’s nuclear complex.

In addition to USEC, a consortium of British, Dutch and German companies has expressed interest in the partly processed uranium for the American Centrifuge Plant, which would use the same type of machines that have operated for years in Europe.

Congressional aides told Bellona Web that one possibility is that the government would lend the uranium to the consortium, to be “repaid” later, when prices will presumably be lower.

“Before the government does anything, it needs to have a serious open debate about the future of USEC, with the specific end goal of criteria for deciding when enough is enough,” said Andrea Jennetta, publisher of Fuel Cycle Week, a newsletter, as quoted in the New York Times.