Russian President Vladimir Putin blasted the United States for pursuing unilateral, militaristic policies that he said “overstepped” its role by using “almost uncontained” force, making the world a more dangerous place than during the Cold War, constituting some of his harshest words toward America since he took office seven years ago.

Published on February 10, 2007 by Charles Digges 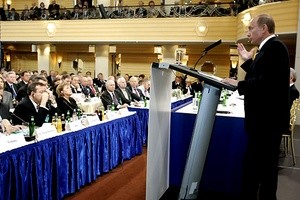 The blistering attack underscored mounting tensions between Washington and Moscow that threaten to renew an almost uncontrollable post 9/11 arms race including several nations that would be very different from the comparative stability of the bilateral Soviet-American theory of mutually assured destruction, and could signal a drastic departure from current Russian-American relations.

Speaking at the 43rd annual Munich Conference on Security Policy, Putin said nations “are witnessing an almost uncontained hyper use of force in international relations.”

He said that “one state, the United States, has overstepped its national borders in every way.”

Putin said this “very dangerous approach” to international relations is “nourishing an arms race with the desire of countries to get nuclear weapons,” according to a transcript of his remarks published on Kremlin.ru.

"Nobody feels secure anymore, because nobody can take safety behind the stone wall of international law," he told the international security conference that was attended by 250 observers, including 40 foreign and defense ministers and other officials, including US Defense Secretary Robert Gates and a US congressional delegation.

Putin’s frank remarks in Munich were aimed not only at the United States, but the West as a whole, and he told Europe and Washington to back off pushing Moscow to be more respectful of human rights – a clear swipe at the West’s criticisms of Russia strict new policies on international non-governmental organizations operating in its territory and international outrage over several high-profile politically motivated murders.

“Russia is constantly being taught democracy, and the people who try to teach it don’t want to learn it themselves,” Putin said.

Putin has said that Western criticism of his rollback of democracy stems form a Cold War mentality, and he has long opposed the US operation in Iraq. His remarks in Munich seemingly were not prompted by any particular provocation. In a tone that was more a considered lecture than a Krushchev-era dias-thumper, Putin said Russia would pursue an independent foreign policy

"We are not going to change this tradition today," he said.

Putin ended his 32-minute critique by attacking the West’s view of international relations. Stability and economic justice, he said, should be "not only for the chosen ones, but for everybody.

US Defense Secretary Robert Gates, who was present in Munich, called the speech “very candid” in remarks reported by CNN. But Connecticut Democratic Senator Joe Liberman, who also attended, described Putin’s remarks as “provocative” and said they “sounded more like the Cold War,”

Lieberman said Putin’s charge that the US "aspired to get uni-polar power or acted unilaterally is just not borne out by the facts."

In Washington, the White House also reacted strongly. "We are suprprised and disappointed with President Putin’s comments," spokesman Gordon Johndroe said in a statement. "His accusations are wrong. We expect to continue cooperation with Russia in areas importants to the international community such as counterterrorism and reducing the spread and threat of weapons of mass destruction."

But Russian political analyst Vladimir Pribylovsky, who heads the Antikompromat Internet library, suggested Putin’s words were more for Russian domestic consumption than opinions to be taken seriously by the West.

But Bush has grown increasingly disaffected with Putin and occasionally has tried to prod him to recommit to democracy and better relations with Russia’s neighbors, only to be rebuffed. Bush has been reluctant to force more direct confrontation out of concerns that it would push Putin further from the West and because Washington needs Russia’s help to pressure Iran to abandon its nuclear program.

Putin spokesman: Speech an ‘opportunity to think’
While acknowledging in a telephone interview that the speech was the Russian president’s harshest since his election in March 2000, Putin’s spokesman, Dimitry Peskov, said the leader’s oratory was "not about confrontation, it’s an invitation to think"

"The reason for his comments is Russia’s concern about the growing amount of conflicts and the malfunctioning of international law," said Peskov.

"Until we get rid of unilateralism in international affairs, until we exclude the possibility of imposing one country’s views on others, we will not have stability."

Following his speech, Putin fielded questions from the audience, elaborating on several of his points but backing down from none, The Washington Post reported.

Explaining his view that the world is now more dangerous than it was during the Cold War, he said that back then, "It was a fragile peace, a scary peace, but it was fairly reliable, as it turns out. Today it is less reliable."

Putin Alluded to Russia’s indirect cutoff of crucial energy supplies twice in the past two years, insisting that Russia’s actions are simply intended to put its energy exports on a transparent, market based systems built on long-term contracts.

His one olive branch to the US administration was to describe US President George Bush as "my friend." Putin added, "He is a decent man, and one can do business with him."

An assertive or a wounded Russia?
Analysts interviewed by Bellona Web characterized Putin’s bold speech as a harbinger of a more assertive Russia. The BBC’s defense and security correspondent, Rob Watson, wrote from Munich that “Putin’s speech was a strident performance that may well be remembered as a turning point in international relations.”

But whether that turning point will lead Russia toward becoming a powerful and constructive voice on the world stage or a belligerent, defensive and isolated autocracy remains to be seen.

Some European diplomats interviewed by Bellona Web saw Putin’s attack on the United States as a preemtive strike to deflect criticism of Russia that has been building in European captitals. In addition to the ongoing crackdown on pro-decomcracy groups and political opponents, Russia has antagonized some in Europe with is use of energy as a foreign policy tool.

Pavel Felgenhauer, a Russian military analyst with the Moscow-based Novaya Gazeta, said in a telephone interview with Bellona Web that Putin has been “wounded” in the eyes of the world by recent murders of Kremlin critics, the widely condemned laws stifling NGOs that allow the Russian government to shut down civil society organizations basically on whim, Moscow’s use of its energy resources to pressure its neighbors, and Moscow’s split with Washington on Iraq, Iran and other issueds.

A high profile thorn in the Kremlin’s side was murder of KGB defector and Putin critic Sergei Litvenenko, who was poisoned in his London apartment with the radioactive isotope polonium-210, which is produced exclusively in Russia, and constituted the first documented act of nuclear terrorism.

Though there is no direct proof connecting the Kremlin to Litvinenko’s death, there is also no shortage of circumstantial evidence that ties Russia’s corridors of power to the high-tech assassination. Yet other theories in Moscow’s conspiracy ridden circles assert that Putin’s enemies committed the murder to damage his reputation abroad.

Weeks prior to Litvinenko’s death, journalist Anna Politkovskaya – whose unsparing coverage of the Chechen war, criticism of Putin and international fame in human rights and journalistic circles made her one of the Kremlin’s most hated enemies – was shot dead in the foyer of her apartment building.

Both incidents brought down an international firestorm on Putin’s government, and Putin’s own truculent and unsympathetic responses to the press about the events did little to help his international image.

Russo-Iranian nuclear relations
Also in attendance in Munich was Iranian nuclear negotiator Ali Larijani. Iran has been the subject of United Nations imposed sanctions in December because it failed to stop enriching uranium. A ban on goods that could be put to use in Iran’s growing nuclear program was put into effect. The UN has issued a new April deadline for Iran to cease unranium enrichment – a notion that Iranian President Mamoud Ahmadinejad was already vociferously rejecting on Saturday, Iranian news agencies reported.

But Russia, which is building an $800m, 1,000 megawatt light water reactor in Iran’s port of Bushehr, has ardently defended Tehran’s right to pursue nuclear energy and denies that the Islamic Republic is pursuing the bomb.

Russia, as a permanent member of the UN Security Council, only approved the UN sanctions when the wording excused Russia from stopping its own nuclear industry imports. The Bushehr reactor is due to come online later this year.

In light of Putin’s suggestion that the world was at risk of becoming more polarized along nuclear lines, some analysts interpreted his comments as a mild hint to Iran to pursue a nuclear balance of power – perhaps with the tacit support of Moscow.

“Putin is not suggesting any kind of nuclear alliance with Iran,” he said. Russia’s nuclear interests in Iran, he said, are of a strictly commercial nature. Indeed, Russia has expressed its interest in building as many as four more nuclear reactors in Iran once Bushehr is completed.

Additionally, Iranian officials announced Saturday in an apparent gesture of good faith that they will install surveillance equipment at the Natanz uranium enrichment site to allow the UN’s International Atomic Energy Agency (IAEA) to monitor enrichment activities – something Tehran had long resisted.

There was "no way around" the need for Tehran to accept demands from the IAEA, she said.

"What we are talking about here is a very, very sensitive technology, and for that reason we need a high degree of transparency, which Iran has failed to provide, and if Iran does not do so then the alternative for Iran is to slip further into isolation," AP quoted Merkel as saying.

Larijani has been repeating Iran’s position that it wants nuclear energy, not nuclear weapons.

"We believe the Iranian nuclear dossier is resolvable by negotiation," Larijani was quoted by Reuters as saying on the sidelines of the conference.

European diplomats are hoping to hold informal talks with Larijani at the two-day summit. It would be their first meeting since the collapse of talks last year and the imposition of the UN sanctions. But US Senator Lindsay Graham, a Republican from South Carolina, said hopes should not be high for the negotialtions, saccording to the The Washington Post.

"If you’re waiting for Russia to be constructive on Iran, forget it." Putin, she said," did more in a single speech to unite Europe and America than anything we could have done in a decade."