Vis menyen
Bellona.org > Latest News > Nuclear issues > Accidents and incidents > US attack sub runs aground in the Pacific, killing one

US attack sub runs aground in the Pacific, killing one

A US nuclear attack submarine ran aground in the Pacific Ocean Friday for reasons as yet unclear about 420 kilometers south of Guam,injuring 23 sailors of the submarines 137-member crew—one of them fatally—as the vessel was engaged in a five-month patrol, US naval officials said Saturday.

Published on January 8, 2005 by Charles Digges 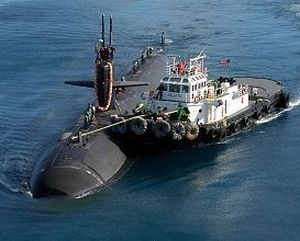 There have been no reports of damage to the USS San Francisco’ single reactor plant, which was operating normally after the accident, the US Navy said interviews with Bellona Web Saturday.

According to reports release by the US Navy Monday, one sailor was killed when the submarine hit something "topographical" while en route to Australia, the Associated Press reported. The navy has not released the name of the deceased crew member.

Jon Yoshishige, a spokesman for the U.S. Pacific Fleet based at Pearl Harbor, said the Friday afternoon incident is under investigation and the 109-metre submarine is headed back to its home port of Apra Harbour, Guam—a US territorial holding in the mid-Pacific.

US military ships and planes were rushing Saturday to the western Pacific to rescue the nuclear submarine and its injured crew and escort it back to the island of Guam.

Details on the sailors’ injuries were not immediately available, said Yoshishige. The crew consists of 12 officers and 115 enlisted personnel, and it remained unknown Friday how many of the 20 injured in the mishap were officers and how many were enlisted.

The USS San Francisco is a Los Angeles class fast attack submarine with a submerged water displacement of 6,900 tonnes. It carries four torpedo-tubes, which can launch Tomahawk cruise missiles, which are capable of carrying nuclear warheads. But Yoshishige would not comment on the condition of the weaponry the USS San Francisco was carrying or if it was, indeed, carrying them.

Other recent US sub incidentsthe USS Hartford
The incident with the USS San Francisco is somewhat reminiscent of another US Navy submarine mishap in November 2003, when the USS Hartford, of the US 6th Atlantic Fleet ran aground in the Mediterranean Sea north of Sardinia. In this case, though, the US navy sought to hush the incident, which it did successfully for a month until relatives of the Hartfords crew began speaking to the press about the reasons behind the submarines early arrival to its home port Sardinian base at La Maddelena, Italy.

Italian officials were furious with the US Navy for its cover up of the incident. One US naval official speaking with Bellona Web on the condition of anonymity after the accident, said Washington had admittedly tried to keep a lid on the accident. 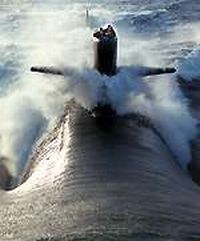 The USS Hartford—also Los Angeles class submarine—hit the rocky sea-bed of the Mediterranean on October 25th, 2004 with such force that rudders, sonar and other electronic equipment were severely damaged, the US naval official said. The 114-metre long USS Hartford had left its Sardinian base at La Maddelena carrying Tomahawk missiles, possibly loaded with nuclear warheads, though US naval sources would not confirm this information at the time of the incident and still have not.

Over 25 years of the USS San Francisco
Built in Newport New, West Virginia at a cost of $900 million and first put to sea in October, 1979. The sub was initially based in Pearl Harbor, Hawaii. After a series of technical upgrades between 1989 and 1990, the USS San Francisco was re-launched and reassigned to the territorial port at Guam.

The USS San Francisco has never, until now, been involved in any serious incidents, said naval spokesman Yoshishige. The vessel completed two highly successful deployments to the western Pacific in 1992 and 1994 with ports of call in Hong Kong, Singapore, Chinhae, South Korea, Guam, Sasebo, Japan and Yokosuka, Japan..

The Los Angeles class has recently become the most common type of US attack submarine in the US naval fleet since 2004.

In light of the USS Harford and USS San Francisco incidents—falling within 13 months of one another—another US naval spokesman, who requested anonymity, said that the US navy was not as yet considering our large deployment of Los Angeles class submarines, but this will surely be examined in the upcoming investigation.