The British Ministry of Defense admitted earlier this week that a UK nuclear submarines had leaked radioactive coolant at least three times over the past six years at Scotlands’s Faslane Base in a disquieting disclosure that was obtained by UK television station filing a Freedom of information Act petition. 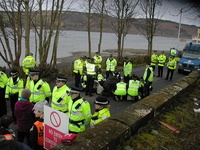 Yet other secret documents released disclose that there might have been at least eight radioactive leaks in the last 10 years, bringing the total number of acknowledged accidents at Faslane over the last three decades to more than 40, the 100 page report released to the UKs Channel 4 news indicated.

The report also discloses that many of the ageing facilities used to process, store and dispose of radioactive waste at Faslane are not fit for purpose.

The document on the leaks obtained by Channel 4 also showed the Navy did not know how much radioactivity was discharged, but environmentalists have said it poses little threat.

The Scottish government in recent years has been fiercely anti-nuclear, and has refused to take part in UK Prime Minister’s plans for an enormous nuclear build-out on environmental grounds.

The Faslane base on the Clyde, near Glasgow, is home to Britain’s Trident nuclear missiles. Environmental Watchdog the Scottish Environmental Protection Agency (Sepa) said it would have considered closing Faslane if it had had the authority.

Yet Sepa was also quick to say in through a spokesman that the radiological consequences were minor, and that Sepa’s main concern was that proper procedures had not been followed.

In the report the Ministry of Defence (MoD) described the failings as a "recurring theme,” as quoted by Channel 4 Television.

"We are not talking about a one-off incident but a whole catalogue of serious and frankly shocking failures, Robertson, said in a statement.

"Sepa’s indication that it would consider closing the base, if it had the power to do so, underlines just how grave this situation is. It is not good enough to say the MoD is exempt from radioactive safety regulations, and ministers must be held to account.”

Parliamentarian demands investigation
He added: "We need an immediate and top-level investigation into this scandal."

According to the Guardian, the three worst leaks of radioactive coolant occurred from nuclear submarines occurred in 2004, 2007 and 2008. The Channel 4 news report indicated that Faslane workers failed to measure the amount of effluent which leaked or detect the leaks until after the incident."

The radioactive manager at the plant was replaced, according to the Guardian. “It emerged he had no qualifications in radioactive waste management,” the paper quoted a plant official as saying.

Sepa’s response at the time was a formal letter to Faslane expressing its concern. It noted that it had not been told about the incident for six days.

In February 2008, it happened again. This time HMS Torbay was warming up its reactor when a tank overflowed.

Sepa issued another letter in the form of an enforcement notice.

A British Ministry of Defence spokesman said in an email interview with Bellona Web that, "The discharges  (…) had no environmental consequences.”

Military vs. civilian oversight
"The MoD is a responsible nuclear operator and informed the appropriate regulatory authorities”, he wrote. “We commissioned an independent study into the facilities and practices at HM Naval Base Clyde and an improvement plan is currently under way to ensure modern standards and best practice at the base."

He continued that, “Sepa is said to have agreed the risks appeared slight but argued that in many cases, Faslane workers failed to measure the amount of effluent which leaked or detect the leaks until after the incident."

Campbell Gemmell, chief executive of SEPA, told Nuclear Engineering International magazine that the leakage appears to have been preventable.

"With a civilian operator we would have been having very robust conversations about prohibiting further action until we could see very clear demonstrations of systems and training that would prevent this ever happening again,” he told NEI.