A deal worth up to £500 million ($996 million) for the ongoing operation of Great Britain’s low level radioactive waste site at Drigg south of Sellafield in West Cumbria has added 20 years to the life span of the aging site.

Published on April 3, 2008 by Charles Digges 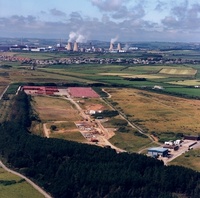 According to Sellafield officials, liquid deriving from Sellafield’s sea discharge plant overflowed from holding tanks into a concrete room designed to contain and deal with overflow incident on Wednesday, Match 19th.

An investigation is underway by plant officials, who said the incident has been classified as Below Scale on the International Nuclear Event Scale.

At Drigg, Britain’s Nuclear Decommissioning Authority (NDA) recently pledged to give Copeland – the borough where Drigg is located – £10 million for having the repository in the borough plus another £1.5 million for each year it continues to operate.

The NDA expects the site to run until 2070 following the award of the lucrative contract to UK Nuclear Waste Management Ltd (UKNWM) for its future management and operation.

“We view this as another example of British authorities missing deadlines in the closure of their older nuclear facilities,” said Bellona executive director and nuclear physicist Nils Boehmer.

The Nuclear Decommissioning Authority (NDA) spent two years considering the five-year contract for the 6 kilometre site. Most of the waste at Drigg comes from Sellafield, But as a national repository, it also takes waste from universities, research institutes and hospitals.

The site was due to close in 2050 but efficiencies engineering techniques for dealing with nuclear waste extend Drigg’s life by 20 years, said the NDA’s chief executive Dr Ian Roxburgh at yesterday’s contract-signing ceremony.

“The new contract successfully delivered will provide major savings of over £100 million while innovative technical proposals aimed at delivering a 20 percent reduction to the UK’s low level waste liability could result in savings of up to £1 billion,” he pointed out.

The contract is also expected by the Cumbria paper, the Whitehaven News, to bring a windfall of jobs to an area that is being hit hard by the economics of scaling down and closing nuclear facilities.

First civil contract for NDA
The contract is valued between £200-500 million and marks the first in the series of NDA competitions for the running of its civil nuclear sites.

The competition to manage and close down the biggest site of all – Sellafield – will be the next to be announced later in the year.

UKNWM is a consortium led by the American giant URS Washington Division, and includes Studsvik, Areva and Serco Assurance.

Roxburgh told the BBC that: "This is a landmark occasion for many reasons. Primarily it is significant because it is through the competition process that we will bring innovation and new expertise to the programme to decommission and clean-up the UK’s nuclear legacy.”

"It is equally important as it means the NDA has delivered the first in a series of multi-million pound competitions" he said.

The initial contract is for a period of five years with the potential of further extension periods, subject to performance and NDA management approval, up to a total of 17 years.

"We believe that in partnership with the NDA, we can make a real difference."