A British Nuclear Group (BNG) official told Bellona Web Friday that last months leakage of some 20 tonnes of plutonium and uranium dissolved in nitric acid at Sellafields Thorp reprocessing plant has been classified as a serious incident on the International Nuclear Event Scale (INES). 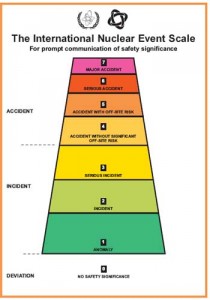 A senior official at the UKs Nuclear Decommissioning Authority (NDA), the government body set up to dismantle radioactive facilities at 20 sites across Great Britain, meanwhile said Sunday that the Thorp plant should be shut down for good.

The INES rating puts the Thorp event at one step bellow an official nuclear accident on the scales seven step rating system. The leak, which released 83 cubic meters of highly radioactive liquid through a ruptured pipe into in Thorps fuel clarification cell, received an INES designation of 3. This rating corresponds to a serious incident on the scale devised by the International Atomic Energy Agency. A rating of 4 corresponds to an accident without serious off-site risk.

The leak was discovered n April 18 during a camera-based inspection to determine why readings for plutonium and uranium levels in one of Thorps storage—or so-called Accountability—tanks were not at levels that were expected. Thorp was immediately shut down so and investigators have convened to determine the cause of the incident.

A rupture in the pipe itself or poor welding connecting the pipe to the tank—investigators are still unsure—coming from one of Thorps two Accountability tanks are the primary suspects for the leak, BNG spokesmen have said.

Still safe despite INES score
Officials with the NDA, which owns Sellafield, and the BNG officials that run Sellafield have repeatedly stated that the leak poses no danger to citizens in the surrounding community or to plant workers—so long as the leak remains contained and they do not enter the fuel clarification cell. Britains nuclear safety inspectorate, the Nuclear Installations Inspectorate (NII) last week confirmed this.

Thorps fuel clarification cell comprises a stainless steel-lined space 60 metres long, 20 metres wide and 20 metres high and its concrete walls are 2 to 3 metres thick to absorb radiation. BNG Sellafields spokesman Nigel Monckton said the cell was designed to withstand the possibility of a leak and, because stainless steel does not dissolve in nitric acid, the leak has been contained.

"There has been no radiation dose to Sellafield workers as a result of the leak and no release of radioactivity into the atmosphere," confirmed a spokesman for the safety regulator, the Nuclear Installations Inspectorate.

What Thorps fuel clarification cell does
Thorps raw materials are the used fuel rods from nuclear power stations. After receipt at Thorp, they are stored for several months to allow the radioactivity of short-lived fission products to decay to safer levels. The 1-metre long, 1-centimetre diameter tubular rods are then cut up into small chunks and lowered in baskets into strong nitric acid.

Thorps future in question
The halting of work at THORP is a mixed blessing for anti-nuclear campaigners because the revenue the plant generates is crucial to the clean-up and decommissioning of the UK’s old nuclear power stations.

Senior sources at the NDA now say that keeping the plant closed is more economical, and is a move that would take reprocessing —which has always been a lightning rod for heated debate—out of the debate over building new nuclear facilities, a direction many believe the government is moving in.

The view is that Thorp should never restart, a senior NDA source said in a telephone interview Sunday.

Officials say that, even while in operation, the plant fails to make money. Figures show that, of a total annual budget of £2.2 billion for nuclear clean-up and decommissioning around the UK, the NDA receives some £1 billion from the commercial operations it inherited from British Nuclear Fuels (BNFL, now known as BNG). Of this, the NDA expects to get between £560m and £640m from reprocessing and transporting nuclear material around the world.

A large proportion of this cash would come from Thorp’s activities—reprocessing spent fuel from British Energy’s nuclear power stations, along with contracts from Japan, Germany and other overseas customers, who are currently disgruntled with Thorps backlog on reprocessing orders. But the NDA also stomachs enourmous costs from Sellafield, which are forecast to be nearly £730m over 2005-2006. Up to three new storage facilities for separated plutonium and uranium are also needed—at a cost of nearly £200m each.

Britain rethinks its position on new generation facilities
The NDA official said that The government is starting to think about new stations.

The view is that it would be impossible to justify a new generation of stations that relies on reprocessing.

Closing Thorp would reduce the time it takes to run down the massive stockpile of liquid spent nuclear fuel containing uranium and plutonium by four and a half years. Nuclear regulators insist that the backlog being dealt with by 2015.

NDA chief executive Ian Roxburgh told the British daily The Observer that a decision on closure would be up to the government. He added that the NDA must produce by the autumn its plans for the 20 sites it operates, including Sellafield. The latest incident had clearly brought that forward.

Sources at British Energy have indicated that the privatised nuclear operator wants to run any new nuclear power stations, but is not keen to take a major investment stake in any projects, The Observer reported. There are doubts over whether private investors have the appetite to finance and build a new generation of reactors, given the volatility of energy markets. British Energy sources believe the operation of new plants should be kept separate from ownership and financing, The Observer said.