The European Union’s executive Commission has renewed calls for tougher EU nuclear safety standards on Tuesday after part of Britain’s Sellafield Thorp reprocessing facility was shut down after a broken pipe leaked 83 cubic meters of a uranium and plutonium solvent into a steel chamber designed for such purposes. 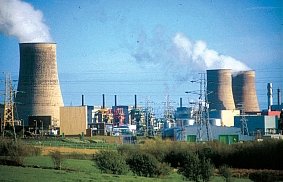 The leak was discovered by UK nuclear officials on April 18th. Officials held a local media briefing in West Cumbria, where the Sellafield complex is located, on April 23rd, but the London Guardian brought the incident more international attention on the front page of its May 9th issue.

The European Commission is trying to push through new EU legislation that would create unified standards on safety at nuclear installations throughout the 25-nation bloc, but has faced opposition from countries such as Britain, Germany and Sweden.

"The recent Sellafield incident shows once more that the EU should be allowed overall framework control for the safety of nuclear installations," Energy Commissioner Andris Piebalgs said in a statement to Bellona Web.

"It is not possible to continue to function efficiently in relation to the varying national legislation in force. In an area as sensitive as nuclear energy, it is essential to show the greatest form of transparency."

The revised rules would require member states to create plans for interring radioactive waste, though a Commission-imposed deadline for those plans was dropped from the proposal to win backing from some sceptical EU governments, many of which joined the EU last summer from Eastern Europe and have their hands full finding waste solution problems for their Soviet-built plants.

The Commission has been at odds with Britain over Sellafield before. Last autumn the EU executive said it was taking Britain to court for failing to grant EU inspectors full access to the storage ponds at the site that store highly radioactive waste.

Thorp clean-up
British Nuclear Group (BNG), which manages Sellafield for Britains newly-created Nuclear Decommissioning Authority (NDA), on Monday confirmed it had shut part of the Sellafield nuclear reprocessing plant after engineers discovered faults in some pipe work in the plants fuel clarification cell. It remains unclear whether the leakage was caused by a manufacturers welding failure or whether there was a rupture in the piping itself, one UK nuclear official told Bellona Web on Monday.

The shutdown of Thorp represents a financial setback to the NDAs overall per annum decommissioning budget. Approximately £2 billion, of which some £560 million would be contributed by the Thorps profits, one British nuclear official told Bellona Web in an interview earlier this week. BNG officials said they could not confirm this figure. Other European news outlets on Wednesday published figures indicating that the clean-up effort at Thorp would cost at least £12m, but BNG has said it is far too early to say how much that effort will cost.

Sellafield’s managing director Barry Snelson, of BNG, said the Thorp plant was in a safe and stable condition.

"Safety monitoring has confirmed no abnormal activity in air and there has been no impact on our workforce or the environment," he said in a statement received by Bellona Web.

On Wednesday, Ali McKibbon, a spokeswoman for BNG who works on the Sellafield site confirmed Snelsons remarks. She said that the clean-up effort was proceeding in three stages, two of which have almost been completed. The overall goal of the effort is to reduce the radioactive inventory of the facility, she said in a telephone interview with Bellona Web.

The first stage, she said was emptying the highly radioactive fluid into buffer storage.

The third stage will consist of recovering the radioactive liquids remaining at the bottom of the fuel clarification cell. This, she said, would be an automated procedure and require none of the robotic technology that Sellafield is a pioneer in developing. She did not rule out that robotic technologies would be sent back into the ruptured pipe, however, so as to determine the precise cause of the leak.

There are no official cost estimates for the clean-up operation at this time simply because we have no idea how long it will take. Anything speculated on in the media is just that—speculation, she said.

Where ever the figure of £12m has come from, it has not come from us, she added.

Norwegian concerns
Wednesdays edition of Norways national Aftenposten carried a scathing editorial on Sellafield. Norway has long suffered from emissions of the radioactive chemical Technetium-99 (Tc-99) along its coastline as the Gulf Stream carries the toxin north along the countrys fishery dependent coast. Tc-99 contamination has been measured as far north as Norways Arctic Spitsbergen Island.

The source of the contamination is Sellafields on-shore liquid radioactive waste tank, which until Spring, 2003, released its contents into the Irish sea. The liquid waste underwent substantial cleansing, but Tc-99 remained the most prevalent toxin released on the plants thrice yearly dumping schedule.

After years of appealing to the British government to employ a cleansing agent called tetraphenylphosphonium bromide (TPP), Bellona finally scored a victory in February 2004 when British officials finally agreed to a trial of the chemical. Trials showed that TPP reduced Tc-99 discharges by 95 percent. The technology is now being employed on a permanent basis by Sellafield.

But opinion makers at Aftenposten were aggravated by yet another incident at Sellafield.

For Norway and other of Great Britains neighbouring countries, the accident is an unpleasant reminder that Sellafield is a constant threat to our environment, wrote Aftenpostens editors.

Technetium is and will be a foreign substance in our nature, and there is no logical boundary that it will spill out now that they have found cleaning technology. This is what the UK took to be sense.

The editorial went further to criticise defenders of nuclear power as a possible alternative that would head off greenhouse gas emissions. Atomic energy has again been forwarded as a non-polluting energy source because it doesnt contribute to greenhouse gases. The latter is correct, The former is not. The pollution just happens in another way, and it can become expensive to avoid it. Atomic energy is no solution, neither to energy crises nor to global warming.