SELLAFIELD, England—The British nuclear industry has just taken the first step to undergo its biggest shift since its post war effort to develop the atom bomb in the late 1940s. That effort involves, by and large, the decommissioning of those facilities at sites that were designed to manufacture Britains nuclear capability in the first place.

Published on April 4, 2005 by Charles Digges

By a 2004 order of the British Governments Department of Trade and Industry, the Nuclear Decommissioning Authority (NDA) came into existence on Friday April 1st, and ownership of the UKs main nuclear sites, including Sellafield and Dounreay were passed into the new organsation. It will now be the NDAs job to contract out clean-up operations for those sites at the most cost effective dividend for UK taxpayers

Many facilities at these sites, most notably Sellafield—where Britains post war effort to develop the bomb began—are approaching the end of their engineered life spans, and cannot simply be knocked down. They must be meticulously decommissioned, a processes that has already started at many of Sellafields aging sites and is a process that could take some 100 years. 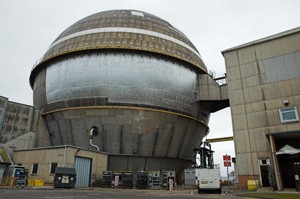 Future employment cuts
Come 2008, BNG will be but one of many contending potential international contractors, like Cogema, Lockheed, Serco and Bechtel to continue decommissioning work at Sellafield. BNGs information officer Stephen Stagg speculated that by 2008, companies like these will be included in the bidding process, but that whether they will work onsite at Sellafield will be left to the discretion of the NDA. This could imply management changes at the top, said Stagg.

But an interview with Derek Simpson, general secretary of the Amicus trade union that that Sellafield workers belong to predicted higher long term layoffs in an interview with the BBC, from a current 12,000 permanent staff members to 4000 by 2011.

Amicus has also called for permanent staff to be retrained to carry out the decommissioning work and plans to oppose the outsourcing of any core work.

"We need to maximise the number of job opportunities available through the decommissioning process by re-skilling Sellafield workers, he told the BBC.

"Unless we start training people now, we are in danger of damaging the whole of UK manufacturing and disadvantaging Sellafield workers and the whole Cumbrian economy. Amicus is committed to maintaining our members’ terms and conditions at Sellafield—ensuring that pay and pensions provision are not threatened by the outsourcing of work."

The government has pledged to create "high quality jobs" to replace those lost during and after the decommissioning process at Sellafield the BBC reported.

Bellona Web interviews on the ground with BNG workers on the Sellafield site confirmed that they viewed the coming of the NDA as more a cosmetic and management related than ground shifting. But if Amicus Stimpson is correct, the bulk of these workers will face unemployment lines unless drastic measures are taken.

BNG public relations officer Stagg, a BNFL veteran of more than two decades, was not so sure how the employment situation would change.

Certainly, I hope that BNG will remain among the main contractors at Sellafield for continuitys sake, he said. He envisioned a situation after 2008 in which several contractors would be bidding and eventually working on various decommissioning projects but whether these contractors will be on site will be at the discretion of the NDA.