Testing of a new treatment process based on a chemical called tetraphenylphosphonium bromide, or TPP, launched last autumn is proved to be successful in limiting controversial discharges Technitium-99, or Tc-99, from Britains Sellafield nuclear facility. 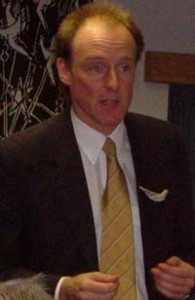 Last Friday the discharges of Tc-99, and possible cleansing methods, was discussed during a conference in Lonodn, organised by the Bellona Foundation, and Norwegian NGO Lofoten against Sellafield. The results of the TPP testing obtained thus far show that 95 percent of radioactive Tc-99 is cleansed from the facilitys discharges into the Irish Sea. A final decision on the long-term application of the TPP process will be made this spring.

The definitive answer will come when the analyses of the test TPP treatments are completed in March or April, but signals from the Britain’s Environment Agency, or EA, are solely positive. In Bellonas opinion there is a reason to be very optimistic.

The dumping of Tc-99, from Sellafield’s nuclear reprocessing plant has caused frustration and outrage in Norway. The discharges in recent years have led to a dramatic increase of Tc-99 among Norwegian coastal sea products such as lobster and seaweed. Tc-99 has also been measured in the Barents Sea as far north as the Arctic island of Spitsbergen.

Sellafield’s liquid radioactive waste is stored in an onshore holding tank. Until last spring, the contents of the tankwhich were cleansed of almost all toxic substances except for Tc-99were being slowly dumped by portions into the Irish Sea three times a year, with the goal of emptying the tank completely by 2007.

A Success so far-but still no Champaign
The high expectations for the experimental TPP treatment were founded on a presentation at the conference by Andrew Mayall, Sellafield Team Coordinator, who spoke of The Environment Agency’s regulation of Tc-99 at Sellafield and an update on the TPP trial.

He catalogued the EAs working sphere and Sellafields recent discharge history. Mayall has previously referred to early results of the TPP cleansing trial as promising.

Mayall said that TPP trials seemed to clean Tc-99 in a satisfactory way, and that they had not experienced any obstacles or failures during the processing. He referred to the cleansing level as significant, but he also urged the supporters of the process to wait to uncork the Champaign until the final results of the testing come in March or April.

We are reasonably sure that the conclusion will be that the cleansing of technetium-99 or the TPP process will be taken into use, said an optimistic Frederic Hauge, the president of The Bellona Foundation.

In 2003, the total discharge from Sellafield a level of 35TBq to 34TBq was released before the dumping moratorium was put into force. During the test period 34TBq are cleansed down to 1TBq. This means that the cleaning efficiency is 97.5 percent. This means that the total amount of Tc-99 which will be released form the tanks the coming years, could be reduced form an projected amount of 240 TBq to about 6 TBq, Hauge said. 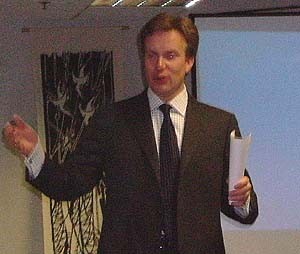 Hauge expressed gratitude that BNFL, or British Nuclear Fuelsthe company that runs Sellafieldand British authorities at last had listened to the concerns of people living in Norway and other Nordic countries, and started to clean out Tc-99 from the discharges.

The fact that BNFL started to search for solutions for Tc-99 on its own initiative and had not waited for the authorities to oblige it to do so shows the responsibility, Hauge said.

In conclusion to his remarks, Hauge together with Lofoten mot Sellafield invited representatives from BNFL to Lofoten in April, when the full results of the cleansing where in, to go on a fishing trip and catch some clean fish.