Atomic energy giant British Nuclear Fuels, or BNFL, on Wednesday announced a loss of more than £1 billion for the last fiscal year, blaming the high cost of decommissioning nuclear power plants and persistent technical problems at the companys controversial Sellafield reprocessing plant for its financial beating.

Published on July 9, 2003 by Erik Martiniussen 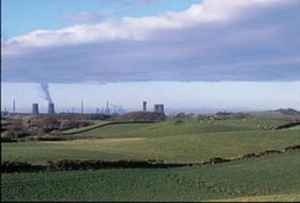 Last week Patricia Hewitt, British Secretary of State for Trade and Industry finally abandoned plans to partly privatise ailing reprocessing and clean-up firm BNFL because of its consistent record of losses, meaning the company will remain under the financial wing of the British government.

According to the British newspaper The Guardian, Hewitt told the British House of Commons that privatising the group was no longer an option. Her predecessor, Stephen Byers, had postponed last years plans to privatise 49 percent of BNFL after issues of deficient quality control and poor management at the state-owned company were made public and erupted in scandal.

Clean-up Activities Driving Up Costs
Nuclear clean-up activities at Sellafield and other sites have kept BNFLs accounts in the red. During the previous fiscal year, BNFL reported a whopping £1.9 billion loss, the largest in the companys history. All of this is having catastrophic results for the companys bottom line, and there seem to be no signs of improvement in sight.

The company is also between a rock and a hard place in terms of its duties. Over the last three years, BNFL shut three nuclear power plants that were far beyond their engineered age limits. But now the plants must be decommissioned, and last year decommissioning costs skyrocketed by £415 million.

Adding to these woes are the companys unrelenting technical problems with Sellafields celebrated Thermal Oxide Reprocessing Plant, or THORP. The THORP plant separates uranium and plutonium from spent nuclear fuel, but repeated delays in its reprocessing activities lead to increased economic losses and are a constant annoyance to BNFLs customers.

Two years ago, the British paper The Independent reported that all of BNFLs foreign THORP customers threatened to cancel their contracts with BNFL. German and Japanese companies, firms in Switzerland, Holland and Italy, all warned BNFL that they could cancel contractswhich would have lost BNFL £6 billion. In all those cases an agreement was reached. But BNFLs current difficulties are adding up to a new confrontation.

This year German power companies have again threatened to cancel their contracts with Sellafield. Among the companies considering turning their back on Sellafield is Germanys largest nuclear company, Eon Energie AG, Nuclear Fuel, an industry magazine reported recently.

BNFL Still Optimistic
In a press release Wednesday, the ever-optimistic BNFL Chairman Hugh Collum commented on the grim financial state of his company.

The last year was certainly demanding for BNFL, but it was one in which further progress was made in laying the ground for the companys future development. We have maintained the momentum established in the past three years, completing a reorganisation that now aligns our worldwide business, he said in his statement.

Collum said that Hewitt recently announced that the government and the board of BNFL had agreed to conduct a joint review to evaluate options for alternative strategies for BNFL.

The Government has decided that a flotation privatisation of the company should no longer be an option. Going forward, our focus will be on developing a strategy which will allow us to become a key player with a successful future in the nuclear industry and in particular the competitive clean-up market in the UK, Collum said.

Changes in BNFL
Earlier this year the British nuclear industry was left reeling by the resignation of BNFL chief executive Norman Askew, regarded by many as the sectors most effective communicator and most prominent figure. Michael Parker, the former head of Dow Chemical, will succeed Askew. He will take over beginning in August, BNFL said.

Over the next few years BNFLs central role in nuclear waste clean-up issues will diminish as the British government introduces a so-called liabilities management authority, or LMA, which will take over BNFLs waste management responsibilities. According to the recently announced plan, the LMA will take over the enormous clean-up costs so that BNFL is spared from dealing with the £40.5 billion price tag of mopping up its own mess. Instead, British taxpayers, through the governments subsidisation of LMA, will bear the brunt of nuclear waste eradication.