British Secretary of State for Environment, Food and Rural Affairs Margaret Beckett has promised that Great Britain will stop the discharges of radioactive technetium 99 at the Sellafield reprocessing site. Making deeds follow words, the minister addressed Sellafield directly, demanding that it halt all Tc-99 discharges for at least nine months.

Published on June 22, 2003 by Erik Martiniussen 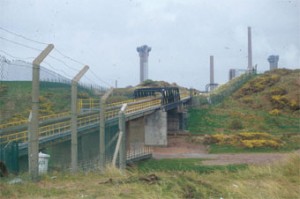 The regular discharges of radioactive technetium 99, or Tc-99, from the British nuclear reprocessing concern have long been a point of vehement dispute between England and its European neighbours Ireland and Norway, the harshest critics of Sellafields expulsions. Norway, specifically, has repeatedly protested against the significant levels of this element found in its lobster and seaweed yield.

But in a letter sent this week and addressed to Sellafield’s operator, British Nuclear Fuels, or BNFL, Beckett finally requested a nine months’ halt in all Tc-99 discharges, while new technologies are developed that would help decrease to the minimum the levels of this element currently dumped by the Sellafield site into the Irish Sea.

The Incredible Decision
The suggestion to impose a one-year moratorium on Sellafields Tc-99 discharges was worked out by Bellona during a joint conference with BNFL and Norwegian non-profit organization Lofoten mot Sellafield at Sellafield in April. Following the conference, Norwegian Minister of the Environment Børge Brende offered the idea to the former British environment minister, Michael Meacher, at a meeting in May.

Commenting on Britain’s decision, Brende said: Ive had many tough talks with British ministers about this. That there finally is some progress in this case gives me an incredible feeling.

In December last year, the UK government had announced it would consider imposing a moratorium on all Tc-99 discharges from Sellafield, but Britain’s private Environment Agency appeared skeptical about the decision and advised British authorities against it, making it difficult to find a practical solution that would satisfy all involved parties. The suggestion for a moratorium was developed as a diplomatic key to find an acceptable way out of the tangled Sellafield case.

A Constructive Policy
One of the most important implications that the decision announced recently by the UK will have is that Sellafield will already have to cancel the scheduled discharge of 30 terrabecquerels of Tc-99 slated for this September. Instead, BNFL and the Environment Agency will have to work hard to develop a technology that would help reduce the remaining stockpile of medium-level Tc-99 currently in storage at the Sellafield site.

In a letter to Beckett earlier this year, the Environment Agency again called a moratorium on Tc-99 discharges not constructive. Now the agency is presented with a constructive task to find the best way to clean the Tc-99 stockpile without having to resort to such an environmentally perilous option as discharging the radioactive waste into the Irish Sea.

BNFL has done research on the use of such option as tetraphenylphosphonium bromide, or TPP, as a possible means to cope with the Tc-99 problem. This purification technique involves adding the precipitation agent TPP to the liquid waste resulting from Sellafields operations. This process yields a precipitation product, which can be cleaned out by already existing standard filters, and then cemented and stored as intermediate-level waste.

Another solution would be to upgrade Sellafields storage facilities or build a replacement facility for safe and secure storage of the sites dangerous waste.