Unusual high concentrations of uranium-238 in one of the Sellafield evaporators have delayed BNFLs plans to convert radioactive liquid waste to solid waste.

Published on April 8, 2003 by Erik Martiniussen 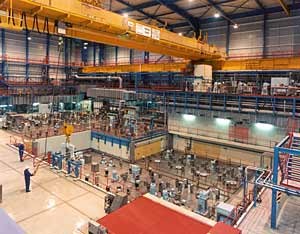 Arising from reprocessing
The delays made it impossible form BNFL to meet the proposed date of 31 March 2003 for the diversion. Instead BNFL had to repeat a stage in the commissioning process, before the process could get approval from the Health and Safety Executive (HSE).

There is currently no agreement from HSE to proceed with MAC diversion, but nor can there be until BNFL have completed successfully all of the stages of the commissioning process.

The MAC-diversion plan involve the conversion of all MAC arising from Magnox-reprocessing to solid waste, which then can be stored in steel containers pending future deposition. Today MAC is discharged to the Irish Sea through EARP purification plant. Though EARP does clean out most of the other nuclides, it does not clean out Tc-99. Put into operation in 1964, the Magnox-reprocessing plant is by far the oldest of the two plants at Sellafield. The second reprocessing plant at Sellafield, THORP, commenced operation in 1994. Depending on the fuel burn-up, reprocessing of Magnox fuel generates between 20-30 TBq of Tc-99 annually. In comparison, the annual discharge of liquid Tc-99 waste from THORP is about 1 TBq. Hence MAC-diversion is part of a plan to reduce Tc-99 discharges.

Angry minister
BNFL do intend to implement MAC diversion, but it is still not clear when the process will be operational. BNFL says the sample result and the subsequent requirement to wash out and restart commissioning has led to a loss of a minimum of four weeks on the programme. 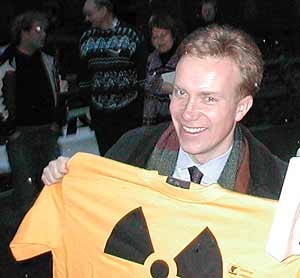 This has led to frustration in the Norwegian Ministry of Environment. In December the UK Government announced it would consider to put a moratorium on all the Tc-99 discharges from Sellafield. But more than three moths later the Environment Agency has apparently still not received any direction to explore the possibility of a moratorium. In March this year yet another batch of Tc-99 was discharged into the Irish Sea from backlogs of historic waste.

Now the Norwegian Minister for the Environment, Mr Børge Brende, is getting increasingly impatient. Monday last week Mr Brende once again wrote a letter to his British counterpart, regarding the moratorium.

Mr Brende wrote: Future delay of the process to implement a moratorium could easily leave the impression that the UK strategy is simply to postpone the final decision as long as possible, while the remaining volume of Tc-99 is steadily discharged to sea.

The Norwegian minister is also asking for a meeting with Mr Meacher in London as soon as possible.

Delayed moratorium
The Bellona Foundation has argued that a moratorium has to be introduced at once. But the British Environment Agency has a different opinion. In their response to the ministers, EA has written: ..a moratorium on MAC treatment pending future TPP investigations does not seem to us to be a constructive way forward that would lead to a viable means of treating MAC in store to remove Tc-99....

While British officials are talking about how to deal with a possible moratorium, BNFL has started to wash out the evaporator, which cause the MAC-diversion problems. The B268 evaporator has been shutdown, washed out and restarted using a different method. Further work is now underway to investigate the impact of the high uranium concentration on the evaporator and the quality parameters.

With no further significant delays to the programme BNFL still believe it will meet the proposed date (the end of financial year 2006/07) to process the historic MAC liquides currently stored in B211. This would mean the discharge of at least more than 200 TBq Tc-99 to the Irish Sea.

This April, Environmental Foundation Bellona, BNFL, and Norwegian NGO Lofoten mot Sellafield will arrange a conference at Sellafield regarding the Tc-99 discharges.