Bellona calls for a one-year moratorium on Tc-99 discharges

In a bid to address the concerns of technetium-99 (Tc-99) discharges into the Irish Sea associated with active waste liquors from reprocessed Magnox fuel — which are evaporated to form medium active concentrate (MAC) — the Bellona Foundation joined with British Nuclear Fuels Limited (BNFL) and Lofoten mot Sellafield in organising a conference near the Sellafield plant April 21st-23rd. 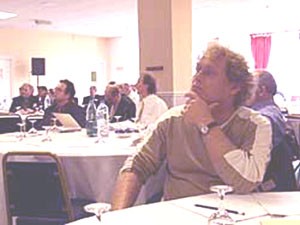 One potential process to remove some of the Tc-99 from MAC when it is treated is the addition of the chemical Tetraphenylphosphonium bromide (TPP). BNFL has not obtained permission from the UK regulators due to a number of significant problems involving waste management and the toxic potential of TPP in the marine environment.

Bellona believes that TPP abatement technology is one of the best available technologies to treat Tc-99 and a one-year moratorium should be placed on Tc-99 discharges pending a plant trial as well as an evaluation of other methods to stop the Tc-99 releases, Bellonas Frederic Hauge said at the conference.

Speaking at the conference Andy Mayall from the the Environment Agency (EA) Nuclear Regulation Group (North) said: while it is generally agreed that the impact of Tc-99 is low, we recognise the UK and international concerns about Tc-99 discharges. That is why the EA has required BNFL to take steps to reduce discharges.

However, Mr Mayall, when questioned by Bellona Web Wednesday, said that the TPP method is associated with a number of problems.

"TPP is an organic complexing agent which could have an effect on the solubility of other radionuclides in deep back-filled repositories", Mr Mayall said.

"Tc in oxidation state VII is very mobile and would be very difficult to contain in a disposal site, in addition its presence could alter the assimilative capacity of a deep repository and change the composition of the other radionuclides which could enter the ground water."

Double standards employed
But the decision to discharge Tc-99 to sea while it is not suitable to be disposed in a deep back-filled repository has lead to the belief that double standards are being employed.

In an interview with Bellona Web Wednesday, Ingar Amundsen, Advisor at the Norwegian Radiation Protection Authority, said: the two separate criteria for land and sea disposal is a paradox because of the strict regulations for land storage compared to discharges to sea.

The radioactive dose from Tc-99 to critical groups after 50,000 years is still lower than the current dose arising from discharges to sea, Mr Amundsen continued.

Historic MAC chemically incompatible
There have been repeated calls for the historic MAC from the B211 storage facility to be vitrified rather than discharged to sea.

But According to John Clarke, Head of Environment, Health, safety and Quality at BNFL, who spoke on Tc-99 discharges from Sellafield, stored MAC cannot be sent to vitrification because it is chemically incompatible.

This is because historic MAC has a high salt and iron content due to repeated evaporation processes, although this problem may be solved by gradually blending historic MAC into the continuous stream of MAC diverted to vitrification.

One problem associated with directing historic MAC to vitrification is the need for B211 to remain in operation for at least ten years which raises safety concerns.

One idea debated at the conference is the building of a new MAC storage facility to replace B211. But according to BNFL this would cost £200m-£300m and take around 7 years to commission and delay the emptying of the tanks at B211.

The EA suggests that the construction of a new plant would be grossly disproportionate to the likely benefits and would not address the concerns expressed by the Health and Safety Executive and Nuclear Installations Inspectorate about the continued safety of B211.

Speaking at the conference, Bellonas Frederic Hague said: I find it hard to believe that historic MAC cannot be sent to vitrification although I realise historic MAC diversion is a slow process and would therefore prolong the life of B211.

But I find the cost argument against the building of a new storage unacceptable, given the possibilities of huge financial losses to the Norwegian fishing industry due to the psychological impact that Tc-99 has on consumers of marine products, he continued.

Given that it is technically feasible to do so, historic MAC should be diverted to vitrification and stored on land rather than being dumped in the Irish Sea, Mr Hauge concluded.

A successful conference
The remainder of the conference provided an opportunity for research and information on Tc-99 discharges to be exchanged and different views debated among the 70+ British, Danish, Icelandic, Norwegian and Russian delegates.

Many of the delegates raised the issue of limited employment opportunities for coastal fishing communities who are deeply concerned by the discharges of Tc-99 from Sellafield and the impact this will have on their livelihoods if marine products are perceived to be unclean.

Moreover, many delegates urged BNFL to introduce a one-year moratorium on Tc-99 discharges to sea while TPP is modified to treat historic MAC from B211. And these delegates also want to see all available abatement options examined and TPP tested in a plant trial.