Vis menyen
Bellona.org > Latest News > Nuclear issues > Nuclear Russia > By Bellona’s measure, Russia’s Year of Ecology might not have been such a flop

By Bellona’s measure, Russia’s Year of Ecology might not have been such a flop

As Russia’s Year of Ecology ended on December 31, and the Kremlin’s year-long drive to put environmental issues first in 2017 drew to a close, assessments of the effort given by Russian observers called it out for being what most have come to expect of Moscow: a cynical joke.

Published on February 20, 2018 by Charles Digges

As Russia’s Year of Ecology ended on December 31, and the Kremlin’s year-long drive to put environmental issues first in 2017 drew to a close, assessments of the effort given by Russian observers called it out for being what most have come to expect of Moscow: a cynical joke.

But behind the turgid speeches, the signing of decrees and a procession of hand-wring politicians paraded across national television screens, all designed to give the appearance of furious action and deep resolve, a few small but salient things occurred that mark the year as not a complete failure – and Bellona was at the center of them all.

Granted, complete failure is not a high bar to cross. But in an atmosphere where Vladimir Putin’s near monarchy has done its best to kill organizations bearing good ideas about how to improve Russia’s environment, even the small things are worth celebrating.

And though these things hardly fall on the to-do list that the Kremlin bureaucracy set for itself as it invented yet another year of distraction and, like the Soviet five-year plans of yore, outlined a set of goals it could blame low-level bureaucrats for not reaching, they nonetheless mark a few important milestones in cleaning up messes and sparking innovation that have for too long been off Moscow’s map.

What’s important about these landmarks is that they were reached without much attention from the Kremlin. They weren’t a part of Putin’s big plans of reigning in garbage or encouraging biodiversity or the formation of commissions to organize committees to study theses issues – none of which happened anyway.

Instead, they emerge from the momentum created among mid-level officials, local governments, concerned businesses and a Norwegian environmental organization called Bellona.

As Putin, who has been in power as long as Brezhnev, plods toward another certain victory in next month’s presidential elections, it bears remembering that this momentum exists despite him – and will continue to exists when a rigged vote gives him another six years in office on March 18.

So, with that, here’s a brief list of what Bellona helped get done last year in Russia just by taking Moscow’s Year of Ecology more seriously than Moscow did.

This little know corner of the Russian Arctic became a dumping ground for the radioactive innards of the Soviet nuclear submarine fleet in 1961. Over the next quarter century, some 22,000 spent nuclear fuel assemblies were massed at the site until the Soviet Navy decided to close it down for business – without any thought of how to contain the radioactive contamination that was sure to come along.

In 1982 it did. A spent nuclear storage facility at Andreyeva Bay, now notoriously known as Building No. 5 – started leaking and threatened to dump a stew of plutonium, uranium and other fission products into Litsa Fjord, only 50 kilometers from the Norwegian border, fouling the Barents Sea. 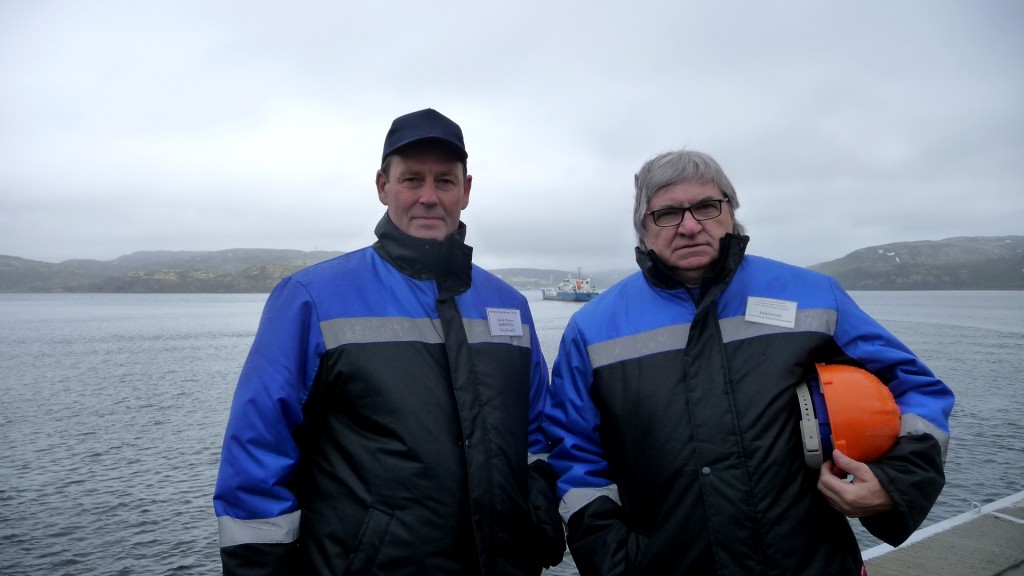 Technicians at Andreyeva Bay rushed the nuclear fuel, much of it damaged,
into temporary containment, stuffing three buildings at the site full of fuel assembles and cementing them in. Over time, that slap-dash effort became permanent. Still other fuel was stored unshielded from the harsh arctic elements out in the open air. The conditions of neglect led many experts to fear that the radioactive morgue might spark an uncontrolled chain reaction and explode.

This slow-motion nuclear disaster continued to unfold in near secrecy until Bellona brought it to international attention in a report it published on Northwest Russia’s nuclear woes in 1996. Moscow was not thankful for the limelight, and for five years after, Bellona battled treason charges leveled by Moscow against one of its own, Alexander Nikitin – who was finally acquitted in 2000.

But Bellona continued unfazed, and drew together the resources of the Norwegian government and a dozen other countries besides, and in 2017, the first of some 3,000 loads of old nuclear submarine fuel began leaving Andreyeva Bay, first by sea and then by rail to more controlled and environmentally secure storage. It only took 27 years, but Bellona was there for each of them.

The Kola Mining and Metallurgy Company

Norilsk Nickel, one of Russia’s most polluting industrial giants has since World War II maintained some of its smelting works on the Kola Peninsula at the Kola Mining and Metallurgy Company. Through the fall of the Soviet Union, the chimneys of these ancient industrial facilities have choked Northwest Russia and neighboring Northern Scandinavia with lethal sulfur dioxide in quantities that Russian officials have continually sought to obscure 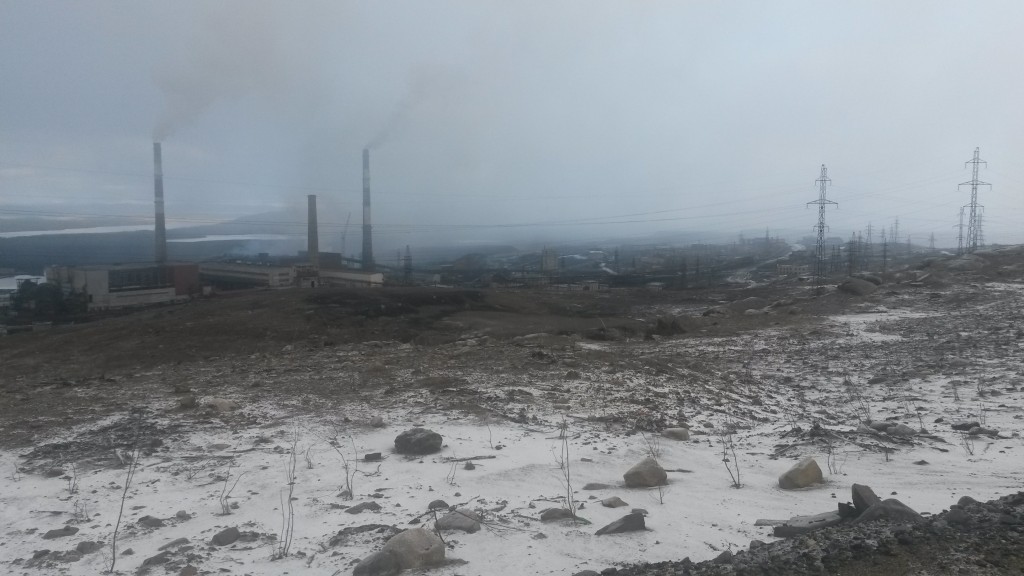 That has often given rise to colorful scuffles. On one occasion, frustrated mayors from Northern Norway attempted to file charges with the police against Norilsk Nickel and Norwegian activists urged the EU to impound the yacht of the company’s billionaire CEO, Vladimir Potanin. On the Russian side of the border, phony nonprofit groups peddled bogus pollution figures to claim the company doesn’t pollute at all.

But the cross border battle over the Kola facility’s emissions has gone through darker passages. In 2016, the company was caught bribing an environmental prosecutor so he would jigger their emissions levels down to the legal norm. The previous year, a report Bellona published on industrial pollution landed it on Moscow’s foreign agent list, subsequently forcing it to close.

There seemed to be nothing that could bring any accountability a company that was once fined a mere $500 for polluting an entire river in Siberia – and even less to suggest it was interested in mending its ways. 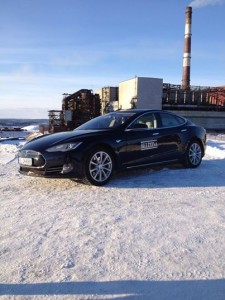 Bellona parks its Tesla near the industrial facilities in Nikel on the Kola Peninsula. (Photo: Bellona) Credit: Bellona

But in about 2014, something began to change. The global rise of electric cars, and and their ecologically-conscious makers, began demanding that the materials used for making their batteries come from environmentally conscious sources – a direct threat to Norilsk Nickel’s polluted bottom line.

Bellona President Frederic Hauge reminded the Kola polluters of this during a highly publicized electric car trek from Oslo to Murmansk, when he challenged the company to refine its ores in a way that Tesla would buy.

Suddenly, Potanin announced he wanted to spend $17 billion on environmentally upgrading his company’s pre-war smokestacks, a $ 2 billion a year plan that would slash sulfur dioxide emissions at the Kola Mining and Metallurgy Company by 90 percent under its 2015 levels by 2023.

For much of last year, Norilsk Nickel kept how it planned to do that close to its vest, and rebuffed inquiring environmentalists who wanted to know the particulars of the company’s new approach. But by October, Norilsk Nickel began to dismantle some of its culture of silence by inviting Bellona to attend its environmental conference in Krasnoyarsk.

The company also posted some of the sharpest emissions reductions it had ever produced in 2016. At the Kola facility alone, sulfur dioxide emissions dropped by 20 percent over the previous year.

There is yet much to be known about how the company will continue on this road, but it might have been an electric-car crazy Norwegian who cast the first pebble in what  could be an avalanche of change.

And  electric car highway from Norway to Murmansk

On thing Hauge noticed when he pulled into the Park Inn hotel in Murmansk in 2014 was that the only way to charge his Tesla was by installing a special cable at the hotel.

Last year that changed when Bellona built an e-car charger at the hotel that lets drivers charge their cars for free.

But what began as a hopeful publicity stunt is gaining traction: by the hotel’s accounting it has served a few e-car tourists from Western Europe who were looking for a place to charge up.

That may not seem like much. But as Hauge found back in 1987 when he was motoring around Norway in a squat, boxy electric car he’d driven across the border from Sweden, electric car infrastructure – and a little stubbornness – is everything. Thirty years later, more than half the cars sold in Norway are electric or hybrid, and Oslo is on the road to cutting out gas driven cars altogether by 2025.

The point is that it’s worth starting small. And while only about 1,000 electric cars were registered in Russia last year, their drivers are starting to stand up for their rights. In December, just before Year of Ecology ended, e-car drivers out in Vladivostok staged a protest demanding public charge stations in their city.

It’s a right they are, in fact, guaranteed by a Russian decree from 2015, which demands every gas station across the country’s 11 time zone upgrade to include e-car chargers on their premises. Enforcement of the law has been lacking – but when officials get around to fining laggards, the explosion in charge stations could keeps up with Russians’ demands: E-car sales there ticked up by three and a half times in 2016 over the previous year.

Back in Murmansk, Bellona has been working with local officials to improve that charging infrastructure on the roads between Russia and Norway. In November the Murmansk city government, a number of Russian energy firms and Bellona signed on to a memorandum of understanding that would put charging stations at each of Scandinavia’s border points with Northwest Russia – encouraging western motorist not to pollute the country they are visiting.

There’s a lot of red tape to be shorn away on the Russian side of the border, and it needs bolder legislation to encourage an e-car boom. But that’s where Norway, the e-car capital of the world, was back when Hauge owed the country’s only electric car.

Russia could get there in the next three decades if it keeps chatting with Bellona – whether Putin is still in power or not.