Loading of nuclear fuel will commence in the first quarter of 2017, according to the news agency RIA Novosti. 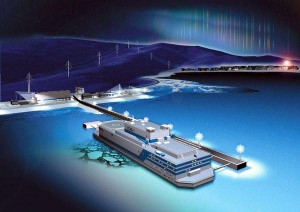 A mock up of the Akademik Lomonosova in Port. (Photo: http://www.okbm.nnov.ru/russian/lomonosov)

Mooring trials have started for the world’s first floating nuclear power plant. The trials are planned to be finished by the 30th of October next year, after which the floating NPP will be undocked and ready for transport. Loading of nuclear fuel will commence in the first quarter of 2017, according to the news agency RIA Novosti.

The prototype, “Academian Lomonosov”, will be sent to the harbor-city of Pevek from the Baltic shipyard in St. Petersburg. The route will take it from the Baltic Sea, along the Norwegian coast, through the Barents Sea and further along the Northeast Passage to the Chukotka Autonomous Okrug. The floating NPP will secure the energy needs of the region, replacing the Bilibino NPP, which is projected to close in 2019.

The state nuclear agency, Rosatom, plans for the floating NPP to be in place in September of 2019 and ready for tests and power production sometime during autumn the same year.  The power plant will be able to produce a maximum electrical output of 80 MW, with two KLT-40S reactors with a capacity of 150 MW/h each. The cost of the project is estimated to be 21, 5 billion rubles (€297 million).

According to Aleksandr Niktin, chairman of the Environmental Rights Center (ERC) Bellona in St. Petersburg, the floating power plant is a way for the nuclear industry in Russia to create interest in the opportunities that lie in new technology within their field of work.

“But, at a glance, this prototype will have very limited usefulness when it is completed,” says Niktin. “When the idea was first coined, Rosatom hoped that it might attract foreign investors and customers, which would lead to greater revenue. “

“The project has taken far longer to complete than originally planned and it has become a lot more expensive than projected. This has not exactly sparked the interest of foreign investors,” Nikitin remarks.

For more information on the ever-growing budget for the construction of “Academian Lomonosov”, have a look at this article on Bellona web.