MURMANSK – The director of the Kola Nuclear Power Plant (NPP) announced that the station’s aged two first reactors are up to contemporary safety standards and that their engineered operational lifespans should be extended by another 15 years, representing a second resuscitation for both. 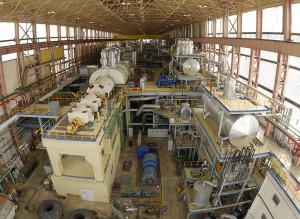 MURMANSK – The director of the Kola Nuclear Power Plant (NPP) announced that the station’s aged two first reactors are up to contemporary safety standards and that their engineered operational lifespans should be extended by another 15 years, representing a second resuscitation for both.

He meanwhile announced that engineering drafts for building the Kola NPP 2 are in full swing.

The Kola NPPs first two reactors went into service in 1973 and 1974, respectively. Both reactors were designed for 30 years of use, and so are already operating on borrowed time. The new extension would have them in operation for another 15 years after 2018 – coinciding with the expiration of the first reactor’s engineered life cycle.

“Today, we are proceeding full steam to implement the preparation of a program extending the life cycles of the first and second reactors,” said Vasily Omelchuk, the Kola plant’s director and deputy general director of Rosenergoatom, Russia’s nuclear utility, to a visiting delegation of International Atomic Energy Agency (IAEA) officials. “Decisions about adopting an investment plan for their extension have already been taken, and during the first half of 2015 we will go through the procedures of adopting a final decision – the technical viability of the extensions has already been shown and proven.”

“It is disheartening that the lifespans of the two oldest reactors at the Kola NPP could be prolonged for 15 years,” said Bøhmer. “These reactors are already classified as two of the most dangerous in the world.”

Omelchuk said a massive reconstruction and retrofitting of the reactors had occurred between 1991 and 2005, which he insisted brought them into accord with new nuclear safety demands and norms allowing for their extended use.

These reactor upgrades were implemented in part on foreign donations. Since 1994, some 1,130 measures have been undertaken to improve the reactors’ safety. Following the Technical Assistance to the Commonwealth of Independent States (TACIS), program, and the European Bank of Reconstruction and Development (EBRD) the third biggest donor to the safety upgrades was Norway, which sunk some $15 million into the endeavor. In total, of the $718 million invested in the safety project, $96 million came from foreign sources.

“By allocating this money, Norway was invested safety upgrades to the Kola atomic station,” said Bøhmer. “No one expected that, thanks to foreign funding, the KNPP would extend the lifespans of its oldest reactors.”

But Omelchuk said that the project envisioned in the investment project anticipate bringing the reactors up to contemporary safety standards, he told the RIA Novosti official news agency (in Russian).

“According to quantitative indicators of reliability and safety, the first and second and third and fourth blocks are identical,” Omelchuk told the agency. “We hope and think that we are implementing an extension program for the first and second reactors where by their lifespans will total 60 years, including the 15 years from 2018.”

Andrei Zolotkov, director of Bellona Murmansk, said the extended lifespans to be handed out were basically predictable.

“Construction preparation for substitute power facilities in recent years were barely conducted, which indicated a high probability that the lifespans of the 45-year-old reactor would be extended,” said Zolotkov.

“It’s worth recalling that in 2011 they conducted the necessary tests fundamental to running the [Kola NPP’s] No 4 reactor at 107 percent its capacity, which was confirmed by an order of RosPrirodNadzor [Russia’s Environmental and Natural Resource Usage oversight agency] in September of 2012,” Zolotkov added.

Zolotkov added that the plant only needed to be running three of its four reactors, as the plant currently produces an energy redundancy of some 500 megawatts in the energy-replete Murmansk region.

Omelchuk also said the engineering blueprint for the construction of the second Kola Nuclear Power Plant would be completed within this year. The search of a site for the plant is currently underway.

“Last year, citing work was renewed for the search for an appropriate location for the plant, and this work will on the whole be completed this year,” Omelchuk told RIA Novosti.

Omelchuk said the site of the new plant would be near the old, and was essentially decided upon during Soviet times. However, in 1994, construction plans where shelved as a result of plummeting industrial production and energy demand on the Kola Peninsula.