The Japanese government’s powerful lower house of Parliament passed a stiff new secrecy bill that would visit harsh penalties on bureaucrats who leak information, and reporters who seek it – a move environmentalists fear would allow official collusion and corruption of the kind unearthed during the Fukushima Daiichi nuclear disaster to flourish.

Published on November 29, 2013 by Charles Digges 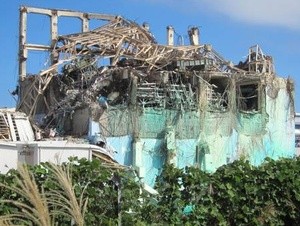 The ruling block and its supporters hope the weaker upper house will pass the legislation next month, the Associated Press reported.

This, according to the Japanese press, will likely include information on the vulnerability of nuclear power plants – a keen area of interest to most Japanese and countries that surround it after the March 2011 Fukushima-Daiichi nuclear disaster which forced some 160,000 from their homes, and from which radioactive water continues to leak.

Apparently, frustrated that it can’t stop the leaks at Fukushima Daiichi, the Japanese government is taking a crack at stopping the leaks about the leaks. And officials caught leaking, stipulates the new law, could face as many as 10 years in prison.

Putting a tight lid on these kinds of unseemly radioactive emissions is especially important in light of the recent awarding by the International Olympic Committee of the 2020 Summer Games to Japan – a sort of pity plug for the situation the country has been plunged into by the nuclear disaster the government worked so hard to obscure.

Olympic pressures to shut up are not just Japan’s problem, and are something that bring it closer in spirit to its neighbor, Russia – an irony not lost on Nils Bøhmer, Bellona’s general director and nuclear physicist. He noted that Japan’s potential new law smacked of that not so post-Soviet sensibility in Russia of  “dictating the truth and by making it illegal to tell the truth.”

The screws being put to Russian civil society activists and journalists in the run up to Sochi’s 2014 Winter Games to gouge out their eyes (or have them gouged out) over the massive environmental and social ruin Russia’s Olympic preparations have entailed and the massive corruption it has enabled is, according to international rights activists, unprecedented.

Add that the Russo-Soviet phobia to the truth about to nuclear disasters from accidental nuclear submarine sinkings, fires at ship repair yards, temperamental nuclear power reactors, a massive explosion at Chernobyl, the jailing of activists who draw attention to environmental and rights problems and the gagging of NGOs with President Vladimir Putin’s “foreign agent” law, and Tokyo and Moscow could become kissing cousins by the candle light of an Olympic torch.

The current condition of the Fukushima Daiichi plant is precarious – arguably worse off than it was directly following the initial catastrophe, during which the plant lost all primary and back up cooling, leading to three reactor meltdowns, hydrogen explosions, vulnerability of spent nuclear fuel pools and a seemingly continuous leaks of highly radioactive water after it was hit by an 11-meter tsunami.

The disposition of the fuel in the melted down reactors is unknown. Efforts to extract spent nuclear fuel from a pool balanced 30 meters above the ground at the No 4 reactor building, which was heavily damaged by a hydrogen explosion, remain piecemeal, and there is as yet no real consensus on what on what might stop or at least diminish the leaks of some 400 metric tons a day of radioactive water into the Pacific.

On top of that, extremely inconvenient reports about worker radiation exposure and rock bottom wages for performing lethal work at the plant keep emerging from the lips of poorly paid subcontractors.

As plant owner Tokyo Electric Power Co. (Tepco) proceeds with its spit and string efforts to bring this ongoing catastrophe under control, it’s understandable that Abe would like to stuff a sock in the bad news bullhorn from Fukushima.

At the moment, all of Japan’s 50 nuclear reactors are shut down as they undergo stringent safety tests by the country’s new regulatory agency, which may result in many of them being chucked as unfit for operation.

Yet, Abe has promised a bright, safe nuclear future to a Japanese public that could largely care less about that, and, in fact, opposes it.

Tepco and several echelons of the Japanese government have, meanwhile, over the last two years and eight months, distinguished themselves as some of the most unreliable organizations in the world, most significantly in their connivance to withhold radiation data from the public and the world in the disaster’s immediate aftermath. The lie by omission sent thousands fleeing Fukushima’s fallout directly into its path.

Taro Yamamoto, a lawmaker in Japan’s upper hose of parliament told a Tokyo news conference Wednesday that the government’s role in hiding radiation information showed it was predisposed to hiding information from its citizens and this law would only make things worse, according to the newspaper, The Australian.

Meanwhile Tepco’s continuing post-Chernobyl Soviet-style campaign of disinformation, misinformation, incompetence, and secrets kept that have later been blown by the press has put its credibility under serious attack, if not destroyed it altogether.

And this is the company charged with the 40-year task of decommissioning the still smoldering remnants of the world’s second international nuclear catastrophe. Abe’s government has floated notions of taking Tepco off the job and supplanting its duties with a government agency, or a totally transparent independent contractor.

Bøhmer has favored the later approach. But with the new secrecy bill on the floor of the Japanese parliament, Abe seems to have a different tilt.

“In the situation that Japan is in after the Fukushima accident, it is essential for the government to build up trust and confidence among the public, and this law will be a setback in rebuilding that trust,” Bøhmer said. “In order for the public to trust the authorities, the information they supply must be transparent and trustworthy.”

This would be an unenviable position for Japan, seen as one of the world’s most reliable democracies. But pushers of the secrecy law seem satisfied with the notion of that image being transmogrified into the familiar footage of police paddy wagons bearing away environmental protestors, or the smoothed over biographies of assassinated reporters that are such a feature of Russia.

Putin’s NGO law has further obfuscated the results of any elections taking place in Russia by crushing independent, non-governmental vote monitoring agencies, casting doubt over whether the country is a democracy at all.

Meanwhile, NGOs that focus on environmental issues, like Bellona, have received their fair share of visits from prosecutors, tax inspectors, fire marshals, building regulators and other motley assemblies in search of any violation.

Other NGOs – especially those that try to bring down sacred cows like the Sochi Olympics – have seen their organizations shattered, their activists jailed or set into lives of exile abroad.

Such NGOs are receiving clear messages they will be bundled out of the country like disgraced spies for bearing negative witness to, say, a leak at a nuclear reactor, or a botched job extinguishing a nuclear submarine rescue.

In Russia’s case, laws and statutes on maintaining secrecy have even, in their turn, lead to secret laws.

Former submarine captain Alexander Nikitin, who helped the Bellona expose the dangers lurking in Russia’s Northern nuclear submarine fleet, ran afoul of a few of these secret laws himself when, in 1995, he was arrested by the Federal Security Service, the KGB’s successor organization, for contributing to Bellona’s report on Russia’s nuclear navy.

He spent five years battling espionage and treason charges before becoming the single person to ever win a court case against Russia’s shadowy security services. .

Hundreds of others who endeavored to expose necessary truths about the “new” Russia have not been so lucky, and “political prisoner” remains an active part of contemporary Russian vocabulary.

If Japan’s secrecy law goes through, there could well be a proliferation of Nikitins, this time along the Pacific Rim as those who would dare to leak as much as Fukushima attempt to bear witness to one of the world’s greatest ongoing nuclear catastrophes.