MURMANSK – Without any of its own drilling installations in the Arctic, and in the face of constant delays to oil recovery at continental shelf fields, Russia is still champing at the bit to draw Arctic black gold. The venture depends on contemporary technology supplied by foreign partners against a backdrop of ecological outcry over the absence of spill cleanup contingencies, as well as colossal tax subsidies for oil majors willing to tackle the elusive project.

Published on November 25, 2013 by Anna Kireeva, translated by Charles Digges 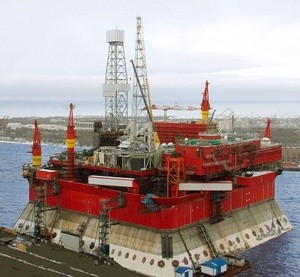 “As of today, Russia does not have one practical, working drilling installation for work on the Arctic shelf,” said Mikhail Grigoriyev, a member of the federal Russian Safety Council, while addressing an annual international conference here in Murmansk last week.

Russia also lacks practical power sources for shore-based oil refining and shipping infrastructure, which the Kola Nuclear Power Plant’s director has offered to supply with aged and dangerous reactors. Old notions of powering the now-shelved Shtockman gas condensate field in the Barents Sea with energy from the Kola plant and the help of floating nuclear power plants were scrapped as the project lost steam.

But new plans by Russia’s state nuclear corporation Rosatom to keep the oldest reactors at the Kola plant churning away might make the surplus energy produced by the reactors more attractive to other investors in Arctic oil projects. Conversely, the Kola Nuclear Plant is anxiously waiting for the drilling to begin, and seems to be staking its future revenues on the holy grail of Arctic oil.

Representatives of Norway’s Statoil, ExxonMobil Russia, Gazpromneft-Sakhalin, Gazprom shelf recover and even the last gasps of Shtokman Development – the now-disbanded consortium for developing the Shtokman field – participated in the seminar.

Statoil, naturally, announced that it was eagerly looking forward to cooperation with Russian oil monopoly Rosneft in working the Norwegian continental shelf. In May 2012, Statoil signed off with Rosneft in a ceremony attended by president Vladimir Putin to explore hundreds of thousands of square kilometers in the Barents Sea .

Norway’s state oil company is involved with various projects on the shelf at the Kharyag, Pereseyevsk and Severo-Komsomolsk fields, as well at a number of other licensed plots in the Sea of Okhotsk. It’s also participating in experimental shale oil projects in the Samara Region.

ExxonMobil, along with Rosneft, is involved in developing 10 offshore fields in the Kara Sea, the Chukchi Sea and the Laptev Sea.

Of course, the representatives of the oil companies spoke of their high hopes for the Arctic’s resource potential – and that environmental safety was always foremost on their minds. None of them denied the complexity of operations in Arctic conditions and the necessity of using the most state-of-the-art technology.

But the companies’ approaches to these practical issues differed dramatically.

Only Svein Age Dalh Olsen, Statoil’s director for public relations, had the backbone to mention that a number of companies and countries are refusing to have any dealings in the Arctic.

He briefly let slip that: “Several arctic projects were delayed because of technological and economic issues.”

Cold feet in the Arctic

This allusion partly centers on British Petroleum (BP), which in July 2012, announced it would be postponing its Liberty project in the Beaufort Sea, off the northern coast of Alaska and Canada’s Yukon Territory because it didn’t have the funds to ensure environmentally safe initiation of its projects.

Then, in August of 2012, the consortium holding up the vaunted Shtokman Project in the Barents Sea unraveled, as representatives cited runaway costs and an inability to hammer out the dents in its investment plan.

The same month, Statoil North America – a subsidiary of the Norwegian Statoil – likewise said it would not be producing oil off the coast of Alaska in the Chukchi Sea until probably 2020.

In September, 2012, France’s Total swore off initiating any drilling projects in the Arctic altogether. Total CEO Christophe de Margerie told reporters that chances of an oil spill in the Arctic are simply too high, and that cleaning them would be next to impossible.

In February, 2013 Royal Dutch Shell also said it was postponing drilling in those areas over glaring safety reasons it had been wrestling throughout 2012. Norway, meanwhile, extended its moratorium on oil drilling in the region of the Lofoten Islands.

The Bellona Foundation has on numerous occasions reiterated its position that it is categorically opposed to any drilling in the Arctic. But, as the organization is not able to stop this process by itself, it will commit itself to ensuring oil companies observe the highest ecological standards and use the most advanced technologies.

It’s unfortunate to reach the unavoidable deduction that Russian companies are averse to discussing technology, oil spill response, and any other complicated issue that, by necessity, needs to be addressed in any serious dialogue about Arctic drilling.

This distaste for such subjects is papered over with slogans about “openness to dialogue,” stentorian finery about “the priorities of ecological safety,” promises to “apply the most contemporary technology” and tall tales about complete, infallible “preparedness for oil spills in icy Arctic conditions.”

“It is simply remarkable that the creation of an (oil spill) response base is underway for the entire Arctic territory, but we will only see the result of this tomorrow, and we are going to be drilling today,” said Alexei Kucherovsky, head of the administration for industrial, ecological safety, labor safety and civil defense for Gazpromneft-Sakhalin, again trying to confirm the preparedness of Russian oil and gas companies to work the Arctic without a corresponding infrastructure or mechanism for rapidly responding to emergencies.

Another example of this is the situation surrounding Gazprom’s Prirazlomnaya rig, which has become synonymous with Greenpeace’s September protest against it, and which has resulted in charges of hooliganism filed against all 30 people aboard the organizations Arctic Horizon vessel.

Drilling deadlines at the Prirazlomnyaya field have repeatedly been delayed over the last two years. Recently, Gazprom Neft Shelf, Gazprom’s offshore oil division, swore that drilling would begin by the end of 2013. But, according to Kucherovsky, this drilling is now scheduled to begin in early 2014.

Developing the Arctic Shelf will require a substantial land-based power infrastructure. There are currently plans afoot to crib electricity for offshore oil operations from the Kola Nuclear Power Plant, which, even working below its full capacity, produces more energy that the Murmansk Region requires.

“The Kola Peninsula’s energy system has a significant amount of power that is currently not in demand, but which can be used for the land-based infrastructure of future Arctic projects,” Kola Nuclear Power Plant Director Vasily Omelchuk, told the seminar. “The Kola Nuclear Power Plant produces some 10 billion kilowatt hours per year, and could even produce 14 billion.”

It wasn’t without a little pride that he told the seminar about the Kola Plant’s facility for processing liquid radioactive waste, which went into operation in 2006.

“Now, we can reduce the amount of liquid radioactive waste by processing a larger quantity of waste than we produce,” Omelchuk said.

He added that he would like to see the Kola Nuclear Plant operating at full throttle to produce the 14 billion kilowatt hours a year he’d been talking about – but for that, he’d need either new customers or a switching station that would allow him to deliver electricity to neighboring countries and Regions.

Several projects to build and reconstruct electrical transmission lines to Karelia and Finland have be tabled, but their commencement has been delayed. The Leningrad Region has no demand for so much electricity and Norway will not buy energy from the Kola Nuclear Power Plant for reasons of politics and safety.

The Kola plant’s management has therefore been counting on the start of Arctic oil projects to keep its operation alive.

But the Kola plant is in far from ideal shape. Kola’s reactor Nos 1 and 2 are already operating on extending engineering lifespans that expire in in 2018 and 2019. Both reactors reached their original expiration dates in 2003 and 2004, respectively.

Under a currently revised “roadmap” for reactor construction and shut downs by Russia’s state nuclear corporation Rosatom, the two units are not even scheduled to shut down in 2018 and 2019, as was planned under the original Rosatom “roadmap” from 2008. The new 2013 roadmap, obtained by Bellona, shows no reactor closures at all by 2024.

“We would like to keep all four working reactors and plan to extend the operations of the Nos 1 and 2 reactors,” said Omelchuk.

“They will be needed for the development of the Arctic,” he said.

Charles Digges contributed to this report.