MOSCOW – Baltic Nuclear Power Plant (NPP) – a new station that has been under construction in Russia’s westernmost exclave of Kaliningrad Region since 2010 – still has no backing from private investors, nor any sales contracts to export future power to neighboring countries. European Union (EU) states there are no intentions to invest into power delivery infrastructure to buy the plant’s electricity. Two-plus years of meager marketing progress seem to cause doubt as to whether construction of a second unit makes solid economic sense.

Published on April 22, 2013 by Andrey Ozharovsky 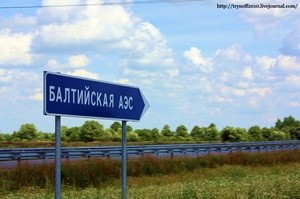 For the Baltic Nuclear Power Plant, under construction in Neman District, Kaliningrad Region, the issue of where to sell future electricity is still one of the most pressing. The two-unit 2,300-megawatt project developed for a region that is neither capable of (owing to the aged transmission and distribution infrastructure in place), nor particularly interested (because of sufficient power supplies) in, accommodating the enormous inflexible electricity deliveries of a baseload nuclear power plant apparently envisions producing electricity for no other purpose than selling it for export, either to Lithuania or Poland.

This is also the first nuclear power plant project that suggests participation of foreign investors, up to 49% of equity in the future plant. But at a recent round table discussion in Neman that focused on the prospect of building the second unit at the site, Baltic NPP director Buchelnikov seemed to offer no hard proof that any progress had been made securing a private investor or any electricity export contracts for the station.

That the Neman-based project is export-oriented as well as meant to provide electricity supplies within the region is stated, for instance, on the website of INTER RAO UES, the Russian power generation and electricity trading company that supplies energy both to domestic and foreign markets.

In March 2011, INTER RAO UES, as this company statement read, “signed an agreement with INTER RAO Lietuva (Lithuania) to export electricity that will be generated at the Baltic Nuclear Power Plant currently under construction. This agreement will help the company expand its electricity export operations beyond Kaliningrad [Region] and facilitate signing of future long-term electricity trading contracts.”

“Baltic Nuclear Power Plant will provide electricity to Kaliningrad [Region] and for export sales,” the statement adds in background information about the station.

And the Baltic NPP page on the website of Russia’s nuclear power plant operator company Rosenergoatom Concern (in Russian) says that “[t]he main goal of construction of Baltic NPP is ensuring energy security of Kaliningrad Region in the long term” but that “owing to its unique location, Kaliningrad Region has excellent opportunities to export electric energy to EU countries.”

“In that regard,” the page further says, “the Baltic NPP project is an important element of the energy system of the entire Baltic region. The project is fully in line with EU energy policies and is on the agenda of the Russia-EU Energy Dialogue.”

The EU-Russia Energy Dialogue was established in 2000 with the objective “to provide reliability, security and predictability of energy relations on the free market in the long term and to increase confidence and transparency on both sides,” according to the initiative’s description on a page in the European Commission’s Energy Strategy section.

That said, the statement that the Baltic NPP project “is fully in line with EU energy policies” does not quite find confirmation in reality.

For instance, in reply to a request by the Kaliningrad-based Initiative for a Referendum on Baltic NPP Construction (in Russian) to provide information on the European Union’s intentions regarding possible purchases of Baltic NPP’s future electricity, Inge Bernaerts from the European Commission’s Directorate-General for Energy said that building transmission links for electricity deliveries from Baltic NPP does not qualify as a “project of common interest” for the European Union.

“As regards InterRAO proposals for interconnectors from Kaliningrad with the neighbouring Member States of the European Union […], I would like to inform you that, at this moment, the procedure to grant those project a status of so called ‘projects of common interest’ is not pursued further due to the position taken by the concerned Member States of the European Union,” Bernaerts’ letter said, as quoted by the Baltic NPP Referendum Initiative.

Any plans for deliveries of export electricity from Kaliningrad Region would incur substantial expenditures to upgrade the existing connections and build new transmission links, additional substations, and other required infrastructure to connect the region with the neighboring nations of Poland and Lithuania.

The Baltic NPP Referendum Initiative website writes (in Russian) that three energy infrastructure projects, two with suggested implementation date by 2018 and one, by 2016, had been submitted by INTER RAO UES to the European Commission for public consultations. On the European Commission’s energy website, these three are listed under Electricity Projects among projects submitted to be considered as potential Projects of Common Interest in energy infrastructure for the now closed consultation period between June 2012 and October 2012.

Specifically, these were to provide for three cross-border interties:

-a back-to-back high-voltage direct-current link between Kaliningrad Region’s Mamonovo and Poland’s Elblong, with the converter station located at Mamonovo substation and a 400-kilovolt alternating current overhead line to connect the back-to-back station to Elblong substation in Poland, for an interconnection between the Kaliningrad Region Power System and Poland Power System. Power transfer was suggested at 500 to 1000 megawatts. 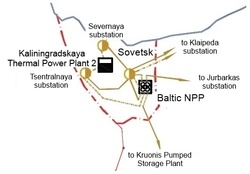 A hopeless search for investors and customers

“A distinct characteristic of Baltic NPP,” says the station’s official page on Rosenergoatom’s website, “is that it is a pilot NPP construction project in Russia that provides for participation of foreign investors (up to 49% of the NPP may be offered for purchase to foreign companies).”

Yet, there still seem to be no investors eager to get involved with the project. Furthermore, energy companies in neighboring Lithuania look just as hesitant about going into electricity supply contracts to purchase power from the plant, under construction just 10 kilometers from the Russian-Lithuanian border.

The only agreement concluded so far has been with the Lithuanian outfit INTER RAO Lietuva – something that is often presented as proof that Lithuania has demand for Russian nuclear electricity from Kaliningrad.

INTER RAO Lietuva, as the company description on its website says, is one of the largest independent suppliers of electricity in Lithuania, with assets in wind power and operations in neighboring Latvia, Estonia, and Poland. But besides this company, there seem to be no other customers that have stated an express interest in sales contracts for future import of Baltic NPP electricity.

Baltic NPP director Buchelnikov, at the round table that took place in Neman in late March to discuss prospective building of the second unit at the site, was sparing in his offer of any hard evidence that the efforts to secure sufficient foreign interest for the station have been fruitful.

Buchelnikov’s answers to Bellona’s questions about Baltic NPP prospects are rendered here as per a transcript of the recorded conversation (in Bellona’s translation):

Buchelnikov: This has not been just said. This provision is formalized in a government decree in accordance with which construction of the station was started. This is indeed so. For the first time in the industry, [a project] was permitted to open up and attract investments, including foreign ones. But these don’t necessarily have to be foreign investments. 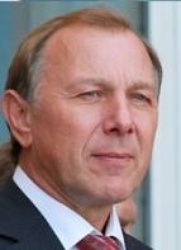 In truth, because this is a new issue, not a simple one[, n]egotiations are being held constantly.

In fact, there are [interested parties]. These are large European energy systems. But in order to create a pool of proposals, a whole number of amendments needed to be introduced, including into the federal legislation, into departmental regulations. A presidential decree has already been issued.

Currently, we are working to amend the legislation on atomic energy. As soon as all these decisions have been taken and proposals for investors put into final form, I think we can discuss the specifics.

For the time being, negotiations are being held, and just those issues come up as a result that require the kind of steps that I was talking about.

Bellona: Are there at the time being contracts (or agreements of intent) for supplies of electric power/capacity of Baltic NPP to other countries? If so, to which countries and in which volumes?

In INTER RAO UES’ negotiations, issues of confidentiality are covered right at the beginning regarding such signed agreements.

Which is why I cannot name any specific [interested parties] for this reason. And indeed, I don’t know all of them. But I can tell you with certainty that such talks are being held, and one contract has been signed to date, with INTER RAO LIETUVA. For all the electric power that will not see demand from consumers in Kaliningrad Region.

Twenty-three hundred megawatts in “locked” capacity – what is the rationale?

To be sure, references to ongoing talks and interested investors out there have been heard before. With Baltic NPP head Buchelnikov circumspect about any definitive progress in the station’s search for private investment funds or export sales deals, Russia’s own INTER RAO Lietuva remains the only electricity supplier in the Baltic region that seems to represent any customer demand for Kaliningrad’s nuclear electricity.

And while the 1,150 megawatts of the station’s first unit could more or less at least theoretically be accommodated within the regional grid – provided Kaliningrad Region comes up with the necessary modern transmission and distribution networks and sufficient dispatchable capacity to balance out the system – the purpose of the second unit cannot reasonably be interpreted as anything else other than exporting its power to neighboring European markets.

And the very idea of building a nuclear reactor with no hard guarantees in place of deriving profit from selling its power seems to defy sound economic reasoning. If the reactor is built, but neither Lithuania nor Poland agree to import the power it produces, Kaliningrad Region will have a “trapped capacity” on its hands – a situation similar to that in Murmansk Region, in Russia’s Far North, where reactors of Kola NPP regularly experience downtime on account of lacking demand and “dispatch limitations.”

Rosatom is what is called a “state corporation”: The bad bets it makes are covered by the state budget. Should the Baltic NPP project turn out to be an investment sinkhole – and indications are there that the endeavor will unlikely succeed in recouping its costs – the state will have to absorb the losses. The only trouble is that it will be ultimately Russian taxpayers who will have to foot the bill.