Extending the run-time of aged reactors at the Kola NPP, or build a new plant – decision due in 2013

MURMANSK – Vasily Omelchuk, director of the Kola Nuclear Power Plant (NPP), addressed deputies of the Murmansk Regional Duma with a request to either speed an appeal to Russia’s state nuclear authority Rosatom for construction of the so-call Kola NPP 2 or resolve the question of extending the engineered lifespan of two of the oldest reactors at the original Kola Plant.

Published on December 13, 2012 by Anna Kireeva, translated by Charles Digges 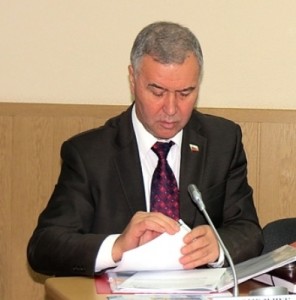 Local fears are that the region will face an energy deficit by 2018 if neither of the measures are implemented.

“There is confirmation of declarations of intent, practically all decisions have taken,” Omelchuk told the assembled deputies during a joint session of the Public Chamber on questions of safe nuclear energy usage in the Murmansk Region held earlier this week. “Rosatom is ready to build the new station today, but the state corporation needs an order – and that we do not yet have.”

The joint session points to strange developments. Rosatom does have construction plans for a Kola NPP 2, which are outlined in the so-called “Roadmap for NPPs of Russia,” and which was developed by Rosatom, not Russia’s regions.  Many regions are seeing the construction of nuclear power plants as compensation for those that are being taken out of service. For example, construction on new plants underway in the Leningrad Region where St. Petersburg is located, and the Voronezh Region south of Moscow. The same is expected in the Kursk region.

And in the Murmansk Region, we are now seeing Kola NPP authorities appealing to the regional parliament their help in supporting the construction of a new NPP for which all of the agreements have apparently been rubber-stamped.

The delay suggests there has bee some serious rethinking of the Murmansk Region’s economy not only by Rosatom, but at other federal levels as well.

The fate of the oldest reactors

The Kola NPP’s reactors Nos 1 and 2 reach the end of their already extended engineered lifespans in 2018 and 2019 respectively. Both reactors were respectively to have shut down in 2003 and 2004.  Their lifespans could be extended again – but this could involve some political considerations.

First, the public resonance to lifespan extensions in the wake of Fukushima has case doubt on licensing extensions for these reactors. “There is a very real possibility we will not be able to  extend the use of Kola NPP’s No 1 and No 2 reactors,” Omelchuk told the joint session.

Whether or not the reactors will receive extensions cannot legally be decided until 2013.

“We must decide whether we want to extend the use of reactors 1 and 2 and remain independent from an energy perspective, having a good base for the development of our industry, or whether starting in 2018 we really start to feel an energy deficit in our region,” said Omelchuk underscoring his belief that no other energy sources besides a Kola NPP 2 were viable.

From a technical perspective, the old reactors at the Kola NPP lack a hermetic chamber protecting the environment from a release of radiation into the atmosphere during an accident – a deficiency suffered by all  currently operating Russian reactors. The Kola NPP is also not built to withstand impact from an aircraft of more than five tons – or any Boeing flying out of Murmansk.

“Such were the norms and rules of the years when the station was built,” said Omelchuk. “But there are compensatory measures that would guarantee the safety of these reactors in such an eventuality.”

Dramatizing the situation somewhat, Omelchuk noted that if the reactors’ lifespans are not extended, Murmansk will not be able to rely on energy from the central energy system because one million kilowatts produced by two reactors will be taken off the country’s Northwestern grid.

Omelchuk was here referring to the Leningrad NPPs reactor No 1, which, owing to swelling in its graphite moderator, has been shut down for more than a year. Whether the reactor will be shut down for good will be decided next year. The  resources of the plants No 2 reactor will also soon be exhausted.

“As the manager of the Kola NPP, I am certain that we have the appropriate conditions to extend the lifespans of reactors 1 and 2, but this doesn’t depend only on me. If we today take the decision and the Murmansk Region becomes the initiator of a new nuclear power plant, then by 2023-2024, then we can have such substitute power,” said Omelchuk.

While telling the regional deputies abut the perspectives for building a Kola NPP 2, Omelchuk began by saying that the site has already been selected and that it is located next to the current plant, and that in principle, everything is set for construction of the new plant. Only the willingness of the region is required. However, as came to light during the joint session, only Rosatom seems to be willing to build anything. But Rosatom is currently building 1250 megawatt nuclear power stations. Building such a plant on the Kola Peninsula is senseless because the local energy system can only withstand power units of up to 800 megawatts.

There are, at current, reactors of 500 megawatts in development, but they will not be ready for another two to three years and will cost some three billion roubles ($97.7 million).

“This [time and money] also poses no problem because Rosatom is ready to perform the work – all it needs is a customer,” said Omelchuk. But so far, no one has placed an order for such a project.

Insisting that Murmansk be that customer, first for development, then for preparation and construction of the experimental installation, Omelchuk spoke of neighboring regions aspirations to build nuclear power plants but are for whatever reason refused.

“The head of Karlelia appealed to the President for the construction of a nuclear power plant in his republic, but he will likely be refused because he has, from one side, the Kola NPP and the other the Leningrad NPP” said Omelchuk. “Therefore, the government of the Murmansk Region needs to hurry with an appeal to Rosatom for the construction in our region of the Kola NPP 2, the money for which [Rosatom] will find. They are waiting, and there is no time.”

He also noted that if the construction of a new nuclear power plant begins in 2016 – at the most optimistic – then it would be built within seven to eight years time.