BALAKOVO, Russia – In an important victory for activists, a public hearing spoke out against an experimental increase of the power output of reactors at Russia’s Balakovo Nuclear Power Plant (NPP) beyond their design capacity and demanded that a referendum be held on the fate of the plant.

Published on June 27, 2012 by Andrey Ozharovsky, translated by Charles Digges 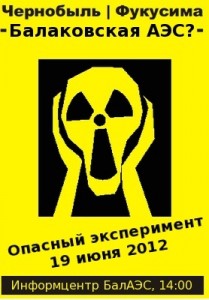 It was also confirmed during the June 19 hearing by the plant’s chief engineer, Valery Bessonov, that the Balakovo plant – located 940 kilometers southeast of Moscow in the Saratov region – has a severe, possibly fatal design flaw: serious sinkage in the foundations of the buildings housing reactor Nos 1,2 and 4 that reaches up to half a meter.

Reactor No 3’s building is built on a foundation that is skewed by 540 millimeters.

Balakovo NPP claims the foundation sinkage occurred during the initial construction stage, and that they corrected the tilt by installing the reactors in such a way that the list was righted.

But this is by no means industry norm, said Bellona General Director and nuclear physicist Nils Bøhmer.

“This is an extraordinary situation ­­– I have never heard of anything like it,” said Bøhmer.  ”This is an extreme circumstance that could lead to an accident, and the IAEA {International Atomic Energy Agency] needs to review the construction of this plant.”

The nuclear industry, meanwhile, is trying to whitewash the civil and peaceful protests of ordinary of citizens against the power boosting experiment, which may stoke already smoldering social tensions in Balakovo.

Of 32 people who spoke out during the public hearing, only 10 supported the idea of operating the reactors beyond their design capacity.

The majority spoke up about their doubts in raising the power capacity of the reactors. One of those gathered demanded a cessation to running at excessive power rates, to quit having public discussions about manifestly dangerous projects and insisted on a citywide referendum about whether Balakovo NPP should even continue to operate.

There are numerous technical problems and dangers to experimentally operating Balakovo’s reactors at a level exceeding their norm ­– not the least of which is their skewed foundations.

The position of Rosatom, Russia’s state nuclear corporation, however is that the designers of nuclear power stations operating VVER-1000 type reactors did not take into account all the characteristics of their design and unjustifiably lowered the power thresholds of the reactors.

Opponents say that hiking up the power results in an increased load, and that leads to more hazardous conditions, a rise in radionuclide emission, wear on equipment and the risk of a serious accident.

The problems surrounding the suggested experiment were described on the eve of the hearings by two local newspapers. Natalya Rudenko, chairman of the Balakovo branch of the All Russia Society for Nature Protection (VOOP in its Russian acronym) called on town residents to take part in the hearing. Environmentalists posted announcements throughout the town providing its date and time. The nuclear industry did not do the same. Even on Balakovo NPPs official website, there was no information about the hearing.

The event was officially called “Public Hearing on Preliminary Environmental Impact Assessment on the Operation of Reactor No 3 of Balakovo NPP at 104 Percent.”

It was organized by the administration of the Balakovo municipal region with the cooperation of Rosenergoatom, the division of state nuclear corporation Rosatom that is responsible for nuclear reactor operation in Russia.

It is difficult to say what possessed the organizers when they chose a hearing room that was half filled by a round table that seated a mere 30 people. More chairs were set up along the walls, but were immediately occupied when the hearing opened its doors. Some 100 people participated in the hearing, many of whom had to stand in corridors and crowd around doorways.

Security at one point tried to prevent others from entering, citing a lack of space and telling people the room was “stuffy.” But insistent citizens still managed to squeeze in. The hearing began at 2pm and lasted four and a half hours.

Oleg Romanenko, deputy chief engineer at Balakovo NPP, said that reactor No 2 at the plant had been run at a capacity beyond its norm beginning in 2008. The first reactor at the plant to be involved in the experiment, the No 2 reactor operated at 104 percent normal capacity until September 2011.

At present, all four reactors at Balakovo NPP are running at 104 percent, with the first, third and fourth operating in test capacity mode – a state in which a reactor is operated above it’s norm, but for a short period that requires no special permission, public hearings or environmental impact assessments.  It is only when full experimental capacity will continue long term that hearings and impact studies are required

Raised capacity not leading to spike in output

It is interesting to note that according to the Balakovo NPP’s information center (in Russian), “reactor Nos 1, 2 and 3 are operating at a gross load of 2680 Megawatts.” The gross load of reactors operating above normal capacity is 3120 Megawatts. Therefore the station’s output is 440 Megawatts short, meaning that those who say the area is replete with energy are correct, or that there is a low demand for electricity at present.

During the question and answer period at the hearing, chief engineer Bessonov announced that 104 percent capacity was hardly the limit, and that “further power boosts to 107 percent are possible.”

Valery Novak, deputy director of the construction and design division at Rosenergoatom, spoke of the another ongoing experimental preparation for the plant’s reactors – extending their engineered lifespans by two times for a total of 30 more years of operation.

The ten who spoke out in favor of the experiment

Victor Ignatov, Balakovo NPP’s director, amazed participants of the hearing by saying his plant, in his opinion, was “the cleanest area in the region.”

Dmitry Yerak a representatives of the Kurchatov Maritime Institute and Vladimir Khrustalyev of the Saratov State Technical university, and Analotly Lemeshkin, Anatoly Zemlyansky and Valery Parkhomenko from the town’s public chamber spoke out in favor of raising the power output at Balakovo NPP. Parkhomenko in particular seemed puzzled that the majority of those gathered where against the atomic industry’s scheme.

“If so many people have been gathered, then it means you are representing the entire city,” said opponents of the NPP.

Plant supporters hardly felt comfortable among the throngs at the hearing.

Another five participants neither supported nor condemned the experiment, saying that experts in the nuclear industry should be left with decision, not common citizens.

“Let the specialists decide,” said a passionate Tatyana Urkova in her appearance. “It’s interesting to spent time with nuclear professionals – they know how to spent their leisure time.” 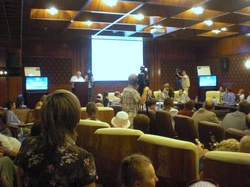 The arguments of those who spoke out against raising the power output of the plant seemed to have a more targeted and informed strategy, and the passion of their appeals made clear they aimed to convince atomic industry representatives to abandon the experiment.

The VOOP’s Rudenko asked in her appearance, “Why should the power be raised if the region has no demand for extra electricity?” She continued, saying that, “It is dangerous because operating a reactor beyond its power norm increases the stress on the reactor’s chamber, pipe-works, and other necessary safety elements […] An increase in thermal power unavoidably leads to decreased safety and an increase in the eventuality of an accident.”

She suggested putting the NPP’s activities to a popular referendum.

Nina Filatova, a local who lives three kilometers from Balakovo NPP, told the hearing: “What has the NPP given us – only radiation. Don’t believe the nuclear industry. I don’t believe them and I advise you not to believe them either. Was Chernobyl not enough for you?”

Pensioner Anna Vinogradova said that, “in the end the expert committee for the environmental impact assessment on raising the power output of reactor No 2 shows a lack of any assessment about possible accidents, irregular occurrences from the point of view of their degree, character and the scale of their ecological consequences,” adding that the NPP “emits radioactive tritium, which causes leukemia.”

“I’m 18 and I was born in Balakovo and live here,” said Maksim Gerasimov. “I don’t want a tragedy like Chernobyl or Fukushima repeated in my city. Your arguments have not convinced me […] Return the reactors to their normal power levels.”

Marina Yeryomina, editor of the local newspaper Stubborn Facts called for the referendum as well, and demanded not only an end to the experiment but the shuttering of Balakovo NPP altogether.

Khalil Zakirov, who participated in the Chernobyl clean up said, like Vinogradova, that the state environmental impact study did not satisfy federal requirements.

“Shame on Rosatom for presenting such insufficient documents for discussion,” he said.

A public hearing with no dialogue

The framework of the hearing did not allow for in depth discussion of any of the public’s most worrisome questions. First citizens listened to the nuclear industry, then the nuclear industry listened to the public and answered questions. Such an approach hardly allows for dialogue. Making that point was Rosenergoatom’s Novak, who announced: “This is a public hearing, not a discussion.”

As a consequence, discussion points such as how to deal with possible accidents, radioactive waste and spend nuclear fuel build up, the effects of the NPP’s emissions on human health, the reason for even conducting the experiment, and economic questions were left unaddressed.

Rosatom, in any case, is not interested in dialogue. Following its sad tradition, Rosatom is trying not to notice that the majority of the hearing’s attendees oppose the nuclear industry’s proposed experiment and consider it dangerous and superfluous.

Balakovo NPP’s information center published a statement on its website (in Russian) on the results of the hearing that did not even take note of the vociferous public opposition – an attempt to conceal the fact that participants are against the experiment.

“Atomic energy proponents were in a very awkward position – the hearing showed that Balakovo residents are against their experiment,” said VOOP’s Rudenko, summing up the hearing.  “The local government should not ignore that fact. They should conduct a referendum or an official poll. If the public’s opinion is not accounted for, it will only lead to an escalation of social tensions,” she said.