The public hearing convened in the Central Russian city of Dimitrovgrad to discuss the State Nuclear Corporation Rosatom’s project of a new experimental nuclear power plant (NPP) in that city ended in a scandal: In violation of the accepted procedure, the organisers chose to ignore the participants’ most poignant questions. Environmentalists believe this speaks to the plant’s potential danger and confirms the project has not been duly thought through. Earlier, Russian ecological organisations issued a critical statement on the project and urged the government to abandon the plans

Published on August 2, 2011 by Bellona, translated by Maria Kaminskaya 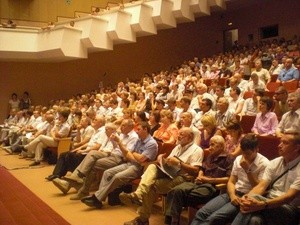 Rosatom is planning to build in Dimitrovgrad, a city in Ulyanovsk Region on the river Volga, an experimental small-capacity nuclear power plant with a lead-bismuth-cooled reactor. The reactor they chose for the plant is an SVBR-100, a model based on a sixty-year-old naval design with what environmentalists point out was a less than impressive service record.

The public hearing organised by Rosatom took place on July 29 and was meant to present to the locals the materials of a preliminary Environmental Impact Assessment report on the future plant.

The existing protocol clearly establishes the order of forwarding questions and receiving answers to them during the hearing:

“7.6.1 Questions pertaining to the subject of the public hearing can be forwarded via the public hearing’s secretaries in written form, using a blank form sheet the participant receives when registering for the hearing.

7.6.4. Answers to questions forwarded by participants of the public hearing are given by competent specialists when all reports scheduled to be heard have been presented at the hearing.”

However, the hearing’s organisers went against the protocol they themselves had signed up for: Out of the approximately twenty questions posed at the hearing, only those that did not touch on especially uncomfortable issues for the project presenters were chosen to be answered. Questions that had to do with both potential – such as the impact of a plane crash – and real accidents, those that happened on board of Soviet nuclear submarines that used this type of reactor, or with recent research data that indicate a risk of rising leukaemia incidence among populations residing near nuclear power plants, were completely ignored. The atomic officials charged with running this public hearing did not even read these questions aloud.

“No answers were given to any of the six questions I had forwarded in written form at the beginning of the hearing,” said Bellona’s nuclear expert Andrei Ozharovsky, who had come to Dimitrovgrad specially to take part in the hearing. “I have participated in many hearings on NPP-related projects and I can say that, before, at least some perfunctory answers used to be given. It’s possible the organisers were afraid of discussing the information contained in [my] questions: On the high proclivity the proposed lead-bismuth reactor has to accidents, on accidents that a crashing airplane could cause, on the dangers of small doses of radiation, on the facts of increased leukaemia incidence in the vicinity of NPPs.”

Idle chit-chat instead of a dialogue

The protocol stipulates that after two hours of reports, time must be allocated for a Q&A session. But the atomic officials only gave their answers to the questions they “liked” best, ignoring those that must have felt “uncomfortable.”

When the moderator announced the beginning of the Q&A session, the floor first went to Vladimir Troyanov, who heads the Dimitrovgrad-based State Scientific Centre “Scientific Research Institute of Atomic Reactors” (NIIAR, in its Russian acronym).

Troyanov answered one question regarding plugging the future reactor to the grid and then went off on a soliloquy about the course of the hearing. He also amazed the audience with a proposition that “a beyond-design-basis accident is something that cannot happen, period.” It is, meanwhile, precisely the risk of a beyond-design-basis accident that environmentalists are most worried about, and for good reason: Both the accidents at Chernobyl and Fukushima were also deemed something that “cannot happen” – before they did. The problem with nuclear power is exactly that what is unheard-of sometimes happens and that severe beyond-design-basis accidents, associated with massive releases of radiation and forced evacuations of the population, do occur regularly in different countries at nuclear power plants of different types or generation.

Another Rosatom representative, Sergei Boyarkin, then took the floor to respond to the audience’s questions, but limited his answers to asserting that the SVBR-100 model belonged to the so-called “fourth-generation” series.

“There is no need for accident scenarios – there will be no release of radiation, even if everything’s destroyed,” Boyarkin said.

But in their critical statement issued on the eve of the public hearing, Russian environmental organisations – the Dimitrovgrad-based Center for Assistance to Citizen Initiatives, Greenpeace Russia, and Bellona – pointed out that the original naval design proved highly unreliable and prone to accidents even as it was operated on board of Soviet Alpha-class nuclear submarines of the 1970s.

They were also dismayed that “the risk of a beyond-design-basis accident has not been ruled out completely,” “that the parameters of a beyond-design-basis accident have been clearly underestimated,” and that none of the facts of the “extremely poor experience of operating lead-bismuth-cooled reactors on nuclear submarines” were taken into account when the project owner’s Environmental Impact Assessment report was drafted on the future plant.

Environmentalists also provided in their statement at least three instances when accidents on board of Soviet nuclear submarines that ran on this type of reactors led to releases of radioactive substances and deaths of crew members.

Retired Navy captain and head of Bellona’s St. Petersburg-based Ecological Rights Center Bellona Alexander Nikitin said the following about the lead-bismuth-cooled reactors’ record in the Soviet Navy in a press release posted recently on the website of Greenpeace Russia:

“Naval reactors with lead-bismuth coolant are more difficult in operation compared to pressurised water reactors. Polonium, which is produced when bismuth is irradiated, increases dramatically the activity levels of the coolant. Which is why when a loss of containment occurs, be it even a very slight one, it leads to grave consequences for humans and the surrounding environment in terms of radiation safety.”

When it was his turn to speak, Rosatom’s Igor Konyshev, who is responsible for the corporation’s work in Russia’s regions, talked about power generation and taxes, but refused to answer any questions posed by Bellona’s Ozharovsky:

These are the questions that are still pending responses from the nuclear corporation:

2.     Why does the Environmental Impact Assessment report say that “No potential accident scenarios have been developed for the fast-neutron lead-bismuth-cooled reactor of a nuclear plant with an experimental-industrial generating unit with the SVBR-100 reactor plant” (Environmental Impact Assessment Report, Page 596)? When will potential accident scenarios be developed?

3.     Will the reactor building of the NPP be able to withstand the fall of an airplane? If so, what kind of an airplane (type, weight, speed)? If not, what are the possible scenarios for an accident that could be caused by such a precursor event?

5.     Why does the Environmental Impact Assessment report not take into consideration data on the statistically proven rise in cancer incidence (especially, childhood leukaemia) in the vicinity of nuclear power plants in Germany, the US, and other countries, such as data from the German state KiKK study? This information serves as evidence to the dangers posed to human health by low and ultra-low doses of radiation caused by “sanctioned” releases of radionuclides from even accident-free nuclear power plants. The Environmental Impact Assessment report must not take into account the sole opinion asserting the safety of small radiation doses without providing consideration to facts that testify to the contrary.

6.     Will the project of Dimitrovgrad NPP with an SVBR-100 reactor plant be subjected to stress tests based on European methodology?

Bellona intends to address these questions personally to Rosatom’s Konyshev and publish his answers if any are given.

Grounds to revoke the hearing’s results as invalid

Bellona’s legal department is presently examining the issue of whether the hearing’s results could be declared void because of the clear violation of not just the protocol accepted for the hearing, but also of the citizens’ right to ecological information, which is guaranteed and protected by the law.

According to the Environmental Rights Center Bellona’s legal counsel Nina Popravko in St. Petersburg, “such behaviour on the part of the organisers runs contrary to the legislation in force in the Russian Federation. Citizens of the Russian Federation are entitled to the constitutional right of obtaining information they pursue an interest in, with the exception of information protected by the law.”

Popravko cited two federal laws, on state secrets and the use of nuclear energy, which stipulate that information pertaining to the state of the natural environment is not subject to security classification and that “one of the main principles of legal regulation in the field of application of atomic energy is the availability of information related to the application of atomic energy, if such information does not contain state secrets,” respectively.

Bellona intends to publish a detailed report on the Dimitrovgrad hearing in the near future.